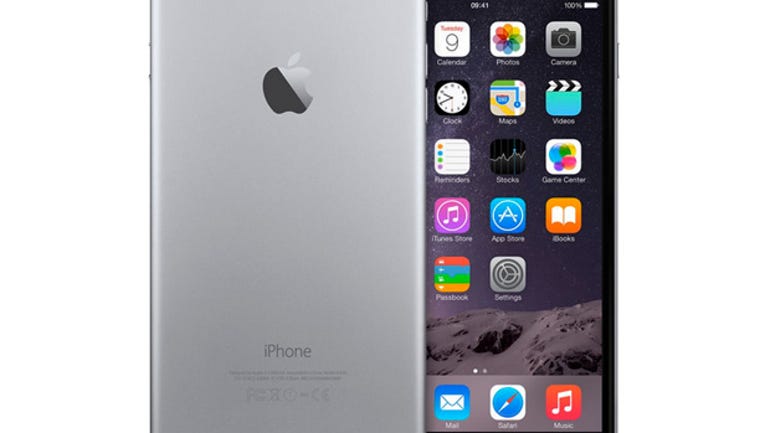 This year, Apple has launched almost -- but not quite -- identical handsets apart from the screen size. We've already evaluated Apple's new 4.7-inch iPhone 6 , and now it's the turn of the larger 5.5-inch iPhone 6 Plus. In 2013, by contrast, we got the premium iPhone 5s and the more affordable iPhone 5c, both with 4-inch displays and both still available (you can compare all iPhone models at Apple's website).

Time was when Apple would have dismissed the idea of a large-screen handset. Then again, this reviewer once thought a 4.5-inch screen was pushing the boundaries. Times and user requirements have changed, and the appearance of a 5.5-inch screen in an iPhone is no surprise. Nor is the fact that Apple has presented it in a near-faultless design.

The physical design is the same as that of the smaller iPhone 6. Button placement is identical with the power button on the right, volume buttons and mute switch on the left. The headset and proprietary Lightning connector are on the bottom edge, along with the handset's single speaker.

Large top and bottom screen bezels are a characteristic of Apple's handsets, but this makes for a tall phone in the case of the iPhone 6 Plus. Compare its 158.1mm height to 150.7mm for the 5.3-inch Sony Xperia T3 , or just 146.3mm for the 5.5-inch LG G3 . The plus side of the large screen bezels is the ease with which you can hold the handset in landscape mode for video watching or gaming, although you do need to take care not to cover the speaker in this orientation.

Sound quality from the single speaker is noticeably better than from the smaller iPhone 6 -- indeed it's among the best we've heard. Having said that, front-mounted stereo speakers might deliver an even better audio experience.

The screen occupies an ion-strengthened glass front that curves down to meet the handset's aluminium edges. These in turn curve into the back of the phone, whose metal expanse is broken by plastic antenna strips, plus the camera lens and TrueTone LED flash unit.

The camera lens protrudes slightly, which means that when the handset is flat on a desk it rocks from side to side as you tap the screen in a way we found quite annoying.

There's nothing Apple could have done about this apart from increase the thickness of the handset, which is not something we'd have liked to see. The 7.1mm-thick chassis is one of the iPhone 6 Plus's remarkable design features.

The thin profile means that even at 77.8mm wide and 158.1mm tall the iPhone 6 Plus feels comfortable in the hand. It has to be said, though, that smaller hands simply won't be able to reach across the screen. Apple has a wheeze to help out in the shape of its 'Reachability' feature, which also appears in the iPhone 6: make two taps on the home button and the screen falls towards the bottom of the handset.

This feels somewhat unwieldy, leaving an empty space at the top of the phone, but means you might just be able to reach the notifications area. I still couldn't stretch across the width of the phone, though. The most elegant and ergonomic solution for one-handed operation on a large screen remains Samsung's screen-shrinkage system used in the Galaxy S5.

Tales of bent iPhone 6 Plus handsets led us to apply quite severe pressure on the handset to see if it would bend. We found the aluminium chassis to be pretty tough: it's undoubtedly possible to bend the phone in your hands, but you'd have to apply a lot of force. In short, we didn't find the iPhone 6 Plus particularly vulnerable or poorly made in comparison to other large-screen smartphones.

There's plenty of processing power behind the iPhone 6 Plus, which, like the smaller iPhone 6, uses the new 20nm dual-core Apple A8 SoC running at 1.4GHz. The 64-bit main processor is accompanied by a motion coprocessor, in this case the new M8, that offloads processing relating to sensor data (accelerometer, compass, gyroscope and barometer) for improved power efficiency. The iPhone 6 Plus, like its smaller sibling, comes with 1GB of RAM.

Internal storage is capped thanks to Apple's policy of not providing a MicroSD card slot. Three sent us the 64GB model, which had 54GB of free capacity. There's no 32GB version: your other choices are either 16GB (likely to leave you with around 11-12GB free), or the most expensive 128GB model. You also get 5GB of free online storage with your iCloud account, which you can upgrade to 20GB, 200GB or 1TB for a monthly fee (see Apple's website for prices).

As with the iPhone 6, Touch ID fingerprint recognition worked flawlessly, although I found it impossible to login when holding the phone one-handed.

Dual-band 802.11ac wi-fi is supported, along with Bluetooth 4.0 LE and LTE mobile broadband -- now with expanded coverage of 20 frequency bands. NFC is also present, but disappointingly it's currently redundant as far as UK users are concerned: it's configured solely for Apple Pay, which is only available in the US at present.

The iPhone 6 Plus's roster of sensors now includes a barometer, which can be used to gather altitude-related data as part of its assault on the health and wellness sector. There's an iOS 8 Health app too, which can aggregate relevant information from a number of sources.

The main 8-megapixel iSight camera offers good autofocus speed (thanks to a new sensor with additional Focus Pixels), 43-megapixel panoramas, a time-lapse video mode, 1,080p video at 60fps and slow-motion 720p video at up to 240fps. The 1.2-megapixel Facetime HD camera, meanwhile, gets improved face detection, a burst mode and HDR video. Optical image stabilisation when shooting video is supported on the iPhone 6 Plus, but absent from its smaller sibling.

Meanwhile, Apple has taken advantage of the larger 5.5-inch screen size to offer some additional keyboard features in landscape mode. Cut, copy and paste tools, full-stop, comma, cursor movement, question mark and explanation mark all make an appearance and can speed up typing. Sadly, though, there's no dedicated number row. However, iOS 8 does support third-party keyboards for the first time, so you can experiment with alternatives such as Swiftkey or Swype.

The 5.5-inch screen has a full-HD resolution of 1,920 by 1,080 pixels, giving a pixel density of 401ppi. Apple calls this 'Retina HD'. You can find higher resolutions -- the 5.5-inch LG G3 , for example, delivers 2,560 by 1,440 pixels for a class-leading pixel density of 534ppi. Still, the IPS screen on the iPhone 6 Plus is superbly sharp and bright, with great viewing angles. If you find text a little small, you can opt to permanently zoom the display, a feature also supported on the iPhone 6.

Like the iPhone 6, the iPhone 6 Plus is powered by the 1.4GHz Apple A8 SoC with 1GB of RAM. We ran a number of benchmarks on the iPhone 5s, 6 and 6 Plus -- and also, for comparison, on a high-end Android phone, Samsung's Galaxy S5 .

Although it's unwise to read too much into mobile benchmarks, these results do indicate that the A8-powered iPhone 6 Plus (and iPhone 6) delivers an incremental speed improvement over the A7-powered iPhone 5s, and that it can more than hold its own against high-end Android handsets in terms of performance.

We found battery life on the iPhone 6 something of a disappointment, but the opposite is true for its larger sibling. During the test period, the iPhone 6 Plus's 2,915mAh/11.1Wh battery kept us going happily for two days, and we think Apple has done a good job of balancing thinness with battery capacity.

While there's lots to like about the 5.5-inch iPhone 6 Plus, we also have some grumbles. The speaker grille is easily covered by the hand, for instance, while Apple's 'reachability' method for accessing the large screen feels like a bit of a fudge. We also still hanker for storage expansion, and the price is high.

Still, the iPhone 6 Plus delivers better battery life and audio quality than the smaller iPhone 6, along with superb design and solid build quality. If money were no object, we'd choose the 5.5-inch model over its 4.7-inch sibling.