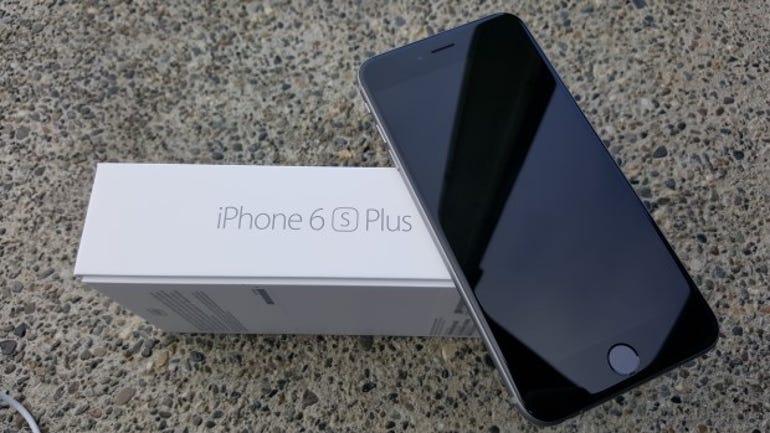 The Apple iPhone "s" models keep the same form factor as the previous model while bumping up the internals. While the iPhone 6s Plus looks and feels like a 6 Plus, there are significant hardware changes making this the most compelling "s" model yet.

The pressure-sensitive display technology is new, higher strength aluminum used to reduce bending, both cameras have been upgraded, the A9 processor is up to 70 percent faster than the A8 model, the amount of RAM has been doubled, the Touch ID button is now lightning fast, you can connect with up to 23 LTE bands, and WiFi up to 866 Mbps is supported. These are just the hardware improvements, but even more is provided in the software.

Despite a display resolution matching last year's Android smartphones, the iPhone display looks fantastic with clear fonts, dark blacks, and good daylight visibility. A 1080p display is perfectly fine for a smartphone and for some reason Apple's looks as good as higher resolution Android devices to my eyes.

It's great to finally see RAM upgraded so that more can be done on the iPhone. It is very disappointing to still see Apple trying to peddle a measly 16GB model and I recommend everyone avoid it or you will likely be disappointed in a month or two when you reach your storage capacity.

I understand the weight gain is primarily due to the 3D Touch technology that required a new display layer to sense and measure pressure. The new display is reportedly twice as heavy as the iPhone 6 display, which also adds to the overall thickness of the new iPhone 6s.

You will still find all the buttons, ports, and cameras in the same place. The rear camera still sticks out a bit from the back. The speaker is still mono, but remains one of the loudest, best sounding speakers I have used on a mobile device. The glass still rolls off the front and down through the edges, which gives it a great look and feel.

There are still large bezels above and below the display with side bezels being a bit wider than devices like the Galaxy Note 5. With the competition having larger displays in smaller form factors, I think this is one area Apple should improve upon in the iPhone 7.

My iPhone 6 Plus battery was awesome and I often wondered how a phone with less capacity than others could get through so much more of my day. The iPhone 6s Plus has a slightly smaller capacity battery, but so far I am getting the same great battery life I did with my 6 Plus. Apple seems better at optimizing battery conservation when the display is off as my Android devices lose battery capacity faster when not in active use. This is important in the way I use my phone in spurts of activity.

I am disappointed to see that Apple has not yet integrated rapid charging technology. This is one feature Apple has left on the table where devices like the Galaxy Note 5, LG G4, and even the low cost Moto X. I love being able to get a few more hours of use from a few minutes of charge or have the option to set my Note 5 down on a wireless charger without even looking for a cable.

The iPhone rear camera was bumped up from 8 megapixels to 12 megapixels, but I'm not seeing much difference here yet. That's OK since the iPhone 6 Plus camera was already one of the best around, but Android cameras from Samsung and LG have passed the iPhone in terms of overall capability. However, for the auto mode experience Apple still seems to beat the competition.

I already covered many of the unique features in iOS 9 and present on the iPhone 6s Plus, including 3D Touch (with Quick Action, Peek and Pop), Touch ID, Live Photos, and Hey Siri. I'm finding more ways to use 3D Touch within apps and love the efficiency.

While early on I didn't see the point of Live Photos, I now understand that the yellow indicator is activated before and after your capture so I am no longer capturing action as I put my iPhone down. My iPhone 6s Plus helped me capture some great moments of my youngest daughter's 16th birthday this weekend and Live Photos helped capture the context and fun around the photo that were taken. I hope we can eventually select a different moment before or after the current capture.

Thanks to the new embedded M9 motion coprocessor, activating Siri without having my iPhone 6s Plus plugged into a charger has been a joy over the past 10 days. I am constantly asking Siri what the latest sports scores are, using her to help create location-based reminders, find out what's next on my calendar, give me directions to locations, and much more.

The new Notes is a much more functional application that lets you easily include photos, sketches, web links, checklists, maps, and more. This was one application that hasn't been improved for years so its great to see some improvements.

Apple News has many more news sources than when I last tested the beta and I am enjoying browsing through the feeds created for me.

The iPhone 6s Plus is extremely responsive, Android still doesn't scroll as smoothly, all of the apps and services I want are there, and iOS 9 with WatchOS2 makes my Apple Watch more useful as well.

The Apple iPhone remains the most expensive smartphone line available today with 6s prices ranging from $649 to $849 and the 6s Plus ranging from $749 to $949. Thankfully, the resale value for the iPhone line remains very high so you should be able to go a year using one and only lose $200 to $300 in value.

Again, I can't recommend anyone purchase the 16GB model, especially after having older relatives buy the 16GB model and then need me to help clear the devices so they could continue using them to take photos. With today's use of the iPhone as the primary camera and advanced capabilities, 16GB is just not acceptable for anyone.

You can purchase the iPhone 6s/6s Plus outright like I did, via carrier financing options (T-Mobile even has an option that discounts the iPhone), or through Apple's new iPhone Upgrade Program. While Apple is actively promoting the iPhone Upgrade Program, look a bit closer at the real costs and understand you are required to buy the AppleCare+ protection plan that will end up costing you more to replace a broken display than it would if you did not have coverage and just took it to Apple to replace your display. I imagine Apple will make huge profits from this program, which is the point of the offering it in the first place. Did you really think Apple launched the program for your benefit?

The competition for the new iPhone 6s/6s Plus includes the Samsung Galaxy S6 line, the LG G4, and the Sony Xperia Z5. HTC may soon launch a viable competitor if they improve the camera performance.

The Apple iPhone 6s Plus is a significant upgrade from the 6 Plus, but the competition also continues to push forward. The iPhone 6s Plus camera may not be the best complete camera available today, but it continues to shine in auto mode, which is what most people care about and use. The Samsung Galaxy Note 5/S6 line and the LG G4 has more functionality, including RAW support and manual mode. Check out my latest Flickr album with shots from the Galaxy Note 5, iPhone 6s Plus, and ZUK Z1.

The iPhone 6s Plus is the best iPhone you can buy today and iOS users won't be disappointed. It's a bit large compared to competing devices with the same, or larger, displays, but the 6s Plus does support landscape orientation so it can also serve as a miniature tablet. There is a vast number of apps and services, with some still launching on iOS before Android.

I've been able to go through full long days with my iPhone 6s Plus over each of the past ten days, but would still greatly appreciate rapid charging in a future iPhone. With my three daughters using iMessage and FaceTime, the iPhone 6s Plus may once again be my daily driver for the next few months. Enjoying the heck out of my Apple Watch, while the Android Wear experience on iOS is too limited, means an iPhone is likely to stick around for the long term.

The iPhone 6s Plus has some amazing improvements, but it's tough to recommend people pay $650+ to upgrade if they already have an iPhone 6. If you can sell your existing phone and only lose out on a couple hundred, then I think you will enjoy all of the new technology and improvements in the new iPhone 6s Plus.

If not, then you can look at your friend's iPhone 6s Plus and know that the iPhone 7 will likely have all of that technology in more in a year.