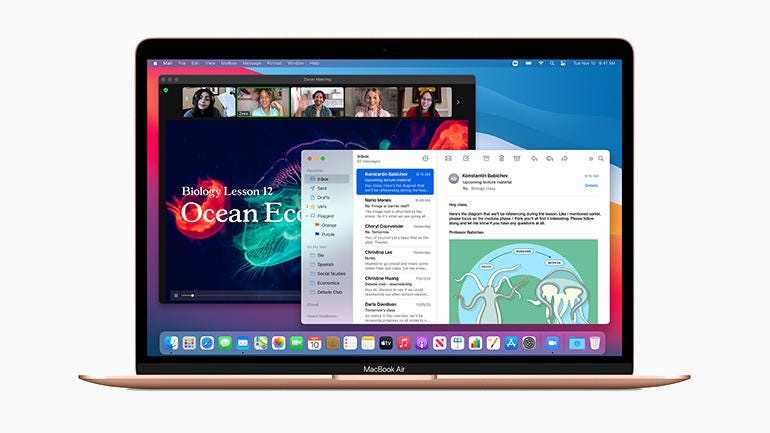 Apple's MacBook Air has always been my preferred technological travelling companion (back in the days when we actually travelled) thanks to its lightweight design and solid battery life. The MacBook Air was first launched in 2008, but Apple clearly recognised that it was onto a good thing, sticking with the same basic design and distinctive profile for more than a decade. But with the launch of this 2020 update and the introduction of Apple's Arm-based M1 SoC, the MacBook Air takes a leap into new territory.

The MacBook Air remains Apple's entry-level laptop -- although, of course, a starting price of £999/$999 would be at least mid-range for most PC manufacturers. But Apple's aim with this model is to redefine 'entry-level' performance, and on that score it has succeeded remarkably well.

Some commentators have expressed disappointment that the new generation of Apple Silicon Macs -- the MacBook Air, 13-inch MacBook Pro and Mac Mini -- are virtually identical to their Intel-based predecessors. It's certainly true that the outward appearance of the MacBook Air hasn't really changed at all. The 13.3-inch display remains the same, with 2560-by-1600 resolution (227dpi), although it does now support the DCI-P3 colour standard used for professional video editing. The laptop's overall dimensions remain unchanged, measuring 304mm wide, 212.5mm deep and 16mm thick, although it does seem to have crept up in weight slightly, from 1.25kg to 1.29kg.

It's still limited to just two Thunderbolt ports (which now support USB4) and we were disappointed to see that the FaceTime camera is still stuck at 720p resolution. However, the M1 chip's image-signal processor (ISP) does produce a noticeably sharper image than before, which is good news if you need a decent webcam for video calls.

We suspect that Apple is sticking with this tried-and-trusted design for good reason. The transition to Apple Silicon raises many immediate questions about software compatibility, as well as long-term questions about the future of the entire Mac platform. Apple is clearly concerned about keeping Mac users on board during this transition period, so these familiar designs are a way of telling users that it's 'business as usual' with the Mac.

On the inside, however, the 2020 MacBook Air is an entirely different beast.

The key change, of course, is the introduction of the M1, a highly integrated SoC (System on Chip) that combines CPU, GPU and RAM ('unified memory', available to all system components) on a single piece of silicon. Apple doesn't quote a processor speed for the M1, but the system breakdown provided by the Geekbench 5 test suite indicates that it runs at 3.2GHz. However, the MacBook Air offers two slightly different versions of the M1 chip.

Prices start at £999 (inc. VAT; £832.50 ex. VAT) or $999 for the eight-core M1 chip, with 8GB of RAM. It's a little disappointing to note that the entry-level model only uses seven of the eight cores that are available for the integrated GPU. That seems like a somewhat cynical decision, designed to encourage customers to opt for the second configuration, which uses all eight cores for the GPU. That configuration, which also doubles the solid-state storage to 512GB, costs £1,249 (inc. VAT; £1,040.83 ex. VAT), or $1,249.

The integrated design of the M1 processor doesn't leave much room for Apple's traditional selection of upgrade options. The only options available here are to upgrade to a maximum of 16GB of RAM -- which, as always with Apple, costs an expensive £200/$200.

But, even with a 7-core GPU, our review unit still delivered impressive performance. Running the new, M1-native version of Geekbench 5 produced single-core and multi-core scores of 1,730 and 7,590 respectively for CPU performance. As you might expect, those scores are very similar to those for the M1-based 13-inch MacBook Pro. To provide some context, the Geekbench 5 scores for the Intel Core i7-based MacBook Air launched earlier this year were 1133 (single core) and 3050 (multi core).

It's interesting to note that Geekbench 5 is a Universal app, which can run in either Intel or M1 modes, and a handy menu option within the app also allowed us to test the MacBook Air's performance when running Intel code via the Rosetta 2 translation technology that is now built into macOS Big Sur. This is important, of course, since the new M1-based Macs will need to rely on Rosetta 2 to provide compatibility with existing software written for Intel processors. With Geekbench 5 running in Intel mode the M1 MacBook Air still achieved scores higher than the Core i7-based MacBook Air, at 1,300 (single core) and 5,780 (multi core).

Even more impressive was the performance of the 7-core integrated GPU. The Cinebench R15 benchmark is Intel-only, but even here the MacBook Air was able to use Rosetta 2 to glide along at a smooth 85 frames per second (fps). That, coincidentally enough, is the same frame rate delivered by my office iMac, which is equipped with a discrete AMD Radeon R9 M290X graphics card.

An even sterner test was to run the Intel-native version of Rise Of The Tomb Raider. With the game running at the laptop's maximum 2560-by-1600 resolution and using its Very High graphics settings, the MacBook Air achieved a score of 21fps, while dropping to High graphics produced a playable 25fps -- no mean feat for an Intel-native game.

The only glitch we encountered during testing was that the Intel-native Unigine Valley benchmark didn't run properly using Rosetta 2. All my other Intel-based apps ran well, pausing only for a few seconds on launch for the Rosetta 2 translation process, and companies such as Microsoft and Adobe have confirmed that their current software works with Rosetta 2, with 'universal' versions planned for release in coming months.

The M1 MacBook Air is a fanless design, but even when running the demanding Tomb Raider benchmark at full tilt, it only became lukewarm.

Benchmarks aside, the MacBook Air felt much smoother and more responsive than previous models, and there's something strangely satisfying about the instant wake-from-sleep as soon as you open up the laptop.

The new MacBook Air has one final trick up its sleeve. Previous models already boasted an impressive 11 hours of battery life when streaming video from the web. However, the M1-based version ate 11 hours for breakfast: in fact, turning the screen brightness down to 50% and leaving it streaming video from the BBC iPlayer overnight, it cruised through breakfast and lasted until lunchtime, for a full 17 hours and 19 minutes.

My biggest Apple M1 question: What's Intel been doing all these years?

Apple Silicon M1 is everything Apple promised -- so what's next?