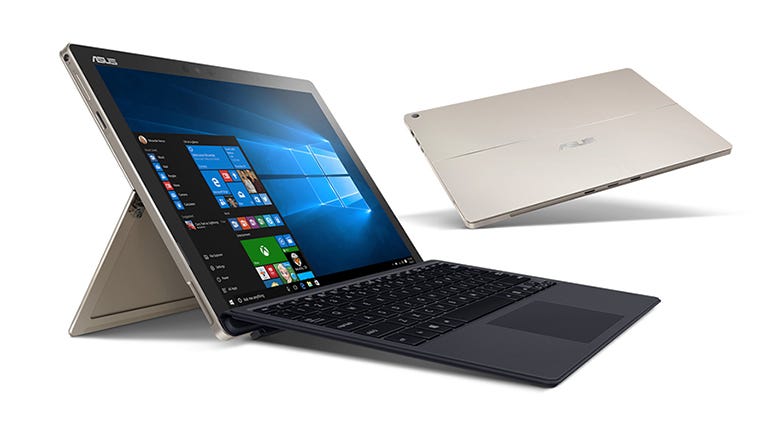 ASUS has decided it needs a high-end 2-in-1 ultraportable to rival Microsoft's Surface Pro 4, and the 12.6-inch Transformer 3 Pro is the result. A robust kickstand, a bundled keyboard, top-end components and high-quality design, along with a competitive price, all bode well. What could possibly go wrong?

The Transformer 3 Pro's build quality is very impressive. The chassis is made of the magnesium alloy that's characteristic of higher-end laptops, and I found it pretty much impossible to bend or bow the tablet in my hands. As well as being strong, the magnesium alloy is light, with the tablet weighing around 800g. This is still a lot to hold in one hand for any length of time, but held in two hands in landscape mode, or in portrait mode in the crook of an arm, it feels extremely manageable.

At 8.35mm thick the Transformer 3 Pro is ever so slightly thinner than the 8.45mm Surface Pro 4 (these things matter to marketing departments, if not real users).

ASUS's device does have a slightly larger footprint that the Surface Pro 4, measuring 298.8mm by 210.1mm compared to the Surface's 292.10mm by 201.42mm. The trade-off here is a larger screen. ASUS has opted for a 12.6-inch screen while Microsoft uses a 12.3-inch panel. Still, these differences are minor, and should not, on their own, create a preference for one or other device.

On the back of the tablet section the matte silver/grey finish of my review sample should not raise any eyebrows in the office. The ASUS logo stands proud in reflective silver, as does a thin strip that bisects the chassis horizontally. As well as breaking up a sea of light grey, this strip also marks the location of the kickstand's hinge.

The kickstand is the defining feature of the Transformer 3 Pro. Small grooves on the left and right edges provide purchase to release the kickstand and swivel it to the required position. Once in place the stand is rigid, and it can be set anywhere on a 155-degree rotation, which means the screen can sit anywhere between nearly upright and nearly flat on a table.

The screen is bright, sharp and clear. Its resolution of 2,880 by 1,920 pixels delivers particularly crisp detail while watching video. I found browsing and document creation to be perfectly acceptable too, although the screen's reflective surface can create issues in bright lighting conditions. Compared to the Surface Pro 4's 2,736 by 1,824 resolution, the Transformer 3 Pro offers slightly more pixels in a slightly larger screen, which makes for very similar pixel density -- 267ppi for the Surface Pro 4 versus 274ppi for the Transformer 3 Pro.

The chink in the armour of this device as far as output is concerned is sound quality. At its website ASUS says that the Transformer 3 Pro delivers an 'amazing audio experience'. A pair of front-facing speakers can certainly put out plenty of volume, but it's noticeably distorted at higher levels. Stick to about two-thirds of the way up the volume bar and things are better, but still not distortion-free.

A key feature of the Transformer 3 Pro is its input combo of keyboard and stylus. The ASUS Pen is a neat device incorporating WACOM technology to support 1,024 pressure levels and a couple of user-assignable buttons. There's a pen clip for parking the stylus is a top pocket, but there's nowhere on the Transformer 3 Pro itself to stow it, so, as is often the case, this is an easy item to mislay.

The keyboard comes in several colours: I was sent a dark grey version, but it's also available in two further grey shades and bronze. The keyboard build is robust and I couldn't flex it in my hands. Its rubberised coating both on the key side and the underside is a neat visual counterpoint to the tablet and helps with grip. The two sections slot together quickly and neatly, and I found the magnetic binding strong enough to survive the rough-and-tumble of travel in my rucksack.

ASUS doesn't divulge the weight of the Transformer Cover Keyboard, simply noting that the tablet weighs 800g. My kitchen scales reported 796g for the tablet and 344g for the keyboard, or 1.138kg in total. There are laptops that rival this weight: the non-touch version of the Dell XPS 13 (2016) weighs 1.2kg, for example, while the 360-degree-rotating Lenovo Yoga 900S is just 999g.

I found typing a comfortable experience: there's enough travel and feedback in the keys for me to get close to my regular touch-typing speed, and the backlight came in handy. The touchpad was responsive too.

As with the Surface Pro 4, there are two typing positions: the keyboard can either lie flat on a surface or be raised about 15mm from the surface at its back edge. The latter position was more comfortable for me, although typing generated a small amount of downward movement in the keyboard as I used it, delivering a hollow sound on every key press. I'm a light-fingered typist, so this effect may be more pronounced for others.

There are two variants of the Transformer 3 Pro. I was sent the less expensive of the pair. Both bundle the keyboard and ASUS Pen. The main differences between the two are:

There's no NFC in either model. Both have a 2-megapixel front camera and a 13-megapixel rear camera.

Physical connectivity is very important for mobile workers, and there's a fair bit here. ASUS has included a USB-C port with Thunderbolt 3 support (something that's not available on the Surface Pro 4), along with full-size USB 3.0 and HDMI connectors and a MicroSD slot. If you want to boost the integrated Intel graphics (for gaming, for example), you can add the ASUS ROG XG Station 2 via a Thunderbolt 3 connection.

The real problem with the ASUS Transformer 3 Pro is the longevity from the 39Wh lithium-polymer battery.

I found it necessary to set the screen backlight between 75 percent and 100 percent to work effectively -- any lower and reflectiveness became a real problem. This had an adverse effect on battery life.

During testing, I averaged about 4.5 hours of battery life without running particularly demanding workloads -- writing, web browsing, a little media streaming and some basic spreadsheet work.

Even when idling the battery depleted remarkably quickly. For example, on one occasion I left the Transformer 3 Pro switched on and connected to the internet with the screen set to 70 percent brightness for 70 minutes: during this unattended period the battery-level indicator reduced from 61 percent to 42 percent.

On the plus side, the battery will fast-charge, reaching 60 percent in 60 minutes,; the power adapter is also relatively small and light, so it shouldn't take up too much bag space.

ASUS has done a good job with the chassis design of its Transformer 3 Pro, and the keyboard has a lot going for it too. It's nice to see the two bundled rather than having to buy the keyboard separately, and to have the ASUS Pen thrown into the mix too. Full-size HDMI and USB 3.0 ports, and USB-C/Thunderbolt 3 are also all welcome. Audio quality leaves a bit to be desired, but the real elephant in the room is poor battery life: an inability to last beyond five hours with limited workloads may be a deal breaker for many potential buyers.