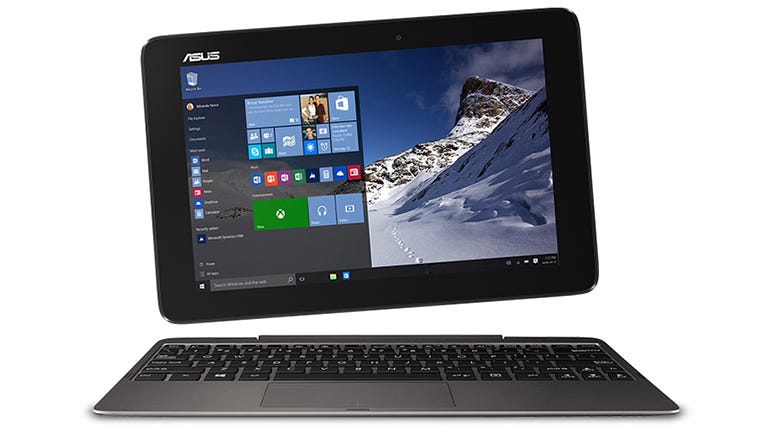 Two years ago the 10.1-inch Transformer Book T100 was ASUS's first outing with a small-format 2-in-1 Windows notebook -- that is, a laptop with a screen that detaches to function as a tablet. The new Transformer Book T100HA updates the internal components and adds Windows 10 (Home), but it's not the rarity that the original T100 was: Windows 2-in-1s are now commonplace.

The docking system is simple and very efficient. There are no catches to release -- you just pull the two sections apart when you want to separate them, and push them together as required. Despite this simplicity, the T100HA's dock is sturdy: even if you pick the laptop up by the screen, the two sections stay docked.

Battery life is clearly important for a highly portable 10.1-inch device weighing just over a kilogram (1.04kg, or 2.29lb). According to ASUS, you can squeeze up to 12 hours out of the T100HA's 30 Whr battery -- that's an hour longer than its 2014 predecessor. Of course, what you get in practice will depend on your usage pattern: during testing, we found that a regime of document creation/editing, web browsing, email and some music playback left a couple of hours remaining on the battery indicator at the end of the working day.

There's only one battery, which resides in the 580g screen/tablet section along with most of the remaining components. The keyboard base weighs 460g, making the system somewhat screen-heavy: tapping vigorously at the screen is likely to make the system topple backwards.

You'll need the keyboard attached if you need access to a traditional full-size USB (2.0) port. By way of compensation, the tablet section has both USB-C and a Micro-USB ports. Also on the tablet is a Micro-HDMI connector, a headset jack and a MicroSD card reader.

The keyboard is necessarily cramped, making it uncomfortable to type on for extended periods. And if you're a heavy-handed typist, you'll notice significant flex in the keyboard.

The 10.1-inch screen is a pleasure to use, even though its 1,280-by-800 resolution (149 pixels per inch) is nothing special. Images seem vibrant and text sharp and readable. Viewing angles are good too, although the reflective screen might prove challenging in bright lighting conditions.

If you deliver presentations to small groups when you're on the road, and you're OK with the T100HA's screen size, you may balk at its poor-quality audio subsystem. Sound quality is very tinny indeed, and there's a lot of distortion at the top volume level. The internal speakers are best avoided.

The processor is Intel's 'Cherry Trail' Atom x5-Z8500, supported by 2GB of RAM. I didn't notice any performance issues while using the Transformer Book T100HA for mainstream productivity tasks.

Our review unit had 64GB of internal eMMC storage. That's the standard configuration, which costs just £299.99 (inc. VAT). Currys/PC World has a even more affordable 32GB version for £249.99. If you're considering this model, note that 20GB of storage was consumed out of the box on our review sample.

We appreciate the Transformer Book T100HA's industrial design, and it's nice to see a USB-C port on the tablet section. The downsides include significant flex in the keyboard, limited internal storage and a relatively low-resolution screen.