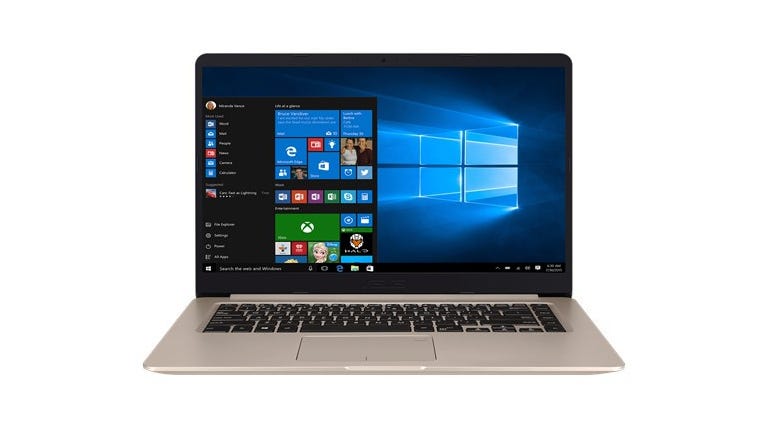 When a 15.6-inch laptop with a 7th-generation Core i7 processor becomes available for well under £1,000, it catches the eye. When that laptop boasts a narrow screen bezel and brushed metal finish, it gets a second glance. However, it's unlikely that a laptop with these credentials can deliver across the board for £899 (inc. VAT), so where has Asus made its compromises with the VivoBook S15 S510UQ?

According to Asus, the VivoBook S15 has the weight and compactness of an ultrabook. That's a bit of a stretch: at 1.5kg it's not the lightest of lightweights, and the 15.6-inch screen also makes for a rather large chassis, at 361mm wide by 245mm by deep by 17.9mm thick.

To be fair, the screen is packed into a relatively small chassis thanks to its narrow left and right bezels. Asus calls its minimal-bezel approach 'NanoEdge'. At 7.8mm, the bezels are a fair bit wider than the 5.7mm found on Dell's InfinityEdge XPS 15 9560, for example -- although this is probably not the fairest comparison, as Dell's XPS 15 is in a different price/performance league.

One area where these two laptops differ in Asus's favour is the positioning of the webcam. Asus has decided to keep the top bezel relatively thick, at around 14mm, which allows the webcam to sit in its traditional position above the screen. Dell, by contrast, has given the XPS 15 a narrow top bezel to complement the sides, which forces the camera to be on the bottom edge. This makes video calling a little awkward. Unfortunately Asus lets the webcam side down by limiting it to VGA resolution.

The screen has a matte finish and delivers reasonable but not perfect viewing angles. It doesn't support touch input, but the full HD resolution (1,920 x 1,080 pixels) is perfectly acceptable for web browsing, writing and video streaming.

Having noted that the display is 'acceptable', this sums up the build quality too. The brushed metal finish looks quite attractive, with particularly eye-catching vertical striping on the lid section. But it's als susceptible to scratching, as are the base and keyboard surround.

There's a reasonable amount of flex in the lid, and on the whole this is a laptop I would want to tote inside a sleeve and generally treat with some care.

The keyboard comprises well-spaced keys and a large, double-height Enter key. There are media playback controls on the cursor keys. There are three levels of keyboard backlight, controlled by two Fn keys -- one to raise and one to lower the brightness.

The keys themselves feel a little spongy. Their 1.4mm travel is fine, but the keys don't offer much resistance when pressed, nor do they spring back with much verve, so the typing experience is a bit flat. I'm not a fan of this low-resistance approach, but that said I didn't have any difficulty touch typing at my normal speed.

More concerning is the degree of flex in the keyboard. This is not uniform across the whole area, but there's barely a spot where there's no flex at all and at times it is very pronounced. It affected me even as a relatively light-touch typist.

The touchpad is responsive, with clicky and usable buttons. The Asus website lists a fingerprint sensor built into the touchpad, but also notes that specifications may vary by region. There was no fingerprint reader in my VivoBook S15 S510UQ review unit.

The CPU is an Intel Core i7-7500U supported by 8GB of RAM. There's also a discrete Nvidia GeForce 940MX GPU with 2GB of GDDR5 VRAM. This platform should allow the VivoBook S15 S510UQ to support compute-intensive workloads like video editing and gaming.

The OS is Windows 10 Home, installed on a 256GB SSD. Windows and various Asus tweaks consume a chunk of the SSD's storage, of course, and the system reported 196GB free.

Connectivity options are fine, if hardly cutting edge. There are two USB 2 ports, a USB 3 port and a USB-C port (USB 3.1 Gen1, so no Thunderbolt 3). There's also a full size HDMI port, a 3.5mm microphone jack, an SD card slot and a round-pin power connector.

Sound quality from the built-in speakers is reasonably good. Volume could go a bit higher, and bass tones could be better, but what's delivered should be adequate for video calls, work presentations and catch-up TV.

Asus provides a fast-charge AC adapter which it says will deliver 60 percent charge in 49 minutes. That's probably a good thing, as the 42Wh battery might struggle to keep power users going for a full day. For example during one three-hour period of use involving writing, web browsing and about an hour's streaming, the battery dropped from 100 percent to 62 percent. The screen was set to 50 percent brightness throughout.

Asus has equipped the VivoBook S15 S510UQ with a respectable platform in the shape of an 8GB Core i7 CPU and a discrete 2GB Nvidia GPU. However, the build quality could be more robust, there's notable keyboard flex, 256GB of storage might not be enough and the VGA webcam is disappointing. The biggest drawback is battery life, which may not support all-day working for demanding users.