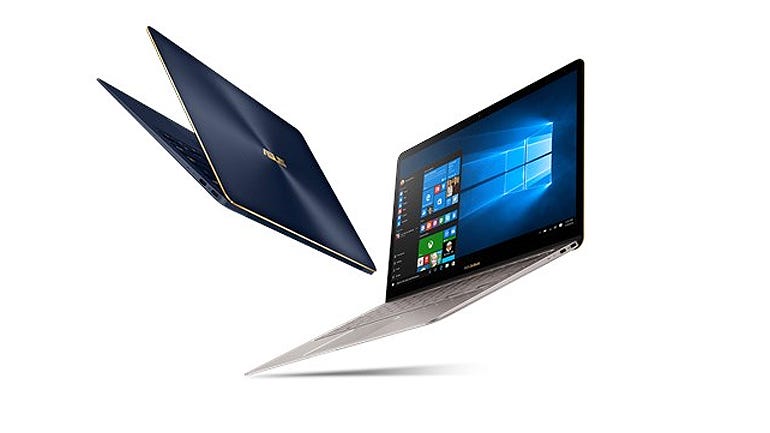 The Asus ZenBook 3 Deluxe is a solidly built 14-inch laptop that brings a splash of colour to the proceedings, with a blue-and-gold livery option as well as a more standard grey-and-gold version. Weighing just over 1kg, it might tempt mobile workers who were attracted by the 12.5-inch ZenBook 3 but require more workspace and a wider array of ports.

As you'd expect from the naming, the ZenBook 3 Deluxe and ZenBook 3 are clearly from the same design stable: my review sample of the 14-inch model was the same Royal Blue colour as the ZenBook 3 I reviewed at the start of the year, sharing the gold trim running around the lid and the italic gold lettering on the keys. The blue and gold combination remains just as striking on the larger laptop.

The chassis uses the same aerospace-grade aluminium, which Asus says is 50 percent stronger than standard alloy. Although there's a little give in the wrist rest, it generally feels very robust. Importantly, the lid section is very solid: I was able to bow the lid in my hands, but only very slightly. If you don't mind risking scratches on the lid's distinctive spun-metal finish, you could get away without using a protective sleeve when travelling. That said, Asus does provide a sleeve with the ZenBook 3 Deluxe.

All this strength is welcome in a laptop that weighs just 1.1kg. Thankfully, the strong build materials do not impinge on the overall size of the Asus ZenBook 3 Deluxe, which is just 12.9mm thick.

The desktop footprint of 329mm wide by 210mm deep is evidence of a fairly small bezel for the 14-inch screen. It isn't as narrow as the Infinity Edge bezel on the Dell XPS 13 and XPS 13 2-in-1; nor can it match the bezel on the Lenovo Yoga 910, but it's still notably thin. The screen, along with the premium hardware design, almost cries out for the screen to be touch responsive. But it isn't. That's a pity considering the overall price of this laptop, and it might just be a deal-breaker for some potential buyers.

The full HD screen resolution (1,920x1,080 pixels, 157.3ppi) might also disappoint some people, as it's low compared the Dell and Lenovo laptops mentioned above. Having said that, it's comfortable to work with, and there's enough real estate to have two application windows open side by side.

If you need to deliver presentations from your laptop or work outdoors, you might be disappointed by the relatively low maximum screen brightness. Horizontal viewing angles, at 178 degrees, are fine though, and the screen is well protected by Gorilla Glass 5.

On the audio front, Asus boasts at its website about a quad speaker system that's "designed to deliver true surround-sound that envelops you with cinema-quality audio". Asus also claims zero distortion at maximum volume.

Just as with the quad speaker system on the ZenBook 3, the Asus AudioWizard software provides presents for various sound scenarios. These do deliver different audio qualities -- but to my ear, not to the degree that Asus claims. The good news is that top volume is very loud, with minimal distortion even at top volume. But overall, I would rate sound quality as 'good' rather than 'great'.

The keyboard is backlit, with manual settings on two of the Fn keys to control light intensity. There is 1.2mm of key travel, making for a comfortable typing experience. There is a slight amount of flex in the keyboard, but only the most heavy-handed typists are likely to notice it, and it's nowhere near the issue I found it to be with the ZenBook 3.

Unfortunately, Asus has again put the power button at the top right of the key array, next to the Delete key, and I found it way too easy to hit the power button by accident. The Fn keys are also a little small in comparison to the main keys. This isn't a huge issue, but you'll need to be precise when hitting them.

The large, glass-covered touchpad is responsive, with a solid click action. It has a fingerprint sensor embedded in the top right corner.

A key problem I found with the ZenBook 3 was its lack of connections: Asus pared things down to just a single USB-C port and a 3.5mm audio jack. Thankfully, the larger ZenBook 3 Deluxe is better equipped: alongside an audio jack there are two USB-C/Thunderbolt 3 ports and a basic USB-C port with charge and data transfer. Asus also includes a USB-C to HDMI and USB-C to USB 3.0 converter. It is a pity there's no SD card reader, though.

According to Asus, the ZenBook 3 Deluxe UX490UA will last for up to nine hours on a full charge from its 46Wh 4-cell lithium-polymer battery, giving the prospect of all day working. Poor battery life was an issue with the ZenBook 3, but the Deluxe model performs better. During testing, a typical four-hour mainstream productivity session (document creation, web browsing and some media streaming, with the screen set to 40% brightness) depleted the battery from full to around 60 percent.

Moreover, when charging is required, the Asus AC adapter supports fast-charge, so that if the battery is particularly low up to 60 percent of capacity can be reached in 49 minutes.

Asus has packed a 14-inch screen into a compact, solidly built yet lightweight chassis, although the screen's moderate resolution and lack of touch support will be an issue for some. The claims made for the quad speaker setup seem overblown, though, and Asus should reconsider the positioning of the power button and absence of an SD card reader. Some buyers (and their IT managers) might also hanker for Windows 10 Pro rather than Home.