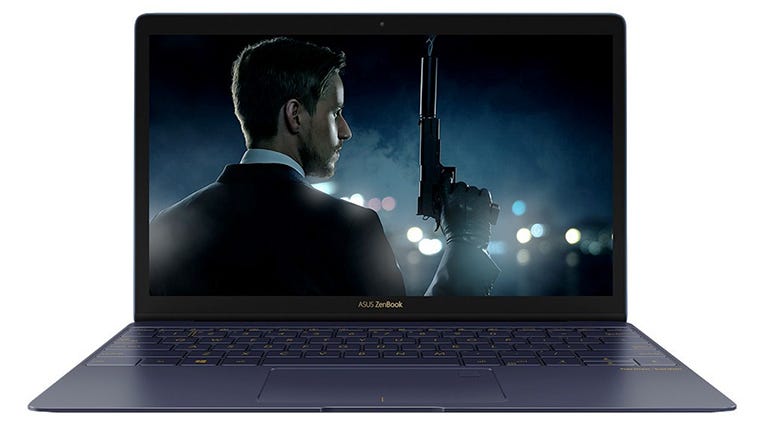 The ZenBook 3's chassis design is every inch what's expected of a premium laptop. My review sample's rose-gold colouring won't be to every taste, but there are royal blue and quartz grey alternatives for those requiring a more demure look.

In each case the ASUS branding is a bright gold beacon in the centre of the circular pattern on the brushed-aluminium lid. There's a band of gold trim all around the lid too.

ASUS says the ZenBook 3's aerospace-grade aluminium chassis is 50 percent stronger than standard laptop alloy. That's borne out by the fact that I was unable to bow the lid in my hands without exerting a serious amount of force.

The choice of material also means this is a lightweight laptop. Indeed, ASUS has managed to do what very few can achieve and duck under 1kg. In fact, the ZenBook 3 is well below that mark, coming in at just 910g (2lbs).

The ZenBook 3 certainly has the dimensions and build quality required of a high-end ultrabook.

Open up the laptop and the 12.5-inch screen is bright, with good colour rendering. But there are some disappointments: it's not touch-responsive, for example, which feels like something of an omission on a premium laptop. A bigger disappointment, though, is the resolution, which at 1,920 by 1,080 pixels is hardly pushing the envelope. Compare this, for example to the Dell XPS 13 and HP Elitebook 1030, both of which offer 3,200 by 1,800 resolution in touch and non-touch variants.

The keyboard is a similarly mixed bag of good and less good features. The key area stretches right to the sides of the chassis, giving room for big QWERTY keys that are easy to hit accurately. There's plenty of travel, but the keys don't feel very springy under the fingers, making the typing experience less comfortable than it could be. There's a lot of 'click' sound too.

Heavy-handed typists may not like the 'give' that's quite pronounced towards the centre of the keyboard. Another annoyance -- and this is something ASUS really should have spotted and fixed at the design stage -- is the ease with which you can accidentally turn the ZenBook 3 off thanks to the on/off button being to the right of the delete key and immediately above the backspace key. A slight mishit on either and the machine shuts down.

I'm a fan of touchpads with a tactile rather than a smooth finish, and so the ZenBook 3's glass-covered touchpad felt a little slippery under my fingers. Still, it functioned smoothly enough for cursor and gesture controls. I found clicking required quite firm pressure that took a little getting used to. The touchpad is wide enough to take the cursor right across the screen in a single sweep.

Nestled in the top right corner is a fingerprint sensor. It looks a little incongruous here, and effectively means a reasonably sized area of the touchpad isn't available for cursor control.

Our review unit was powered by Intel's 7th Generation (Kaby Lake) Core i7-7500U processor and 16GB of 2,133MHz DDR3 RAM. That's a powerful combination. Those looking to save money can dial down the specifications (and the price). For example, I found a Core i5 7200U/8GB version online for £1,099.

ASUS has designed a heat dissipation system specifically for the ZenBook 3. It includes some impressive materials such as a fan whose liquid crystal polymer blades are just 0.3mm thick, and 0.1mm-thick heat pipes. Heat emerges around the hinged area constantly, making this part of the laptop noticeably warm to the touch even when it's idling. It never became warm enough to cause concern, though. The fan itself kicks in from time to time making a little noise.

The 512GB SSD should provide enough storage for the mobile professional. Sound emerges from four speakers, two sitting above the number row and two on the underside. ASUS makes bold claims about sound quality, but I found that while there was plenty of volume on offer, audio quality was a bit tinny -- even after fiddling with the ASUS Audio Wizard that's designed to cater for scenarios like music, movie, gaming and speech.

Anyone wanting to attach a range of peripherals to the ZenBook 3 is in for an unpleasant surprise: all you get is a single USB-C connector and a 3.5mm audio jack.

If you want to attach more than one peripheral at a time, or to charge the battery while even a single peripheral is connected, you'll need to buy one of two optional docks.

The Mini Dock adds USB 3.0, HDMI and USB-C ports, while the Universal Dock provides these three ports plus VGA, RJ-45 Ethernet, 3.5mm audio in/out and an SD card reader. No details on pricing were available at the time of writing.

According to ASUS, the ZenBook 3 will deliver up to nine hours of life from the 6-cell, 40Wh battery that fills just about every bit of free space inside the chassis. However I'm not convinced that the average mobile professional will get much more than six hours' mains-free usage in practice.

For example, in one 4.5-hour stretch of moderately demanding work (document creation, web browsing and media streaming), the battery level dropped from 100 percent to 27 percent. It will be some comfort to those with even short-term access to mains power that the battery will charge to 60 percent capacity in just under 49 minutes.

The ASUS ZenBook 3 is a well built, very light ultraportable that looks fantastic. It is, though, very expensive, and that makes me critical of those features that don't come up to the mark. The somewhat unrewarding keyboard and touchpad are notable in this respect, along with the single USB-C port.

The biggest disappointment, though, is that ASUS's claimed all-day battery life is unlikely to be achievable by many mobile professionals. If you're in the market for an ultraportable, be sure to also consider Dell's XPS 13 and HP's EliteBook 1030 G1.