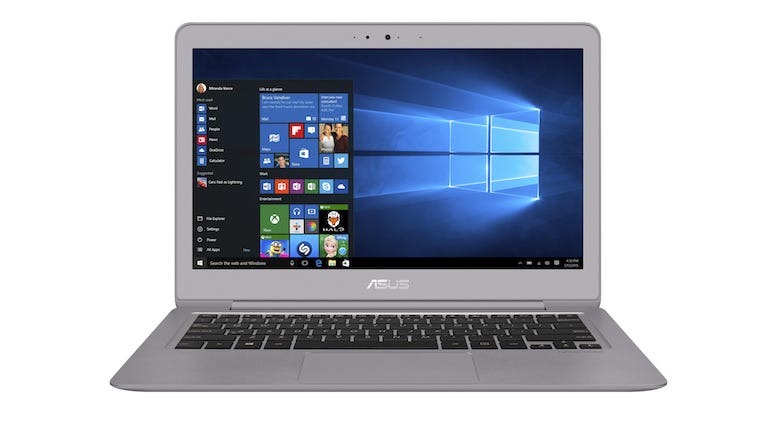 ASUS probably won't appreciate the inevitable comparison with Apple's MacBook Air, but the similarities between its new ZenBook UX330UA and Apple's veteran ultraportable are hard to avoid. In fact, they're really quite blatant. However, the ZenBook UX330UA offers better value for money, delivering features and performance beyond those of its ageing macOS-based rival.

With the ZenBook sitting on a desk alongside my own MacBook Air, it's only the darker tone of the ASUS laptop's aluminium casing that really sets the two systems apart (and even then, the ZenBook's rose-gold hue is taken directly from Jony Ive's colour swatch). They're virtually identical in size, with 13.3-inch screens and measuring just 17mm at the thickest point along the rear edge. The ZenBook also shares some very specific design details with the MacBook Air, including the chunky border around the screen -- which looks rather dated compared to today's edge-to-edge glass displays -- and even the curved panelling that runs around the edges of the keyboard. ASUS has at least shaved a little weight off, the ZenBook UX330UA coming in at 1.2kg, compared to the MacBook Air's 1.35kg. The Apple influence does at least mean that the ZenBook boasts excellent build quality, with a sturdy metal chassis providing good support for the screen panel, and a comfortable, responsive keyboard and trackpad.

That, thankfully, is where the ASUS/Apple similarities end. The metal border around the screen may look dated, but the ZenBook UX330UA is much more up to date in terms of both features and performance. The ZenBook's 3,200-by-1,800-pixel display (276ppi) dwarfs the MacBook Air's antediluvian 1,440-by-900 resolution (128ppi) and provides a bright, colourful image with excellent all-round viewing angles. It will work well for viewing web pages, streaming video or giving presentations and, like a number of recent tablets, the ZenBook allows you to reduce the blue light emitted by the screen in order to reduce eyestrain when working on it for long periods of time.

The screen isn't touch-sensitive, but few business users are likely to miss that option. Our only minor complaint here is that the stereo speakers aren't particularly loud, so a set of external speakers will probably be needed if you're going to give a presentation to more than a handful of people at a time. You've got plenty of connectivity options for speakers and other accessories though, as the ZenBook includes one of those 'legacy' 3.5mm audio sockets that Apple is trying to kill off, along with two USB 3.0 ports, USB-C, Micro-HDMI and a SD card slot. There's no RJ-45 Ethernet for connecting to a wired office network, but ASUS does include a USB-to-Ethernet adapter at no extra cost.

The ZenBook UX330UA also comes out ahead of the MacBook Air in terms of price and performance. Our review unit was priced at £999.99 (inc. VAT, or £833.33 ex. VAT), and includes a sixth-generation, dual-core Intel Core i7-6500U processor running at 2.5GHz (3.1GHz with Turbo Boost), along with 8GB of RAM and a 512GB solid-state drive. At that price, the MacBook Air offers only a fifth-generation Core i5 processor running at a modest 1.6GHz, and a 256GB SSD. You can also shave £100 off the ZenBook's price by opting for a Core i5 CPU, which at 2.3GHz is still faster than the MacBook Air, so there's little doubt about which laptop offers the best value for money.

And, of course, the Core i7 processor delivers excellent performance that's more than capable of handling Microsoft Office and other mainstream productivity apps. When running the Geekbench 3 test suite, the ZenBook achieved scores of 3323 (single core) and 6983 (multi-core, which put it well ahead of the MacBook Air's respective 2594 and 5574. (And, for Geekbench afficionados, the new Geekbench 4 reported single-core and multi-core scores of 3800 and 7200, along with 18050 for the new GPU tests.)

To maintain its streamlined design, the ZenBook UX330UA has to rely on the Core i7's integrated HD 520 GPU, which managed a speed of 38.3fps when running the Cinebench R15 OpenGL test. That's not quite in the mobile workstation class, but will be adequate if you need to do some simple photo- or video-editing for presentations work, or even for a spot of casual gaming in off-duty hours.

We were also pleased to see that the Core i7 processor ran cool and quiet at all times, even during the demanding graphics tests. In fact, the ZenBook UX330UA doesn't even include any air vents for the cooling system, and there aren't many laptops that manage to squeeze Core i7 performance into such a slim, lightweight design. Microsoft's Surface Pro 4 does provide an i7 option, but that starts at £1,299 (inc. VAT, or £1,082.50 ex. VAT) with no keyboard and just 256GB of storage, so the ZenBook manages to provide a good all-round combination of performance, portability and price.

Battery life is more modest, though. ASUS claims 'up to 12 hours of web browsing', but the ZenBook only managed 6.5 hours when streaming video from the BBC iPlayer in our tests. Even so, that's still not bad for a laptop that combines Core i7 performance with such a high-resolution display, and lighter web browsing should certainly allow you to get a full day's work out of the ZenBook. ASUS also plans to release a model with a conventional HD (1,920x1,080) display, which would be less power-hungry, although no price was available for that model at the time of this review.

At first glance, the ASUS ZenBook UX330UA looks little more than a MacBook Air clone. However, its Core i7 processor and high-definition display put it significantly ahead of Apple's ultraportable without any additional price premium. And while many ultrabooks sacrifice performance for portability, the ZenBook UX330UA manages to combine desktop levels of performance with an attractive, lightweight design that will appeal to business travellers who need a powerful mobile workhorse.