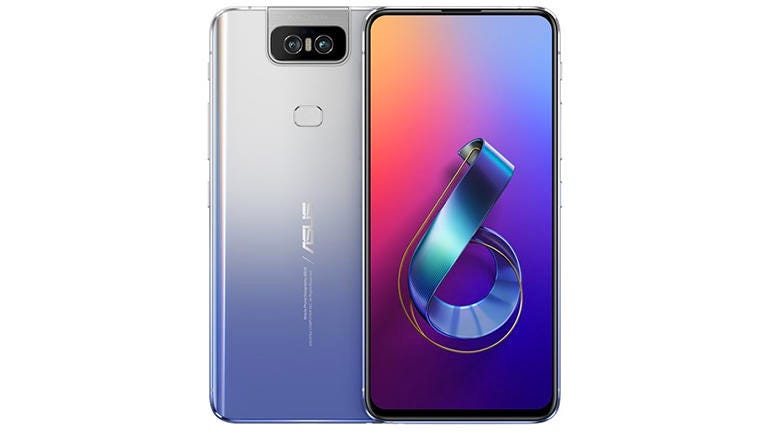 Asus isn't known as a leading smartphone manufacturer, but that might change with the ZenFone 6. There are small surprises like the neatly positioned alert and charge light and a configurable Smart Key. And there are bigger deals like the massive 5,000mAh battery and a clever camera setup that impresses even given the increasingly excellent competition. Asus may have hit the mid-range nail squarely on the head with the Zenfone 6, giving the darling of the mid-rangers OnePlus, whose OnePlus 7 becomes available in June, something to worry about.

The Asus ZenFone 6 is a relatively hefty (190g) minimal-bezel handset with a 6.4-inch screen that occupies 83.7 percent of the front (somewhat less than the claimed 92%, but still impressive). That leaves the problem of how to handle the front-facing camera. The Oppo Find X provides a motorised pop-up section, for example, as does the OnePlus 7 Pro, while the Honor View 20 sticks its camera in a 'hole-punch' cutout in one corner of the screen, where it's least obtrusive. This technique is used in the more recent Honor 20 Pro.

None of these manage what Asus has done with the ZenFone 6's Flip Camera. Asus has thought not just about removing the front camera, but also about enhancing the camera's usability. The result is not just another pop-up design. Open the camera app and the dual rear-facing lenses are used in the usual way. Switch to selfie mode and the camera housing swings out from the back of the handset until the two lenses sit proud of the top of the phone, facing forwards.

If you hold the selfie button a slider pops up that can be used to rotate the camera housing into a particular position -- perhaps using it as a stand, or to get a shot that's at an awkward angle.

Then there's motion tracking. Set this off and the camera will follow a moving subject, although it's not entirely successful. The subject needs to be fairly slow-moving and the camera doesn't swivel -- this is no 360-degree tracker. Still, it's a neat thing to enable. More successful is panorama mode: select it and hold the camera steady, and the flip lens moves through its full 180 degrees, shooting as it goes.

The flipped-up camera feels quite secure, and I think it would take some force to damage it. If it's left for a short while without being used the camera puts itself away. I did come across one issue: if you try to flip the camera up while the phone is face-up on a desk, the weight of the handset (understandably) prevents the flip action working. This makes me wonder whether the motor is robust enough for the long haul. Time will tell.

All this functionality is well and good, but what about image quality? The main camera has a 48-megapixel sensor with an f/1.79 lens, while the secondary camera comprises a 13MP sensor and an ultra-wide-angle lens with a 125-degree field of view. This is not the fancy setup of a triple or quad array, but the photos it took were very good. Panoramas were particularly pleasing because they don't rely on the user rotating the camera, just on holding it steady -- although they are limited to about 180 degrees.

I tested the automated panorama mechanism on some vertical shots, with interesting results. On a bright sunny day, photos taken at full zoom retained a great deal of detail, while indoor shots capture texture and detail well.

Night mode shooting captures quite a lot of detail, though I have not had an opportunity to test this at length in the short period I've had the phone so far. Expect an update after further testing.

The camera is the most significant innovation Asus has made with the design of the ZenFone 6, but there are a couple of others.

There is a tiny, discreet, notification LED in the top right corner just above the screen, and above the comms and battery status icons. It's a pleasure to see that some thought has been put into this LED's location (it's easily disabled if it irritates).

A more significant design tweak is the addition of a third key on the right side, above the blue-rimmed power key and the volume rocker. This smaller, textured key is called the Smart Key. By default it's set to call up the Google Assistant, but that's easily changed and you can configure it to have specific single-press, double-press and long-press actions.

As far as the rest of the build is concerned, the glass back is as slippery as you'd expect. My Midnight Black review sample was pretty good at attracting fingerprints too. There is also a Twilight Silver option. A bevel into the edges both front and back reflects light, making it look as though there's a silver rim all around the phone.

There is a 3.5mm headset slot on the bottom edge, and a single speaker grille. The audio subsystem delivers plenty of volume, but sound distorts when turned up to the max. The sweet spot is two-thirds of the way up, where there's no distortion, good bass tones and a reasonable volume level.

The 6.4-inch screen is clear and sharp. The 2,340-by-1,080-pixel resolution (403ppi) is nothing special, but it's perfectly acceptable -- and a moderate resolution does help the battery last longer. Still, I'd prefer OLED to the IPS LCD panel that Asus has used. Asus Splendid allows for some colour temperature tweaking, and there's a night mode, but I missed a 'reading mode' to push the screen into greyscale for ebook reading.

Asus has steered clear of in-screen fingerprint recognition, instead putting the smallest of physical sensors on the back of the handset. I found it fast to use and conveniently positioned for both left- and right-handed use.

The ZenFone 6 comes in two configurations. My review sample was the £499.99 model with 6GB of RAM and 128GB of internal storage, of which 18GB was used out of the box leaving 110GB free. There's also a £599.99 8GB/256GB model. If you need more storage, the handset supports two SIMs and a MicroSD card at the same time, so there's no need to sacrifice a second SIM to boost the internal storage.

The Snapdragon 855, supported by 6GB of RAM in my review sample, is Qualcomm's top-of-the-range chipset at the time of writing. When running Geekbench benchmarks the handset asked if I wanted to use 'AI Boost' mode to get the best experience and benchmarks. I declined, and it still delivered impressive scores: 11,335 for multi-core and 3,530 fro single-core operation. The Xiaomi Mi 9, with exactly the same chipset/RAM configuration scored 11,322 and 3,200 respectively.

Where the ZenFone 6 really stands out is battery life. Its 5000mAh battery makes this is a heavy phone at 190g, but that's a price worth paying for a Geekbench battery score of 7690 and rundown time of 12 hours 49 minutes. This year I have only seen the Motorola G7 Power go further, stretching its 5000mAh battery to 13 hours 10 minutes. In real-world usage, it should be possible for some users to get two days from a full charge. QuickCharge 4.0 (18W) is available, but there's no support for wireless charging.

The ZenFone 6 runs on Android 9 Pie with the latest Asus ZenUI 6 on top. This is seriously toned down from earlier versions, although it does include a range of tweaks. OptiFlex learns which apps you use and loads them faster than the norm. Dark Mode, essentially replaces the white background with a black one easing eye strain. Smart Volume sets media, ringtones and call volume to a level appropriate to ambient noise. There are plenty of other tweaks too, but they are less obtrusive than previous iterations of ZenUI. Asus also adds a range of its own apps including a gallery, file manager, weather app, data transfer tool, sound recorder and its own camera app.

Asus deserves to have a success with the ZenFone 6. Long battery life, a configurable Smart Key, useful tweaks to Android via a revamped and toned-down ZenUI, and a clever camera system combine to make this a very impressive mid-range smartphone.

11 things my Android phone does way better than your iPhone

Trump: Huawei block could be solved in China trade deal

Apple to be more upfront about the impact of iPhone updates