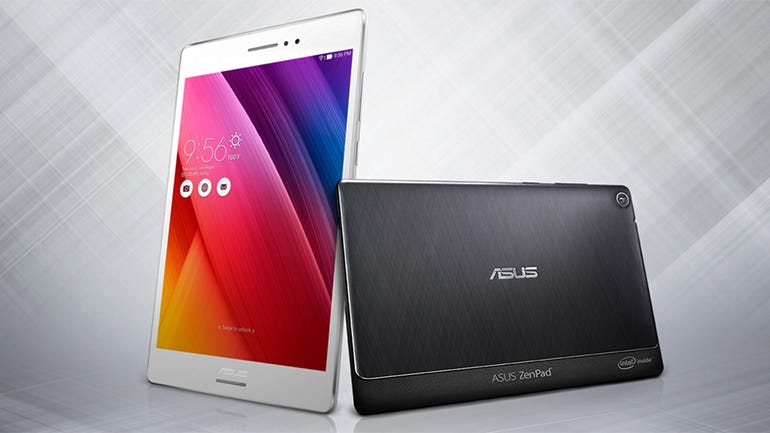 ASUS often manages to add a surprise or two to its product ranges, and the new ZenPad S 8.0 is no exception. Thin and light, this 8-inch Android tablet is styled as an iPad mini challenger. At £199.99 (inc. VAT; $199) with 2GB of RAM and 32GB of storage it's less expensive by some margin, and has the advantage of supporting pen-based input.

Right out of the box, this is an impressive piece of kit. The 8-inch screen sits in a chassis measuring 203.2mm by 134.5mm - giving, Asus proudly tells us, a 74 percent screen to body ratio. In practice this means there's about 5mm of screen bezel along the long edges, a rather more significant 20mm along the short edges, and that the tablet is a good size for holding in one hand.

More impressive is the fact that the ZenPad S 8.0 Z580CA is just 6.6mm thick and weighs 298g. Much of the backplate is made from brushed aluminium: it isn't as tough as the iPad mini 4 and there's a fair bit of plastic in the chassis, but an all-metal build would doubtless have boosted the price.

Switch on and the ZenPad S 8.0's 1,536-by-2,048-pixel (320ppi) screen looks great. ASUS always puts a lot of store on its tablet and smartphone screens, so as well as a resolution that makes video viewing easy on the eye, we've got ASUS Splendid, a familiar tool for users of ASUS's tablets and smartphones that lets you fiddle with the contrast and colour depth to help ensure what you see suits your preferences. Although it lacks the ability to save personal preferences, I find it very useful.

Asus also includes Tru2Life+, a set of tweaks to help improve contrast, sharpness and detail, delivering clearer and better-defined still and moving images. I certainly have no complaints on the quality of either stills or video.

One of the selling points of the ZenPad S 8.0 is that it can be used with the Z Stylus for pen-based input. Sadly, and despite specifically requesting it, ASUS was not able to provide one of these for testing, so I can only imagine what its 1024 levels of pressure sensitivity deliver in everyday use.

Android 5.0 (Lollipop) is augmented by a host of user interface features and apps that are part of ASUS's ZenUI. There are a fair few apps here you might not want to keep, but you can't remove them all. Trip Advisor, for example, can be deleted but you can't get rid of Kids Mode, which offers younger users a predefined subset of apps and whose setup is password protected. Nor can you delete Do It Later, ASUS's task manager.

The 64-bit quad-core Intel Atom Z3560 processor, which runs at up to 1.83GHz, keeps things ticking along impressively swiftly. Asus says the screen response time is 20ms and I certainly never felt I was waiting for anything to happen. There's 2GB of RAM and 32GB of internal storage. with 24GB free out of the box. A MicroSD card slot is available on the left edge if you need to augment the internal storage, along with 5GB of ASUS Webstorage (lifetime) and 100GB of Google Drive space (for two years). The front and rear cameras have resolutions of 5 megapixels and 8 megapixels respectively. Wireless connectivity is via 802.11ac wi-fi, with Miracast support, and Bluetooth 4.1.

Be aware that the new style USB Type-C connector is needed to charge the ZenPad S 8.0. Its symmetric design means you can't put it in upside down -- there is no upside down. That's a boon, as is faster charging - but, of course, it isn't compatible with whatever trusty 'one size fits all' charge connector you currently carry. The tablet's 15.2Wh lithium-polymer battery is rated as good for 8 hours.

On the basis of a brief first look, ASUS has made a good job of the ZenPad S 8.0 Z580CA, although fewer bundled apps that can't be removed would be preferable.