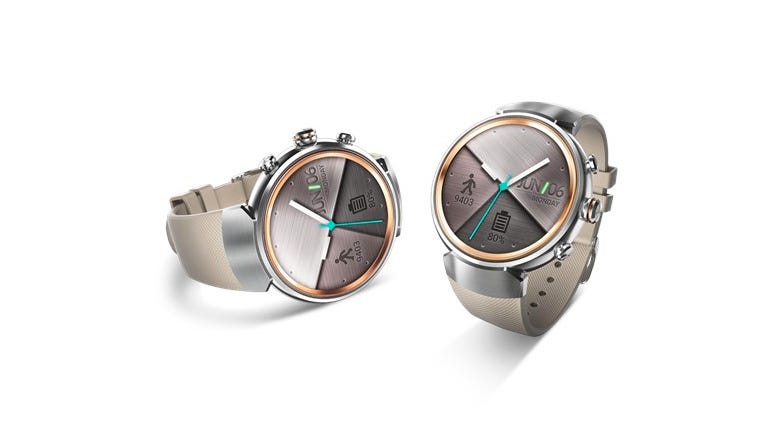 Asus is now a veteran of the smartwatch market, with 2015's ZenWatch 2 being judged a "highly capable, stylish and affordable Android Wear device". So how does the new ZenWatch 3 shape up?

The ZenWatch 3 has been a long time coming, as it was announced back in September 2016. Since then we've seen the arrival of Android Wear 2.0., which offers several advantages over the Android Wear 1.5 running on my review unit. Notable Android Wear 2.0 features are the ability to run native apps (no need for a phone to be in the vicinity), an embedded Play Store and even a built-in keyboard.

The good news is that Android Wear 2.0 will come to the ZenWatch 3. However, since the device doesn't include NFC, Android Pay won't be supported when it arrives. Other notable absentees from Asus's new smartwatch are GPS and a heart-rate monitor.

There are a few bundled apps on board. ZenFit counts steps -- in my experience quite accurately -- and can also be set to track running, push-ups and sit-ups. Also included are Asus Weather and a flashlight app.

You control the device via the ZenWatch Manager app, which reports the watch's battery and status, lets you select from and customise a wide range of faces (and even design your own), find apps and adjust various settings. Among the latter are an SOS call facility (if a fall is detected, for example) and getting the watch to vibrate continuously -- handy if you've mislaid it.

Like all Android smart watches I've tried, the ZenWatch 3 is a chunky device. It's large for my wrist, with a 45mm diameter face and 9.95mm thickness (yes, it's thicker than many phones). The solid top and bottom lugs onto which the strap fits stopped it from hugging my wrist.

Yet it's not uncomfortable to wear, and the thick strap with its double loops feel secure. The stainless steel bezel and backplate lend an air of quality to the overall look.

The three huge side buttons look out of place, but they're useful for navigating the watch's features. The outer pair can be customised to launch apps, and there are also some gesture controls. However, flicking the wrist up, down and around feel like a step too far for me.

The 400-by-400-pixel display is sharp and bright, and I didn't notice any performance issues during my (short) testing period. The Snapdragon Wear 2100 Mobile Processor with 512MB of RAM and 4GB of eMMC storage seemed up to the job.

Battery life varies depending on what the ZenWatch 3 is asked to do. When I kept the screen constantly on I got over 24 hours of life, but never managed as much as 48 hours. The 340mAh battery will fast-charge to 60 percent in 15 minutes, and the USB charge unit is a circular pad that clips onto the back of the watch securely via magnets. The middle button on the face can be used to set an Eco Mode, which disables networking and notifications, extending battery life.

The ZenWatch 3 is slightly hampered by the wait for Android Wear 2.0, but more so by the absence of NFC, GPS and a heart-rate monitor.