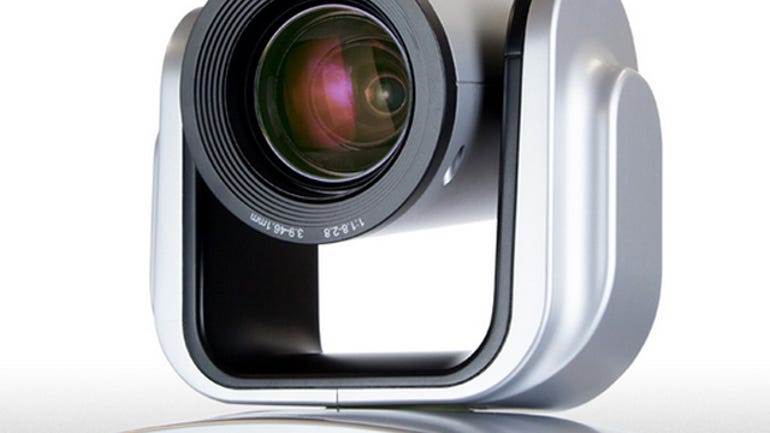 Large room video conferencing traditionally has been a tool that has been restricted to enterprises due to the need for compatible supporting infrastructure at each conference room endpoint, often necessitating single-vendor solutions which until recently, could run up into the many thousands of dollars.

In the past two years there have been a number of products released to the market to try to address SMBs in order to bring that enterprise-like video conferencing experience using open protocols, standards and off-the-shelf software such as Skype, Google Hangouts and WebEx.

However, for the most part, while effective for small "focus" rooms of two or three people, such as Logitech's excellent low-cost ConferenceCam BCC950 ($250 street) they really are not good for groups of six or more people in a larger conference room as they lack the optics, zoom capability as well as multi-directional speaker pickups and Polycom-style speakerphone setups that are expected for larger meetings.

At under $1000, AVer's new Plug-N-Play VC520 (that competes similarly with Logitech's CC3000e, which was released in 2014) solves many of the problems of the smaller systems and brings high-quality large room video conferencing to the table, while utilizing commodity PC hardware and popular cloud-based video conferencing services such as Skype, Skype for Business, Google Hangouts, WebEx and GoToMeeting, at a price SMBs as well as increasingly budget-conscious large enterprises can easily swallow.

Setup of the VC520 is relatively simple -- a small AC-powered USB hub unit is connected to your PC or Mac, which is in turn connected via specialized, color-coded Mini-DIN cables to the video camera unit and the speakerphone unit.

The device is recognized by the operating system as a regular webcam and microphone, so there is no driver configuration per-se. All configuration and video/audio tweaking is accomplished using the client video conferencing software, so the system is pretty much platform agnostic provided your PC hardware and OS supports regular webcam and standard USB audio devices.

We used a 2013-era Mac Mini with 8GB of RAM with OS X Yosemite, as well as a 2013 1st generation Lenovo ThinkPad Carbon X1 Touch with 8GB RAM utilizing various Windows 10 Enterprise Technical Preview builds. Both systems were connected via HDMI to a 42" SHARP television.

Conference software used on both OS platforms was Skype for Business 2015 and Lync 2011 for Mac using Office 365, as well as the consumer versions of Skype, over a residential 50Mbps/5Mbps Comcast broadband connection.

The device was set up in a 12' x 16' area which is slightly smaller than a typical conference room, on a table designed to accommodate up to 6 people.

We were extremely pleased with the sound pickup by the speakerphone from multiple seating positions and well as call control integration with Skype for Business 2015 for volume, mute, hangup and answer. While we did not have a secondary speakerphone sent to us with the unit, the system can accommodate a second one daisy chained for larger conference tables of 12 people or more.

Each speakerphone can also act as a bridge connection to a cell phone using a mini jack connector, which is convenient for ad-hoc meetings not requiring video or the use of VOIP.

We were somewhat disappointed that the unit lacked Bluetooth pairing like Logitech's CC3000e, but then again, the CC3000e doesn't support daisy chaining a second speakerphone console, and has one year less of warranty, two years, versus three on the AVer VC520, which also has a 72-hour replacement policy within the first warranty year.

High-definition video as well as audio fidelity as received by our test subjects was reported as extremely clear, and the 12 power adjustable optical zoom with pan and scan with 10 programmable position pre-sets came in handy when we changed seating positions, in order to simulate multiple subjects.

While it would have been nice for the camera to have some sort of auto-track capability, we recognize this is a feature that would probably require tighter API integration with the video conferencing software to add movement, audio and subject recognition as well as the ability to automatically manipulate the camera servos. It's also not something that we necessarily expect on a $1000 setup -- such features are normally found on systems ten times the price.