Why you can trust ZDNet
Our recommendations are based on many hours of testing, research, and comparison shopping. We may earn a commission when you purchase a product through our links. This helps support our work but does not influence what we write about or the price you pay. Our editors thoroughly review and fact check every article. Our process

The BlackBerry KEY2 progresses the design and feature ideas that were expressed two years ago in the KEYone. BlackBerry Mobile takes Android (8.1), adds in a sprinkle of its own software usability tools, and mixes these with a physical keyboard that has more to it than the ability to put characters on-screen. The result is a handset that's refreshingly distinctive in an era of identikit smartphones. The BlackBerry KEY2 starts at $649 in the US, £579 in the UK, €649 in Europe, and $829 in Canada.

The logo sits against a black, rubbery, textured backplate. This gets a mention early on in this review because it encapsulates the ethic of this phone: simple usability over excessive styling. So while Android is tweaked, and new apps and services are added to the base offering, everything has been done with usability front and centre.

Still, this handset is a bit of a monolith. The black and silver colour scheme looks rather retro here, with silver horizontal strips separating the keyboard rows. The keyboard itself occupies about a quarter of the device's height, and oddly, the phone looks tall. But a reality check shows that it's not out of kilter: the OnePlus 6, for example, measures 155.7mm by 75.4mm by 7.75mm and weighs 177g, while the BlackBerry KEY2 is shorter at 151.4mm, narrower at 71.8mm, thicker at 8.5mm and a shade lighter at 168g.

So the size thing is an optical illusion. What's not an optical illusion is that a physical keyboard means the screen is shorter than usual: it measures 4.5 inches across the diagonal and has a 3:2 aspect ratio -- not that much taller than it is wide. The IPS panel's resolution is 1,620 by 1,080 pixels (433ppi) and the image quality is very good.

That said, I've become so accustomed to using the popular 18:9 aspect ratio when reviewing handsets that the KEY2's relatively short screen felt cramped. I was often tempted to switch over to my regular phone for things like ebook reading, media viewing and even web browsing. Generally I stick with a phone for all uses when reviewing, and so resisted the temptation to stray -- but I still felt it.

The keyboard is crucial to the BlackBerry modus operandi. It's what made the BlackBerry name in the old days -- and also when, in conjunction with BlackBerry Messenger, it became the darling of young communicators. The KEY2 keyboard has had something of a makeover, and the experience is superb -- although, just as Jason Cipriani found with the KEYone, it took me a while to get back into the swing of using a physical keyboard.

A fingerprint scanner is built into the space bar, very close to the bottom of the shell. Although I prefer fingerprint readers on the back of handsets, the KEY2's was efficient and fast -- and somehow, because I knew I'd be working with the keyboard a lot, the location was less of an annoyance than it is on all-screen devices.

All of the keys double up as a sweepable surface area for scrolling, which makes paging through emails and web pages fast and easy. Up, down, left and right automatically orient as the screen is switched between portrait and landscape formats.

While tapping out an email or text message, suggested words can be entered with a quick flick upwards on the keyboard. I never quite mastered this well enough to take full advantage, but I can see how, in time, it could be a real speed boost.

Keys are 20 percent larger this time around, and while that might not sound like much on a keyboard that only measures 7cm across, it is significant. I found that the more I used the keyboard, the faster I typed on it. Little things like holding a key down a fraction longer than normal to get into upper case, really help with typing speed.

I also assigned some keyboard shortcuts. When on the home screen both long and short key presses can be set up to do a whole range of tasks, from launching an app to dialling a number or texting someone specific. With 26 long and 26 short presses, there should be enough shortcuts for everyone.

It's fair to say, though, that I never really felt as comfortable with one-handed use as I do with on-screen keyboards. In any case, one-handed use precludes getting secondary characters, which require simultaneous pressing of the Alt key, and also rules out using the new Speed Key, which sits on the far right of the bottom row of keys, and lets you take advantage of those long and short press keyboard shortcuts from within any app.

I mentioned at the outset that Android has been tweaked and that new apps and services have been added. And what a lot of extras there are.

There's far too much here to go into in detail, but a few highlights are worth a mention. BlackBerry Hub -- not a new idea -- brings together key information such as calendar, email, texts and other communications in a panel that slides out from the right of the screen with a quick sweep. DTEK tells you how secure your device is based on settings and app permissions. Privacy Shade is a weird little app that blacks out the whole screen apart from a small letterbox that can be dragged up and down revealing just a small area of the screen at any one time.

All of this is solidly business focused, but the dual camera setup has wider appeal. Yet even here, things are somewhat restrained. The rear cameras both have 12MP sensors, with f/1.8 (wide angle) and f/2.6 (telephoto) lenses. The main beneficiary is the near-ubiquitous bokeh (sharp subject, blurred background) capability, plus 2x optical zoom; 4K video recording is also supported. During the relatively short test period I found the new dual camera system perfectly capable, although low-light images were lacklustre.

The KEY2 is powered by a Qualcomm Snapdragon 660 chipset with 6GB of RAM. It's not the most powerful smartphone platform by any measure: an average of three Geekbench 4 multi-core benchmark runs delivered a score of 5833, which pales in comparison to the OnePlus 6's three-run average of 9043. Then again, gaming fans aren't going to be drawn to the relatively small screen, and I never felt the handset held me back with mainstream workloads.

My review unit had 64GB of internal storage, and with all that extra software on board in addition to Android Oreo 8.1 I was left with just 51.56GB for my own usage. Fortunately there's a MicroSD card slot next to the SIM.

Battery life is very good, and better than I expected from a 3,500mAh battery. The processor and screen size likely help keep consumption down, and I've been getting two days of use from a single charge -- which is quite remarkable in today's handset market. The phone charges quickly too: 50 percent in a rather precise 36 minutes is the claim. And when the screen is off there's a really useful charge indicator that runs along the right edge. Simple, but very effective.

The BlackBerry KEY2 offers an excellent keyboard, and BlackBerry fans will likely be happy to give up some screen space to accommodate it. The plentiful software won't appeal to everyone, but for those who appreciate extras such as the Hub, it works well. Battery life is impressive.

The KEY2 will appeal most to old-school BlackBerry fans who simply want to continue using a keyboard-equipped handset. For others looking for a change, it's perhaps an overpriced option -- and giving up today's larger screens might be too much of an ask. 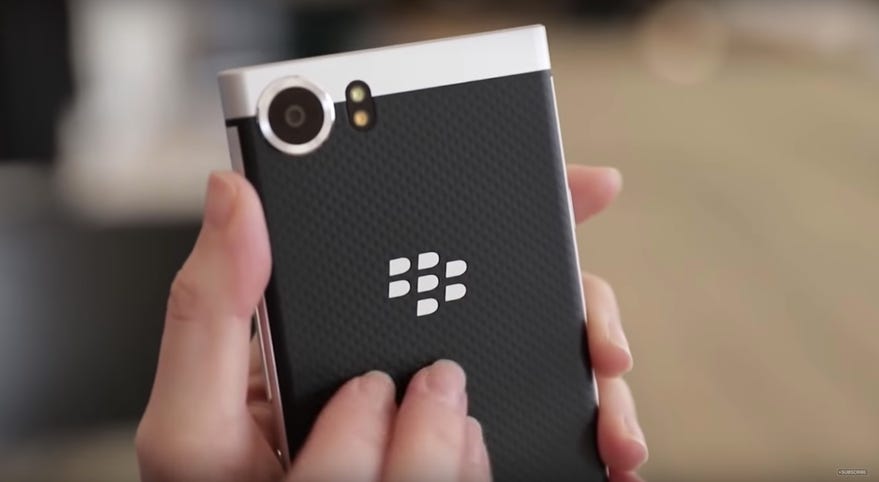 Nostalgia aside, the BlackBerry KEYone is a smartphone with a physical keyboard done right.

The KEY2 is slimmer and lighter than its predecessor, and keeps the flag flying for keyboard-equipped smartphones with a range of enhancements.

BlackBerry KEY2 first look: Improved physical QWERTY for those who can't give them up

Business users adored their hardware QWERTY BlackBerry keyboards, but most of the world has moved to on-screen keyboards over the last decade. The KEY2 provides the best physical keyboard, but that comes with some compromises.

In a market without keyboards, BlackBerry presses on

Early smartphone users cursed the awkwardness of software keyboards. But for BlackBerry to come back, it will need to crack a market that has embraced typing on glass.

BlackBerry Key2 review: Strictly for keyboard die-hards (CNET)
If you rely on an older BlackBerry phone, the BlackBerry Key2 is a worthy upgrade, but it will frustrate people switching from all-touch phones, despite some winning extras.