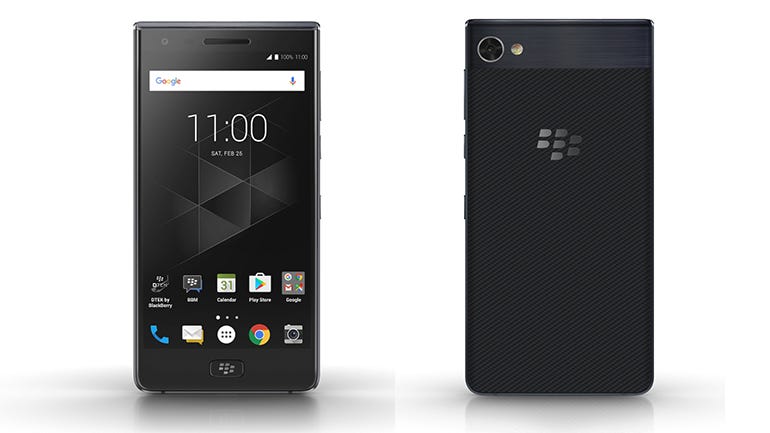 The BlackBerry Motion is the second handset to come from BlackBerry Mobile: TCL Communication now licences the BlackBerry brand for smartphones (TCL also makes Alcatel handsets and some under its own name too). The first smartphone from this deal, the BlackBerry KEYone, came with a physical keyboard, whereas the Motion is a more standard touchscreen-only device. Like the KEYone, the Motion runs Android, and also features a number of touches that may endear it to business users. It costs £399 (inc. VAT).

The BlackBerry Motion is a solid-looking and feeling handset with an aluminium frame and a textured back that provides a solid grip. The curved edges at the bottom of the handset make it comfortable to hold, while the rounded top slips easily into your pocket, although at 8.1mm it's one of the thicker smartphones on the market. At 167g it's a decent weight considering the 5.5-inch screen size; it also has an IP67 rating for dust and water resistance (which is pretty standard now).

The 16:9 aspect ratio display offers FHD resolution (1,920 x 1,080 pixels) for a moderate 403ppi pixel density. Image quality is bright and clear, although the bezels above and below the display are rather large, giving it a moderate screen-to-body ratio of 70.8 percent (minimal-bezel designs have ratios above 80%). The 5.5-inch screen puts it in the same size category as the iPhone 8 Plus, Huawei P10 Plus and Moto Z2 Force.

The bottom bezel houses the physical home key, which also incorporates the fingerprint sensor. I'm not a huge fan of physical home keys, although it can be used to scroll up and down through alerts and settings. The embedded fingerprint recognition worked, but not as flawlessly as others I've tried, and it would sometimes take a couple of attempts to get it to recognise my digits.

I first viewed the convenience button as an irritation, but it quickly grew into a favourite. It sits half-way up the left side of the Motion, beneath the power button. This meant I regularly got mixed up between the two during my testing -- hence the initial irritation. But it does have its charms too. The button can be programmed to display three on-screen app shortcuts, allowing you to jump straight to your most used services quickly. I found this to be surprisingly handy (when I managed to hit the right button, that is).

The BlackBerry Motion packs a 2GHz octa-core Qualcomm Snapdragon 625 chipset with a 650MHz Adreno 506 GPU and 4GB of RAM -- the same platform as the KEYone. From a general performance point of view these keep the handset motoring adequately with no obvious lags, although this mid-range SoC's performance lags behind that of cutting-edge smartphones with more powerful chipsets.

There's only 32GB of internal storage on the BlackBerry Motion, whereas its KEYone stablemate also has a 64GB option. This is a moderate storage complement in today's smartphone market, but at least you can add to it via the handset's microSD card slot.

The BlackBerry Motion packs a huge 4,000mAh battery, one of the biggest available, which makes battery life one of this handset's standout features. It just keeps going and going -- BlackBerry claims '32+' hours. It's a bigger battery than the KEYone (3,505mAh) and also supports Quick Charge 3.0, which promises to give you 50 percent charge in 41 minutes. During testing I've been getting two-day battery life, and sometimes longer, with moderate usage, which is very impressive.

Another neat touch is that when the phone is locked and charging a bar will climb up the right side of the screen showing how charging is going: a short red line lengthens and turns green as the battery fills up.

The 12-megapixel main (rear) camera comes with a couple of handy business-focused features. For example the 'scanner' mode allows you to take a photo of a business card and use optical character recognition to turn that information automatically into a contact, which is a nice touch.

Locker mode allows you to snap photos with an extra layer of security. Photos can only be taken by putting a fingerprint sensor and these images can then only be viewed by putting a fingerprint back on the sensor. According to BlackBerry this allows you to "hide your photos of weekend escapades or private selfies from people that may look at your phone." Equally, it could be used to add a little more security to business information.

The test shots I took with the rear camera were good -- solid, if unremarkable. While this is fine for a business phone where the camera is rarely used, for those people who want to use the same device for home and work this may be something of a sticking point. Cameras are a key consideration for consumers and premium handsets will offer richer features such as dual-sensor setups on high-end Apple, Huawei, LG and Samsung devices. If you're after advanced features like bokeh, the BlackBerry Motion's camera may be rather limiting.

These days, BlackBerry handsets run on Android rather than BB10, and in the case of the Motion that's Android 7.1 Nougat. This means it comes equipped with the standard set of Google apps like Gmail and Google Maps. But it also packs a number of preloaded BlackBerry apps and features, which may go down well with business users.

Among these is the BlackBerry Hub, which allows you to consolidate email, social media and other notifications into one feed so that you can check all your messages in one go. This is a handy timesaver and has the added advantage of helping to wean you off social media as you don't need to open those apps to see if you've been mentioned.

Related to this is the Productivity Tab, which you can access by swiping from the right of the screen. This gives you instant access to calendar, messages, tasks and contacts; I found it very useful for a quick refresher on which meeting I was heading to next, for example, without having to open any apps.

The handset also comes with the DTEK app, which aims to give you an overall view of the current security and privacy level on the phone ('excellent', 'fair' or 'poor') and what you can do to improve it. Much of what it measures is basic good security practice, such as whether you have set a screen lock, or whether you have decided to download apps from beyond Google Play. More granularity would have been welcomed here.

Some of these check boxes are rather banal: you'll get a tick for device hardware from the app for simply having a BlackBerry device, and for running Android. However, it's a reasonable snapshot of basic security. DTEK can also track if apps are taking pictures or videos without your knowledge or behaving in other suspicious ways, such as turning on the microphone or sending a text message.

The Privacy Shade is another nice feature for the security conscious. If you want to check something on your phone without displaying everything else on the screen too, the Privacy Shade effectively creates a letterbox through which you can view one part of the screen while the rest remains in darkness. The box can be moved around and can change shape.

The BlackBerry Motion is a solid mid-range Android handset with some handy features aimed at business users -- at a time when handsets are explicitly targeting that market.

Bolting some of BlackBerry's best ideas around productivity and security onto the familiar Android operating system should give the touchscreen-only Motion all-round appeal, although the camera subsystem (12MP rear, 8MP front) is no better than average. However, that giant 4,000mAh battery should make it easier for mobile professionals to remain productive on the move.