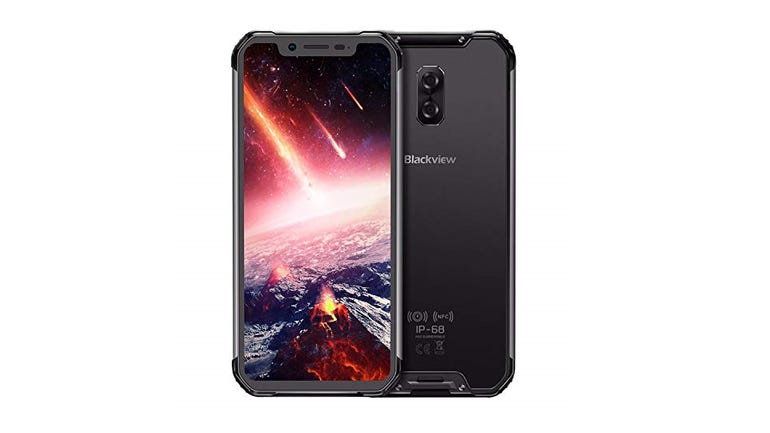 The Blackview BV9600 Pro strongly reminds me of another phone I reviewed recently: the Doogee S70. Both are very similar in look and feel.

Dustproof, shockproof, and waterproof, the BV9600 Pro is an IP68 rated rugged phone, meaning it can be submerged in up to 1.5m of water for up to 30 minutes.

It has a rugged housing of aluminium alloy with a matte black back and Gorilla Glass.

Also: Phones and more: The best of everything mobile

This phone gives you a lot for your money at under $500. Inside the box there is a power adapter, USB C charging cable and a USB-C set of headphones.

The BV9600 Pro uses the USB port for  headphones, too. Usefully there is also a micro USB-to-USB-C charge adaptor –- useful if you do not have the correct cable with you and need a quick charge. It is a tiny adaptor, so I reckon it will quickly get lost.

I like the size of the screen. Minimal bezel sizing means that Blackview has managed to squeeze a 6.21-inch display into the phone with an 2248x1080-pixel display. I like the 19:9 aspect ratio, too, and the display is crisp and clear.

You can use the phone wearing gloves -- or with wet hands, too (very useful when you are out and about and are using your phone in the rain).

The phone supports fast charging, and wireless charging, although the charging pad is not supplied with the phone. Its dimensions are 162.9 x 81.4 x 12.85mm

There are some nice extras with the phone. In addition to NFC and fingerprint recognition, the device also has the ability to cast to other devices in the vicinity. It uses the Android Beam app to connect over NFC.

The fingerprint sensor is on the right hand edge of the phone. If you hold the phone in your right hand, then you only have the option to use your thumb as a fingerprint, not as flexible as sensors elsewhere on other devices.

There are distance sensors to stop your phone activating when it is in your pocket, and the ability to mute the device when it rings by turning it over. You can also make and receive calls by lifting the phone up to your ear.

The ring tones are very loud indeed -- very useful in construction environments, or if you keep your phone in your bag.

There is a push button on the left hand side of the screen, which can be configured for one click, double click, and long press use.

There are a variety of commands that can be invoked. You can start to record audio, open the flashlight app, take a screenshot, open the water camera, the PTT feature (push to talk) SOS and game mode. The Zello PTT app is not installed by default on this model.

However, there are a suite of useful tools on this Android 8.1 Oreo build. The ToolBag has a compass, sound meter, and picture hanging app. A gradienter, a height measurement tool, and a heart rate monitor app.

There is also a magnifier, protractor, plumb bob, and a barometer app. Other useful apps in the build include a pedometer and a translator.

The translator enables you to enter text, or use voice to translate into 105 languages. There is no phone feature for you to translate text by taking a photo of the text and getting it translated. However, this is a small omission.

There is a 16MP camera and an 8MP backup camera for bokeh images -- but I was not too impressed by the amount of blur in the images. Its front facing camera is 8MP.  Post image enhancements are adequate for a camera such as this.

There is also a child mode feature, which allows you to set a password and time and data restrictions when someone else uses your device, along with the apps permitted to be used during the setting.

All in all, this is a nice rugged phone, which would suit both corporate and consumer users. Its large battery gives a good amount of uptime for all of your regular activities with an added bonus that it will take the rough and tumble of active users.