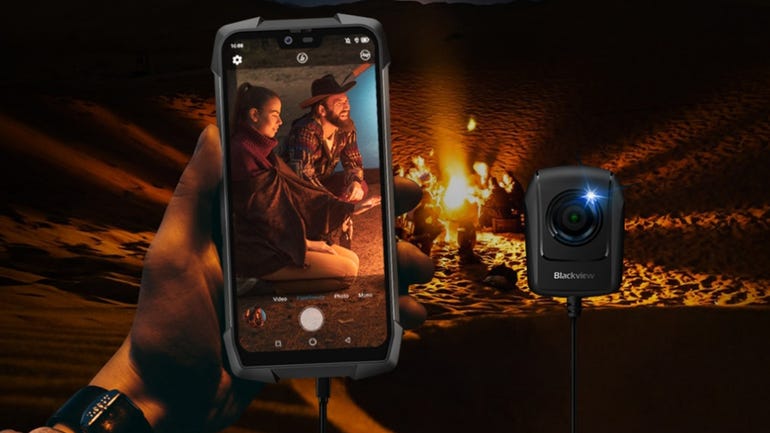 I like the look of the Blackview BV9700 Pro. I reviewed the BV9600 Pro in January -- and apart from its weight, it was a nice streamlined rugged phone.  I have found the recent rugged phones from Doogee -- the S60, S80 and especially the S90 -- cumbersome for my small hands. The BV9700 Pro is much more manageable for me.

As with all rugged phones, the BV9700 Pro is dustproof and waterproof. Rated at IP69, the phone can withstand immersion in water up to a depth of up to 1.5 meters for up to 30 minutes, and survive a 1.5-meter fall.

Its rubber bumpers are raised at each corner giving the phone a chunky look. The sides of the device are an aluminum alloy, which gives it a nice look and feel.

Its external dimensions are 165.9 x 81.3 x 16.5mm, and it weighs 283g.  This is almost exactly the sime form factor as the Ulefone Armor 6 in dimensions, and not as slim as the Cubot Quest phone I reviewed in June.

Inside the phone, there is a MediaTek Helio P70 chip with 6GB RAM 128GB ROM. The OS is Android 9 Pie, which is excellent and responsive -- even when running several apps. Its 4,380mAh battery easily lasts for a day of heavy use.

The on-board cameras include 16MP and 8MP at the rear and 16MP at the front for selfies. There is also an external night vision camera with a Sony STARVIS IMX291 lens -- the same as in the Thinkware f800 Pro dashcam.

This attaches to the phone via USB-C. I plugged it in and waited for something to happen.  Nothing happened. The phone did not recognize the external camera. I eventually found the leaflet that came in the outer camera box.

Instructions were to "connect to mobile phone through the Type-C interface, download APK," followed by a QR code. The BV9700 Pro camera will not recognize QR Codes from its on-board camera, meaning I had to download a QR code reader from the Play store.

On scanning the QR code, a browser opened pointing to the Mega cloud storage (mega.nz) and a page titled "Night Camera 1.3.2 release."

I downloaded the file to the phone and tried to save the file -- despite a warning telling me that 'This type of file can harm your device.' I pressed ahead -- even though a warning from Chrome reminded me that the phone would not let me install apps from this source.

I reconfigured Chrome and finally installed the night camera. This is a messy solution Blackview -- it needs to be much more streamlined. I reckon many non-tech users would have given up long before this point. I would not have installed this at all had I not been writing about it. It is not a robust and workable solution for many potential users of this device.

The night view camera is not operated from within the main camera app but installs its own app. However, once over all of these hurdles, in use, the camera does take great photos in low light conditions.

Its long cable means it can be clipped to your jacket and operated remotely using the buttons on the camera cable. You do need to remember to allow the phone screen to auto rate to show how the image will look in full screen.

The additional camera is a great add on -- if you know to get the software downloaded and installed successfully.

Other features of the BV9700 Pro are much better. The phone is unlocked by either face recognition -- using the front-facing camera -- which is nice and fast.

The fingerprint sensor is handily placed just under the power button, meaning that by holding the phone in the right hand, the thumb is the obvious print to use.

The rear sensor, which looks like a fingerprint sensor, is for the Heart Rate Monitor. Place your fingertip over the sensor, and your heart rate will be recorded and stored. There is also a pedometer to record your daily and weekly steps and track your routes using Google Maps.

The Toolbox has other useful tools such as a Plumb Bob, Compass, Height Measurement, and Protractor. Usefully the BV9700 Pro also has some other tools. There is a gas monitor that checks the density of CO2 over 15 minutes -- a handy addition if you work in industrial or confined spaces.

All in all, the phone has some great features and is fast. If you do not need the optional night vision camera -- do not need to go to the hassle of installing it. Stick to the on-board camera which will suit most needs.