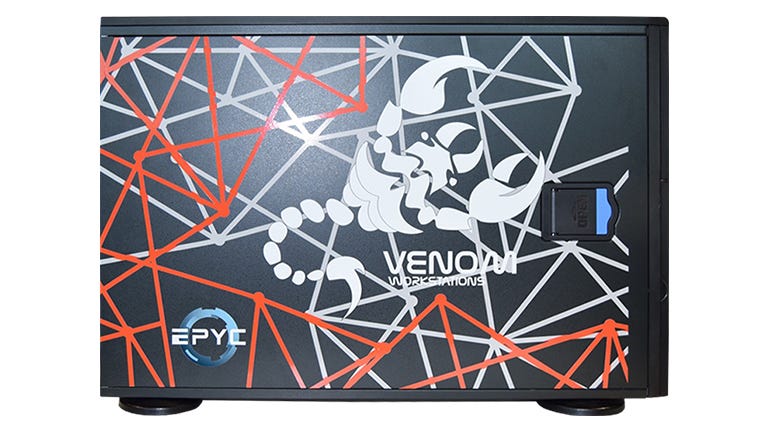 It's taken longer than expected, but products built around AMD's EPYC processors have finally started to ship and they're not all servers. High-end workstations are also getting the EPYC treatment, including the appropriately named Venom EPYC Workstation from Boston Limited. According to Boston, the Venom EPYC is more than a match for pricier Xeon-based alternatives, particularly when it comes to compute-intensive CGI/VFX and virtual reality programs.

EPYC to the core

The EPYC processors are the big talking point on this workstation, and Boston provided ZDNet with a typical dual-socket configuration built for the product launch -- hence the eye-catching graphics on the casing in the photo. Normally it's all plain black, but we were told that requests for custom designs would be considered.

Designed to sit next to or under a desk, the Venom EPYC in standard livery doesn't look any different from other Xeon-based Venom products. Inside, however, it's all change with a new Supermicro motherboard able to take any processor from the EPYC 7000 series, which comprises processors with eight, 16, or 32 cores, priced accordingly. Boston, however, expects most customers to opt for the maximum possible and fitted the review system with a pair of 2GHz EPYC 7551 processors, giving the Venom 64 processing cores (128 threads) across its two sockets.

Those 64 cores put the EPYC at a real advantage compared to Intel alternatives with the latest Xeon Scalable Processor family topping out at just 28 cores per socket. Moreover, if you compare them on price the nearest competitor to the EPYC 7551 is the Xeon Gold 6152, which has just 22 cores per socket. That would mean 20 fewer cores (40 threads) altogether on a price-comparable dual-socket Xeon system.

Just how that might translate into measurable benefits is down to the applications involved. To get some idea, however, we tested both setups using Cinebench, with the Venom EPYC recording a processor score of 6753 compared to 4714 for a similar workstation with Xeon Gold 6152 processors. That's a significant difference (43.2 percent), which could only be addressed by throwing money at the problem and opting for more expensive Xeons. But it's not all about the processors, and there are other factors to take into consideration -- not least memory, storage and (especially on a workstation) the all-important graphics subsystem.

In terms of memory, there's little in it. Both types of processor support DDR4 RAM clocked at 2,666MHz with AMD's EPYC having eight communication channels per socket compared to six with Intel's Xeon. The EPYC can also handle a lot more RAM: up to 2TB spread across 16 DIMM slots on the Venom workstation. However, that's only an advantage for customers able to make use of that amount. Most will be more than satisfied with the 256GB that comes as standard, which is a good starting point for this type of workstation.

Customers who think they might want to add more memory need to point this out when buying, to make sure some of the DIMM slots are available. On our review system, all 16 slots had been used.

Storage can also be scaled to suit, the base workstation shipping with a single 1TB SATA disk that looks a little lonely in the eight hot-swap bays provided. But then customers can opt to add whatever SATA disks they need, or SSDs; or they can switch to SAS rather than SATA and go for a RAID configuration. In addition, the Supermicro motherboard has a couple of tricks up its sleeve in the form of NVMe support, which allows solid-state storage to communicate direct with the processors via the PCI-e bus rather than be throttled by a much slower SATA controller.

The NVMe support is available in two formats here, starting with an integrated M.2 slot filled, on the Venom EPYC, by a 512GB Samsung 960Pro NVMe SSD. This makes for very fast boot times as well as providing applications with high-performance working storage compared to using SATA which, on this product, is expected to be used mainly for long-term bulk storage.

On the downside, 512GB isn't much given the typical workloads of most workstation users and, with only one M.2 slot, some customers might also be concerned about lack of redundancy. As such higher-capacity NVMe cards can be specified, added to which the Supermicro motherboard also has an additional set of four U.2 NVMe ports which can be cabled to compatible SSDs fitted in the disk bays at the front of the chassis.

The crucial graphics subsystem, as is to be expected on this type of workstation, is catered for via a plug-in GPU. The market leader here is Nvidia with its Quadro family of products, but these can be expensive and the standard fare on the Venom EPYC is another AMD part -- a Radeon Pro WX 7100.

The WX 7100 is the most capable of the single-slot Radeon Pro family, competing against the Quadro P4000 from Nvidia but at a much lower price point (saving around £300 in the UK). Despite the lower price, the Radeon Pro WX7100 is a very capable GPU based on AMD's Polaris architecture with 2,304 stream processors delivering up to 5.73 TFLOPs of compute performance to accelerate large-scale parallel graphics tasks. It also benefits from 8GB of GDDR5 memory, enabling the WX 7100 to cope with large datasets across a broad spectrum of applications from CAD/CAM to real-time rendering apps as well as CGI, VFX, gaming, and AI.

The Radeon Pro WX7100 is also fully compatible with the AMD LiquidVR SDK, which is designed to give developers all the tools they need to build and support VR applications. It also benefits from a 10-year AMD warranty.

Implemented as a single-slot PCI-e adapter with its own cooling fan, the WX7100 sits in one of two PCI-e x16 expansion sockets inside the EPYC and has four DisplayPort sockets, each able to drive an external 4K display at 60HZ. Alternatively, it's possible to hook up two 5K (5120 x 2880 pixels) displays, again at 60Hz or just one at 8K and 30Hz.

Monitors aren't included in the price, but that's standard on a workstation and most makes can be supplied to fit customer requirements. Likewise, buyers can opt for Nvidia graphics if they prefer -- for example, to support applications dependent on Quadro drivers or to utilise Nvidia's parallel computing architecture, CUDA.

Other features are the same as on most other high-end workstations, with a robust tower chassis complete with removable side panel for access, redundant power supplies, hot-swap cooling fans and a couple of 10GBase-T ports for fast network connectivity.

The question is, why would you buy the Venom EPYC Workstation rather than a Xeon-based alternative?

Compatibility isn't a major issue, but some customers may prefer to stick with Intel because of software and driver dependencies, or support for the latest AVX-512 instruction set, which isn't available on AMD processors. Otherwise it's largely a price/performance decision, with EPYC customers able to save money without losing out on performance to a comparable Xeon system and, in many cases, beating what Intel-based alternatives can do. The Radeon Pro GPU further helps contain those costs without compromising on performance or functionality.

With the AMD GPU fitted, the system we looked at could be yours for £10,688 (ex. VAT), which is very competitive. But it's not all about price and, according to Boston, the Venom EPYC Workstation is already causing quite a stir among graphics professionals, who see it as delivering a performance edge across a broad range of applications.

AMD had an EPYC 2017
2017 was the year that AMD made processors exciting again.

A tale of two server processors: Intel Xeon Skylake-SP and AMD EPYC 7000 Series
The way in which the latest Intel and AMD server CPUs have been assimilated shows how the server market is becoming more complex.