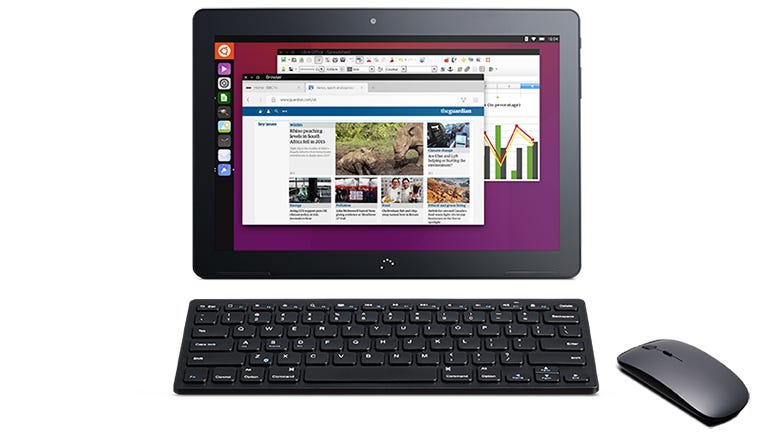 Late in 2015 Canonical announced that it would be working with the Spanish company BQ to produce the long-awaited 'converged smartphone' that would support Ubuntu desktop-like operation when connected to a suitable display, keyboard and mouse. So it came as something of a surprise when the first BQ-manufactured converged device, unveiled at Mobile World Congress in February, turned out to be a tablet -- and not only that, but a tablet without mobile broadband support.

The BQ Aquaris M10 Ubuntu Edition tablet is available either as Full HD model at €279.90 (~£220) or, with a lower-resolution screen and cameras, and a less powerful chipset, as the HD model at €229.90 (~£180). Like BQ's Ubuntu phones, both models of the M10 Ubuntu Edition are available through the BQ online store -- only this time without 'flash' (or by invitation only) sales.

BQ provides a 5-year warranty and 365 days of technical support by phone per year. Along with the tablet, you get a Quick Start guide, a 1m USB-to-MicroUSB cable and a charger (with a 2-pin continental plug) in the box. A full user guide is available for download in PDF form via the support tab on BQ's website.

As its name suggests, the Aquaris M10 has a 10.1-inch diagonal screen, which is protected by Asahi Dragontrail X toughened glass with a fingerprint-resistant coating. The screen's 10-point capacitive touch response has three modes: tap, double tap or long press. Double tap and long press are editable and can be user-assigned to different functions. For Ubuntu, these are augmented by various swipe gestures.

BQ says that the M10 uses AHVA display panels with a 170-degree viewing angle for both models. Advanced Hyper-Viewing Angle (not to be confused with VA displays) is an IPS-like technology, developed and manufactured by the Taiwanese company AU Optronics.

Compared to a calibrated display, the M10 screen's image quality is slightly washed out, with a little too much green. There are no user controls for the display, so you can't adjust this.

Internal technology and other specs

BQ says that the Aquaris M10 is the first tablet in Europe equipped with Dolby Atmos sound, which delivers 3D sound from the two front-mounted speakers.

With the M10 in landscape orientation, the left edge, near the upper corner, has a stereo 3.5mm TRRS jack plus Micro-USB OTG and Micro-HDMI ports. Annoyingly, the USB and HDMI connectors are both close together and not labelled in any way; this makes them hard to tell apart, so you can find yourself trying to jam a connector into the wrong socket. Opposite these, on the right edge, are an on/off button and a volume rocker. Offset to the right of centre, on the top edge, you'll a microphone and a slot for a MicroSD memory card that allows storage expansion up to 64GB, formatted as FAT32.

There's an ambient light sensor and a multi-colour power status LED mounted in the upper bezel, next to the front camera.

The M10 has two cameras, one at the front in the middle of the upper bezel and one behind it at the rear. Again, the HD and FHD models differ. The FHD model, reviewed here, has an 8MP rear camera (at 4:3 or 6.2MP set to 16:9) with a focal length of 3.5mm, while the front camera is 5MP (at 5:3 or 3.7MP set to 16:9) and 3.5mm focal length. BQ does not specify the f numbers for the lenses. The HD model's camera specifications are reduced to 5MP rear and 2MP front. Both models can shoot video at 1080p and both cameras have autofocus.

Contrary to some media reports, there is no flash on either model, dual or otherwise. As with many mobile devices, the display is almost impossible to see in bright sunlight, so operating the tablet as a camera under these conditions isn't easy. A further complication is that it's difficult to maintain a firm grasp on the tablet without inadvertently placing a finger on the touchscreen and blocking the operation of the shutter button.

The camera app needs some work because, when the tablet is oriented in landscape mode and connected to an external display, the image from either camera appears as portrait, but with the actual image rotated 90 degrees, so it appears sideways. With the tablet screen in portrait orientation, the video and camera switch toggles and the shutter button appear at the bottom of the display and swiping up reveals the further camera controls. When rotated to landscape, although an arrow appears in the centre of the lower edge of the display, only a swipe up, directly below the visible camera buttons, will reveal the other camera controls.

If the version of Ubuntu currently available for the M10 -- 15.04 (OTA-10.1) when reviewed -- were fully convergent you would expect its operation to be instantly familiar and fluid for anyone who has experience of Ubuntu on the desktop, and perhaps on a smartphone. Right now, though, that's not the case.

There is a problem in trying to design user interfaces for mobile devices that try to be smart: the input/output surface is small. Using touch input saves on space for a keyboard, but at the same time point accuracy is limited to the size of a fingertip. Small screens therefore require relatively large icons and text. Tablets occupy the space between relatively large laptops and highly portable and convenient smartphones. Unfortunately, like phones, without app interface scaling, tablets aren't generally big enough for the icons and menus of typical desktop applications -- the type of software most of us still use to get useful work done -- to be easily selectable (or even, in some cases, readable). The M10, running the first version of Ubuntu to offer a glimpse of convergence, brings this inherent problem into sharp focus.

On initial power up the M10 runs a setup wizard to configure the tablet for individual use, allowing you to select language, configure lock security, connect to a wi-fi network and activate location services.

The M10 can operate in Tablet and Desktop modes, and in both the familiar Launcher bar appears on the left edge of the display with the system status and control menu along the top. In tablet mode, the Ubuntu icon appears at the bottom corner of the display, with the pinned apps above it, which is similar to Ubuntu running on a smartphone. Switching to desktop mode (by pulling down the System menu from the top menu bar and flipping the Desktop mode switch) reverses the order of the pinned apps and shifts them up, so that the Ubuntu icon appears at the top corner of the display. However, the orange Ubuntu icon always acts as it does on a phone, and opens Scopes -- there is no desktop Dash.

Right now, therefore, Ubuntu on the M10 is more like Ubuntu for Phones than Ubuntu Desktop. This raises concerns that a unified, fully converged Ubuntu may end up 'dumbed down', having been compromised in an attempt to fit into the simpler, touch-centric, mass-market world of phones and tablets.

Starting from the Scopes button, the apps pinned by default to the Launcher bar are: Contacts, System, Camera, Gallery, Browser, Xchat-GNOME and LibreOffice. Icons for open apps also appear in the Launcher and can be pinned there by touching and holding until a pop-up label/menu appears and then selecting 'Pin shortcut' from that pop-up. Unpinned apps can be opened from the Apps Scope, which also provides the link to the Ubuntu Store. Desktop users might expect to see a File manager as a pinned app: instead, a File manager app is available for download from the Ubuntu Store.

Like the Ubuntu phones, the M10 tablet comes with apps for two Spanish newspapers -- Cinco Dias and El Pais -- installed by default, which most English-speaking UK residents won't want.

LibreOffice as a default pinned app is an interesting choice because although it's is an excellent FOSS office suite and very usable with a large external display, it's decidedly not small-screen-friendly. LibreOffice may only be included to demonstrate the M10's ability to run an office suite when connected to an external display and keyboard. However, when opened on the tablet display, the menus and icons are ridiculously small.

In desktop mode, apps can be windowed, minimised and closed, while in tablet mode apps occupy the entire screen with the option to display a second app in a side stage on the right of the display.

A mouse click, or downward finger swipe, on any of the system status and control icons in the top menu bar results in the related control panel being displayed as a Side Stage, rather than a drop-down box as it currently does in Ubuntu Desktop. System Settings maximises to full screen and is the Ubuntu Phone version rather than the GNOME version familiar to desktop users.

When an external display is plugged into the M10's Micro-HDMI output, the tablet's own screen blanks and displays this message: "Your device is now connected to an external display. Use this screen as a touch pad to interact with the pointer". If a Bluetooth mouse is connected, that also remains active as a pointing device.

Canonical has been promising desktop-mobile convergence for a long time -- Mark Shuttleworth announced that Ubuntu would be moving in this direction with the Edge superphone project in July 2013. BQ's Aquaris M10 Ubuntu Edition still seems like a work in progress, and doesn't always respond as expected -- either due to bugs in the software, or to inconsistencies in the user interface. As a result, interest in this tablet is likely to be restricted to Ubuntu fans and determined early adopters.

Fortunately Ubuntu updates are frequent and easy to apply, so many of the current problems with Ubuntu as a tablet OS should be solved in the coming months -- hopefully before this particular device becomes obsolete.