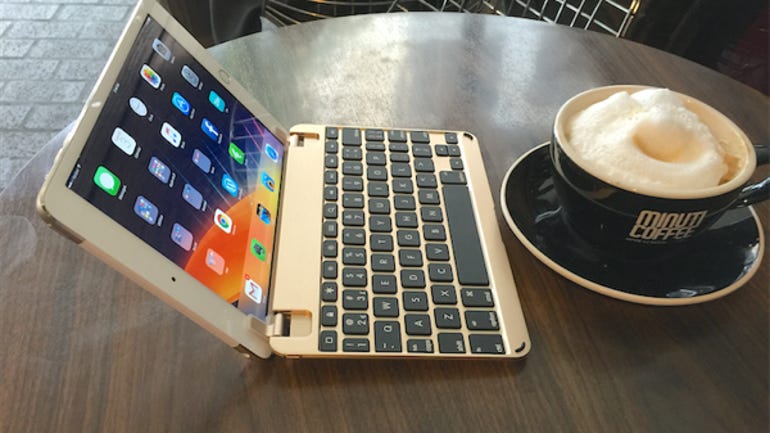 The keyboard will fit all iPad mini models except the newest, the iPad mini 4. A set of shims are included and adjust the keyboard hinges to fit the different iPad mini models. The preinstalled shims fit my iPad mini 3 perfectly and I didn't need to use the extra shims.

The hinges allow pushing the tablet back almost 180 degrees for maximum utility when in laptop mode. They tilt the tablet to an ergonomic angle when open for typing. Closing the "lid" forms a closed laptop for transport, and due to the small size of the BrydgeMini, which is precisely sized to the small iPad, it will fit in even the smallest gear bag.

The Bluetooth keyboard pairs easily with the iPad mini by pressing a button on the front of the unit to the right of the power slider. It charges via the included microUSB cable and lasts three months on a charge.

The BrydgeMini keyboard meets all of the requirements. Using a combination of resized keys that go to the very edges of the unit, all keys are where you expect them to be. It handles rapid typing even for those of us with large hands. To make this work several lesser-used keys, including ],\,=,+, have been combined on two different keys. Each character is accessed in combination with a different control key. This sounds impractical but with a little practice becomes natural. This is due in large part to Brydge's positioning these two keys where they fall on full keyboards.

Using the BrydgeMini quickly became second nature to me, especially given my history using mobile keyboards. It's not as fluid as using a bigger keyboard with the iPad Air 2 as I do most days, but it is a reasonable alternative. The biggest adjustment I had to make was the under-sized Shift keys. It's not a deal breaker for me but may be a hurdle for some.

There is a Caps Lock key with LED indicator, and three levels of backlighting. It's surprising that Brydge was able to squeeze these features into the tiny device. There is also a row of iPad control keys above the number keys.

Note that the iPad mini fits so low in the keyboard that it is difficult to swipe up from the bottom of the screen to access common iOS settings.

Like the larger BrydgeAir, the BrydgeMini comes in three colors to match available colors of the iPad mini. The gold unit matches my gold iPad mini 3 perfectly, and looks as if it was produced by Apple. Given the small size of the device there are no Bluetooth speakers as found on the BrydgeAir.

The BrydgeMini is available now for the iPad mini 1, 2, and 3 from the company for $129.99. This is expensive but given the premium design and construction the price is not unreasonable.