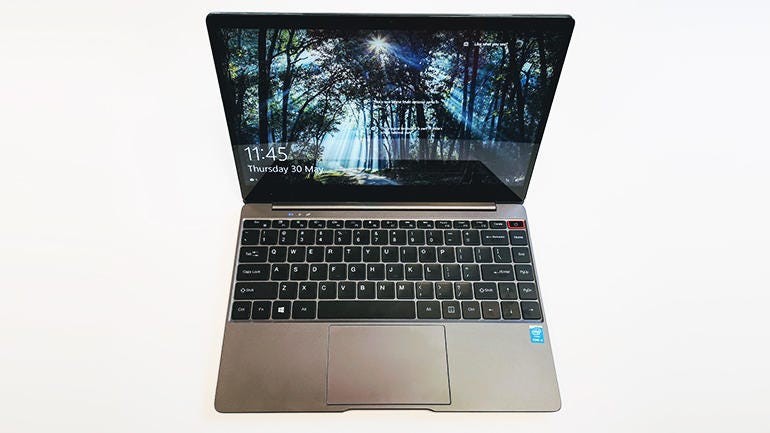 Chinese gadget maker Chuwi has carved itself a pretty solid niche making cheap-and-cheerful tablets and laptops. I've recently reviewed both the HeroBook and LapBook SE notebooks on these pages and found them to offer excellent value for money: Capable, fully fledged 14 and 13.3-inch Windows machines for less than the price of an entry level 11.6-inch Chromebook.

With its new AeroBook, Chuwi is making the dreaded 'move upmarket' by offering a higher specification machine than ever before, but at a higher price -- $499 from Amazon's US store or £365 from Chuwi's AliExpress outlet.

On paper, Chuwi still delivers your money's worth: the AeroBook offers 256GB of SSD storage, 8GB of RAM, a Core M processor and an FHD (1920 x 1080) 13.3-inch IPS display, all wrapped up in a very handsome dark grey alloy shell.

The only apparent fly in the ointment is the age of the processor, which is Intel's dual-core Core m3-6Y30. It's far from gutless: even though it ticks over at just 900MHz, it can manage 2.2GHz with its Turbo Boost running shoes on. But it's still a 6th-generation Skylake chip launched in the second half of 2015.

Chuwi has long aped Apple's MacBook design language, but with the AeroBook it has finally come up with a product that could -- just -- pass for one of Cupertino's best if you covered the logo.

It's difficult not to be impressed by the AeroBook's clean, crisp, industrial design. The slate-grey brushed alloy body looks very business-like and the Chuwi logo on the lid is nicely restrained.

Build quality is impeccable. The lid, for example, has very little flex to it and the one-piece hinge feels reassuringly sturdy. The keyboard surround is the only place Chuwi has employed plastic rather than metal -- not that you'd notice.

For a 13.3-inch machine the AeroBook is usefully light and compact, measuring up at 308.5mm by 209mm by 15.2mm and weighing 1.26kg. To put that into context, the AeroBook is 110g lighter than the 13.3-inch MacBook Pro and near enough the same size that cases made for the Apple machine should fit nicely.

With two USB 3.0 ports, a mini-HDMI socket and a full-spec USB-C port, the AeroBook is well connected. There's also a seperate power jack if you want to keep the Type-C port free. A MicroSD card slot and 3.5mm audio in/out jack round things out.

Fire up the AeroBook and you'll find yourself looking at a rather fine, fully laminated (although not touch-enabled) IPS display with a maximum brightness of 375 cd/m2. That's much brighter than I expected in this price bracket. It's very colourful, too. Looking at colour gamut, the AdobeRGB figure of 75% is pretty impressive for a budget notebook. The sRGB figure was a similarly surprising 95%.

Chuwi reckons the screen takes up 80% of the body area, which sounds like a reasonable claim. The 6mm side bezels are certainly impressively slender.

Sitting below the screen you'll find a more than decent keyboard. The travel of the slightly concave keys is just about ideal and there's a good level of feedback. There is some flex to it in the middle (around the G/H/J keys), but you have to press down very hard to notice.

The two-stage backlight and clearly distinguished power button are welcome features, although as with all the other Chuwi notebooks the keyboard is of the international type, which means the £ sign and a few other symbols are not where British users would expect.

The large, one-piece touchpad has a pleasant, slightly matte finish and a very precise click-action.

The Core M AeroBook feels noticeably faster than the Celeron-powered LapBook SE in the vast majority of circumstances, thanks to that superior single-core performance. If you moved from one to the other blindfolded, you'd have no problem telling which was which.

With only Intel's rather feeble HD Graphics 515 GPU available to shunt pixels around, the AeroBook is clearly not designed for serious gaming.

I did manage to run Quake Champions, albeit with the resolution knocked back to 720 by 1280 to get a half-decent frame rate. And after 20 minutes of play the AeroBook got rather warm -- passive cooling and first-person shooters do not make good bedfellows. Other titles like Counter-Strike and DOTA 2 ran just fine at the native resolution.

It's worth mentioning that the Core m3-6Y30 has a TDP of only 4.5W compared to the N4100's 6W, but you can tweak the power limits in the AeroBook's BIOS (accessible via the Escape key) to boost the performance of both the CPU and GPU. In fact if you want to tinker with any or all the all the BIOS settings you can, because it's completely unlocked.

The ageing chipset raises two other issues. It only supports HDMI 1.4, so you have to live with 4k output at a maximum of 24fps. And secondly it lacks native hardware decoding for 10-bit H.265/HEVC and VP9 video, which can lead to some judder during playback of certain UHD videos.

I personally don't regard either as a deal breaker on a sub-£400 machine that's clearly designed for general productivity rather than 4k video wrangling.

Like all Chuwi laptops, the AeroBook has a slot for a 2280 M.2 SSD in the underside. Early versions came with 128GB of eMMC storage and the expansion bay empty so you could add as much extra capacity as you wanted. My review machine came with a 256GB Netac SSD pre-installed.

The exact specification of the AeroBook changed as the Indiegogo fundraising campaign for its development crossed various thresholds, hence the existence of early examples without the USB-C port and without the SSD. The review machine on my desk is, I assume, the final production version.

If given the choice I'd actually prefer a cheaper 128GB eMMC option and to add my own SSD. Why? Because the AeroBook works beautifully with Linux. I tried both Ubuntu 19.04 and the Intel-backed Clear Linux distro on the AeroBook and they ran faultlessly. So ideally I'd leave Windows 10 on the eMMC and install a Linux distro on an SSD.

At least the easy-to-access SSD bay means that swapping up to a 512GB or 1TB card is very straightforward.

The Intel AC 3165 dual-band 802.11ac/b/g/n wireless card worked well and I experienced no problems with wi-fi reception even in known black spots. The associated Bluetooth radio is 4.2 spec and performed as expected.

The 38Wh battery gives reasonable endurance. In mixed use -- a little productivity, some web browsing, perusing the odd YouTube video -- with the screen brightness set to 60% you can get about 6.5-7 hours from a full charge. Chuwi's LapBook SE can manage two hours more. Loop a 1080p video file and you'll make it to the five-hour mark but not much further. A full recharge takes a little over two hours using the bundled power supply.

By Chuwi's standards the quality of the loudspeakers is good -- there's no distortion and even a little bit of bass -- while the 720p webcam and microphone are not bad either. Sound from the 3.5mm audio jack is clean and static-free. Finally, just to clarify something I'm regularly asked about, these Chuwi laptops arrive with a bona fide English version of Windows 10 Home rather than a Chinese-language version.

Has Chuwi's move upmarket worked? I'd say so. The AeroBook is a great looker, well made, well specified and performs faultlessly. The only niggle is the somewhat dated Core M processor, but fitting a more modern iteration would presumably have had an impact on price, assuming that Intel's current supply problems with its 14nm chips made that a logistical possibility. Despite that drawback this is a very fine laptop for the money. The real head-scratcher is deciding if it's worth £150-plus more than the not entirely dissimilar LapBook SE.