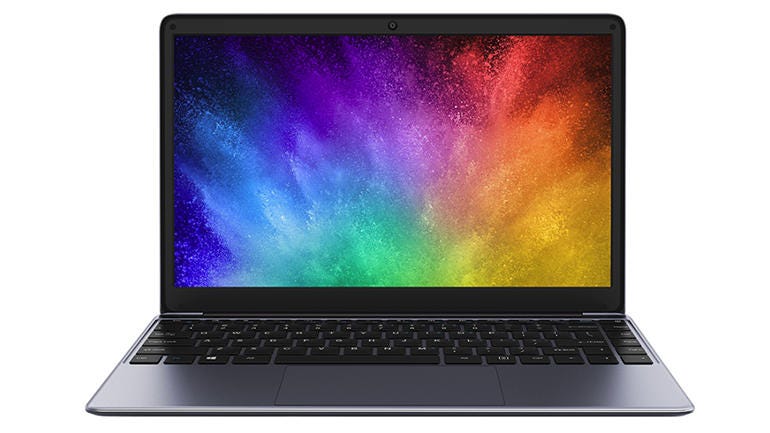 Is it possible to buy a decent laptop for £160 (around $200)? An 11.6-inch Chromebook is just about doable for that sort of money, but getting a full-size Windows 10 notebook on a budget that small is a tall order. Until now.

Chinese laptop-maker Chuwi has form when it comes to delivering good-value budget notebooks. Late last year I reviewed the LapBook SE, a rather fine Gemini Lake machine retailing for around £220.

Now Chuwi has attempted to go one better by launching a budget machine for £162 called the HeroBook. But just how heroic is it?

Open the box and you'll find a handsome if somewhat generic notebook measuring 332mm by 214mm by 21.3mm and weighing just under 1.5kg. That's par for the course for a 14-inch laptop.

I suspect the designer of the HeroBook had an Apple notebook on their desk to provide inspiration: like all of Chuwi's laptops, the HeroBook looks very MacBook-ish. The silver-grey colour scheme only emphasises the similarities.

The build quality doesn't match Apple's, but despite being made entirely of plastic the HeroBook is creak-and-squeak-free and the one-piece screen hinge is reassuringly solid.

Initial versions of the HeroBook featured a matte-finish 1,366-by-768 TN screen. Unexpectedly my review unit turned up packing a Full HD (1,920 x 1,080) IPS panel -- and that's despite the sticker on the box telling me I had the lower resolution. The FHD screen makes a difference: it's crisp and colourful, if somewhat lacking in brightness, and would do justice to a notebook costing three times as much.

I reached out to Chuwi to see if the display upgrade was deliberate, permanent and would impact the price, but didn't get a firm answer before deadline. Check before you buy. The reviews I've seen of the TN panel suggest it's not great.

The US-format keyboard is pretty decent given the price. Granted it's a little noisy and the deck isn't the most solid you'll ever encounter, but the keys are large and well spaced, the action reasonably clean and the 1.5mm travel well judged. The keyboard isn't backlit, but the large one-piece Precision trackpad needs no apologies: it's pleasant to the touch and works perfectly.

Driving the HeroBook is an Intel Braswell quad-core Atom x5-E8000 processor and associated Intel HD Graphics GPU. It's not one of Intel's Atom SoCs I've encountered in the wild before.

The x5-E8000 is a low-power (5W TDP) chip originally intended for use with embedded applications such as digital displays, retail terminals and IoT devices. The component is three years old, so I assume that Chuwi picked up a job lot at a good price to tide it over Intel's current Gemini Lake supply woes.

It may be a fish out of water, but the x5-E8000 does a pretty decent job inside the HeroBook despite its four cores being clocked at only 1.08GHz (the maximum burst speed is 2GHz) and having only 4GB of DDR3L-1600 RAM.

The HeroBook doesn't struggle with full-screen HD video streams or multiple Chrome browser tabs or image editing using the likes of Gimp. Only the rather laggardly transition from window to full screen YouTube playback betrays an inherent lack of grunt.

Bouncing between Chrome, Office and the Windows 10 email client, the HeroBook doesn't subjectively feel that much slower than the LapBook SE despite the fact that the Geekbench scores of 935 (single-core) and 2088 (multi-core) were only just over half those returned by the Gemini Lake machine.

Gaming of any serious nature is pretty much out of the question, but I suspect you already guessed that from those benchmark numbers.

Like the LapBook, the HeroBook has a handy bay in the underside for an M2 SSD of 512GB or less in capacity. Chuwi even bundles a handy little adapter so you can fit a 2242 card into the 2280-length slot.

Fitting a drive is the work of moments and not only gives the HeroBook a shot in the arm in terms of storage capacity but also, assuming you clone Windows onto the SSD, performance.

I've previously lauded Chuwi for the Linux-friendliness of its laptops, but sadly the HeroBook is an exception. Running both Ubuntu and Mint off a USB stick, I failed to get some pretty essential parts of the system working -- including the touchpad and the wi-fi radio.

I was all the more disappointed by this because the carton sticker -- the one with the wrong screen resolution on it -- has tick boxes for Windows and Linux, which suggests that at some point the HeroBook was intended to have an open-source OS option.

Connectivity is reasonable, but nothing more. There are two USB ports (one v3 and one v2), a fully-recessed MicroSD card slot, a mini-HDMI connector and a 3.5mm audio in/out jack. The AC power supply is proprietary rather than Type C, and is actually the same power supply supplied with the LapBook SE.

The Realtek wireless card only supports 2.4GHz 802.11n wi-fi, which is a bit disappointing. If you're used to 5GHz 802.11ac wi-fi, you'll notice the speed drop. This is the one area I think Chuwi could have spent a little extra to good effect. The associated Bluetooth radio worked just fine.

The HeroBook's standout feature is battery life. The combination of a 43.8Wh battery (Chuwi for some reason says it's a 38Wh unit) and a low-power chipset means that the YouTube video loop test that drained the LapBook SE in 6.5 hours ran for nearly 10 hours on the HeroBook.

To round this review out, the speakers are loud enough but very raucous and lacking in bass (a regular Chuwi failing), the 0.3MP webcam is a bargain-basement unit that's only good for the occasional Skype call and the power adapter has a two-prong international plug though being a rat-and-tail type with a detachable plug cable swapping in a UK lead is easy enough.

At the time of writing, the HeroBook is available for $199 from Amazon and £162 from Chuwi's official Ali Express store. For that price you simply can't go wrong if all you want is a basic notebook for office productivity. Just make sure you get one with the FHD IPS panel.

Hands on with the Chuwi Hi9 Plus: A high performing, low cost tablet for home and office