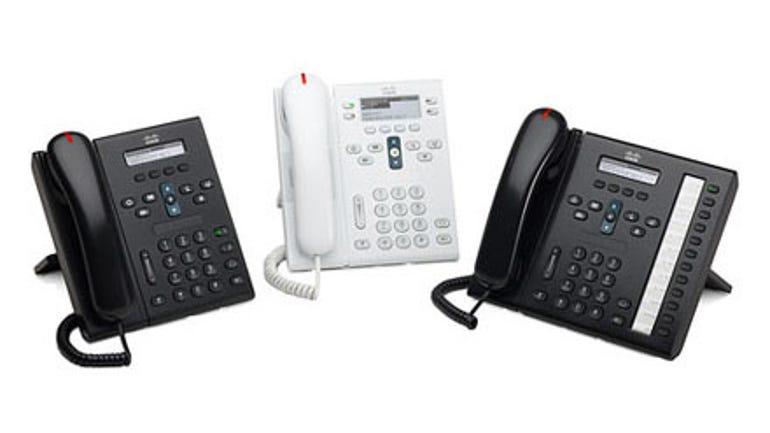 Long-term observers of Cisco Systems will know the networking giant (which has gradually diversified its range over the years into other fields) is not exactly known for its cheap prices, an issue that has fuelled the success of rivals such as Hewlett Packard's ProCurve division, telephony giant Avaya, and China's Huawei.

However, you get what you pay for, and few would complain to have Cisco throughout their organisation.

The company's 1 June release of the 6900 series of internet protocol desktop telephone handsets would appear to be an attempt by the company to provide a cheaper option for customers not willing to fork out the big dollars for thousands of the more expensive 7900 series phones Cisco has done so well with as IP telephony migrations have accelerated over the past few years (including a massive roll-out at Australia's own Westpac).

As Cisco's press release points out, the three models of the 6900 series are designed for "budget-constrained deployments". However, we believe them to be targeted at mainstream corporate use; Cisco has a couple of other lower-specced series — the 500 and 3900 series — which are aimed at small business and low-usage scenarios.

Cisco has not released Australian pricing for the new series, but the pricier 7900 models can be found online for anywhere between $290 and $750 each, according to a search of pricing aggregator site Shopping.com, depending on how high-end you want to go and how much of a discount can be had for bulk purchases. We would expect the 6900 series to sit somewhere below this range.

The 6900 series comes in three models: the 6921, 6941 and 6961, which support two, four and 12 lines respectively. Colours available are white and black, and the devices can be ordered in two different handset styles.

Cisco is billing the 6900 series as an "energy-efficient" product with support for a "deep sleep" option that lets it consume up to 50 per cent less power after hours compared to normal idle status during normal business hours. In addition, the devices are made from reground and recyclable plastics.

Otherwise, the feature set of the 6900 series is pretty much what you would expect from a cheaper Cisco option. It's a full-duplex speakerphone with LAN and PC Ethernet connections, and supports several dozen languages, an optional headset, some XML applications on the LCD screen, different ringtones, multiple codecs and so on.

Full specifications for the phones are available from Cisco's website.

Cisco isn't going to win any design awards for these phones; from a purely aesthetic perspective they look like bog-standard office models, and certainly stack up poorly when compared with the company's flashier 7900 range.

I've used 7900 phones, and they feel comfortably chunky in the hand. The usually dark grey colour scheme of the 7900 models evokes Cisco's recurrent green across its product range. This, combined with their large and often colourful LCD displays remind you that you're truly using a phone from the future; not just an old analog stalwart but a next-generation IP-capable tool that truly brings all the benefits associated with integration with corporate PCs and directories.

In comparison, the 6900 series looks cheap and plastic-y from the Cisco-supplied photos, with slimmer handsets and tiny, almost token LCD screens. Perhaps this is why Cisco is allowing customers to brand the handsets with their own logo; certainly the phones just won't look as flash on desks as the flagship 7900 series does.

We're not quite sure of the significance, but we noticed one online commentator taking Cisco to task for not including support for the G.722 protocol, which the 7900 series does support.

If you want to go Cisco for your corporate IP telephony network but can't afford a 7900 series phone for everyone, it's a no-brainer to check out the lower-specced 6900 series.