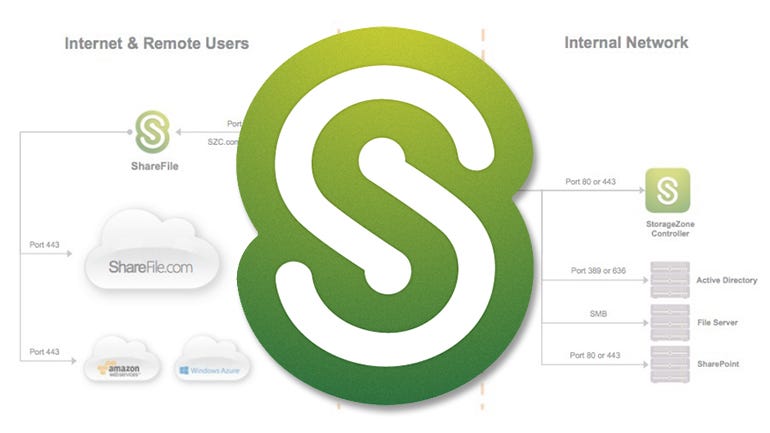 Cloud sync-and-share services like Box, Dropbox and OneDrive are popular with users for their convenience: you don't have to worry whether they have access to the same file share as you, or whether a large email attachment will bounce when you send it to someone you're collaborating with. Some IT departments remain reluctant, with concerns about security and compliance, despite the admin controls in online services. That's why Microsoft includes an on-premise version of OneDrive for Business in SharePoint, for example.

Citrix takes a different approach with ShareFile. Think of it as a managed file transfer service that brings together cloud sharing and sync with mirroring of storage from your servers and content stores, with controls and tracking tools to monitor what files are shared and who looks at them, with rights management to control what they can do. Instead of jumping from network shares straight to a cloud service, ShareFile lets you integrate multiple storage services and add share and sync to them.

Unlike consumer storage services that give you no control over where files are stored, ShareFile has different worldwide regions -- sign up in the UK, for example, and your documents won't be in a US cloud. If you're a global business, you can combine storage in the EU with US cloud storage for offices in North America -- and even on-premise storage that connects to ShareFile, with the data location dictated by your policies. There are also different storage locations for commercial and education customers.

To connect to your own storage repositories, you need to install the ShareFile storage zone software on a system with an SSL public certificate and an internet connection, behind a load balancer (there's also an IIS extension). It's not a complicated installation, but it will certainly take longer than simply signing up for a cloud service.

The storage zone connector can talk to SharePoint, network file shares and even some cloud services including Office 365, Box, Dropbox and Google Drive. That lets you consolidate the storage you get with multiple services into a single interface, and use your standard auditing and data leak protection tools (ShareFile integrates with Symantec, McAfee and Forcepoint DLP systems). You don't need to change security policies; ShareFile impersonates users on the network, so again, whatever granular access policies you have and whatever logging you do will carry on working. ShareFile also integrates with Active Directory (and, in future Azure AD), both for user access to files and folders, and to automatically populate email addresses for colleagues with whom you can share files.

On devices, Mac and Windows ShareFile software lets you sync all or some of the folders you have in ShareFile to your computer in the background, or access files only when you need them; you can also choose to selectively sync folders that other people have shared with you -- a feature only recently added to OneDrive, for example. Admin policies can limit what folders can be synced, or pre-populate folders to be synced -- to make sure everyone in the finance department is getting up-to-date copies of key shared files, for example.

There's also a Drive Mapper tool that turns ShareFile into a mapped drive in Windows Explorer. That's particularly useful if you use XenDesktop and XenApp for virtual desktops, because you get access to your files as soon as you log into your virtual desktop, without having to wait for anything to sync. It also means files aren't getting stored in images, or on the devices used to access virtual desktops.

Like OneDrive, ShareFile also integrates with Outlook, because email is still how many people want to share files. You can insert links to folders as well as specific files (so you can tell your team where to put the documents they're working on, which avoids a lot of work opening and resaving files), making ShareFile a handy replacement for FTP. You can also have local files you attach to email automatically shared via ShareFile all the time, only when you choose to, or any time they're over a certain size. Future versions will let you set specific rules for handling attachments (like moving the files you send to one person to ShareFile, but not the images of receipts you send to your accounts team).

One useful option lets you choose how many times someone can download the file you send them; you can also turn on download receipts. Unlike read receipts, which Outlook lets you block, download receipts come from ShareFile and let you track whether people have actually received the document you shared. (Citrix is also working on a version of the Outlook plugin that will work with Exchange directly, so you can use it in the Outlook web interface.)

Admins can also set policies, like forcing all attachments going outside the company domain to be automatically put on ShareFile. The built-in rights management lets you create policies like how long files can be available for, and whether they can be downloaded or only viewed online. However, rights-managed documents can only be read in a ShareFile viewer app that you have to download, not in Office (because ShareFile uses Seclore's rights management rather than the Azure service).

There's a web interface that gives you a dashboard for sharing files and tracking what you've already shared. Companies can brand this with their own logo, to remind users this is a work platform (using the separate admin web portal for configuring the service). If you don't want to download a file just to view it, or you're using a borrowed or unmanaged device where you don't want to leave a copy of a sensitive document, the website has content viewers for a reasonable range of file types. For Office documents, it uses Microsoft's Office Online editors, so you can see Word, Excel and PowerPoint files in (almost) full fidelity.

You can perform other tasks in the web interface, like filling in a form or sending it to someone else to be signed using the RightSignature service, as long as you have the document rights to do that. Those rights can be linked to where the document is stored, if you want to make sure that signed contracts stay in a particular storage repository. This lets you add an approval workflow to your documents, getting comments and signatures from a chain of people before releasing the document for example. RightSignature has a good set of tools, but as a recent Citrix acquisition the interface is very different from ShareFile.

ShareFile has good mobile support, with apps for Windows Phone 8.1, Windows 10 Mobile and BlackBerry as well as the usual iOS and Android. It uses platform features like Windows Hello, Continuum, Windows Information Protection (encryption containers) and MDM options, as well as Apple's encryption on iOS. On Android, Citrix has added its own security rather than relying on the platform: you can edit files inside the ShareFile mobile apps, which means the documents stay inside the encrypted ShareFile container.

If you lose a device, both the user and admin can send a remote wipe command to the app -- on both mobile device and PCs, although Citrix notes that's more reliable on mobile devices, so you'll want to use full drive encryption on PCs if sensitive documents are being shared.

ShareFile combines many of the advantages of cloud storage, FTP and internal document repositories. It doesn't have all the features of any of them (you don't get the deep integration of Office 365 or as many file viewers as Box, you can't have a password-free upload area for customers, and if you want SharePoint-style file check-in and checkout you need the more expensive Business plan, for example), but many businesses may see that as removing complexity. ShareFile is particularly well suited to businesses that need to consolidate different storage options. There are multiple different service tiers, so make sure you choose the one with the features you need.