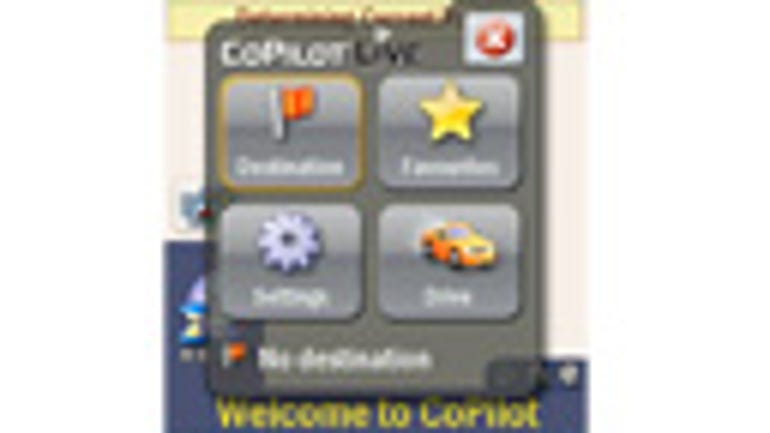 CoPilot is a leading standalone GPS navigation application — that is, it's a program that can be loaded onto a handheld or a mobile phone to add route-planning capability.

A market-leading position is all well and good, but it does pose problems when the next software upgrade comes around. With navigation software there are always map updates to consider, of course, but if you already have a strong route-planning engine and a usable interface, the danger is that meaningless feature bloat will creep in.

ALK has managed to improve an already impressive product without resorting to meaningless feature bloat, which is to be commended.

CoPilot's developer ALK Technologies has tackled this question head-on with CoPilot Live 7, which addresses outstanding user interface issues and adds a range of new features, both on and off the handheld device.

Installation and features
The software is supplied on a 'nested' flash memory card: a microSD card lodged in a miniSD adapter that's in turn fitted in an SD card adapter. Most currently available Windows Mobile devices will support one of these three formats.

The software self-installs and can be registered over the air, so you don't need to go anywhere near a PC to get up and running. It runs from a flash memory card, which leaves storage space on the device itself unaffected. As ever, the downside is that if you need to use another flash memory card for any reason, you won't be able to access CoPilot Live.

As well as the navigation software itself, a new element of CoPilot Live is a desktop companion. Called CoPilot Central, this is designed to meet several needs.

New Points of Interest (POIs) can be downloaded and added to CoPilot Live via CoPilot Central, a desktop companion.

CoPilot Central allows you to download data such as new Points of Interest (PoIs) and automatically downloads software updates, installing them to your handheld when it's synchronised with your PC. It can also extend CoPilot Live's reach with new maps downloaded over the internet and has a trip planning feature that allows you to pre-plan journeys and then download them to your mobile device.

We evaluated a pre-release version of CoPilot Live 7, and were not able to test CoPilot Central fully. However, the demo version we saw suggests that it should be straightforward to get to grips with.

ALK has taken a 'root and branch' approach to CoPilot Live 7, and there's a long list of new and updated features. Some are major changes while others are tweaks or refinements.

The user interface has been completely redesigned, and generally works well. There's a animated new 'preview' mode for running through trips before you set off. You can 'skin' the display with colour schemes — ALK calls these Themes, and there are plans for user-created schemes to be downloadable through CoPilot Central. There are many speed and usability improvements: for example, searching for PoIs has been improved, as has the address entry system. Route calculation seems faster too.

Performance
We tested CoPilot Live 7 over a period of several weeks, working with a number of near-final releases.

A new opening screen offers four frequently used options: Destination, Favourites, Settings and Drive. Select Destination and you're presented with options for choosing Points of Interest, entering an address, going to your work and home locations and so on; Favourites takes you to a pre-saved list of favourite destinations; Drive simply brings up the map screen showing your current location.

The map screen has its own Menu button, which brings up further options for entering destinations and managing the software generally.

A a small blue arrow at the bottom right of the map screen pulls up a submenu where you can choose what's displayed in an information row at the bottom of the map screen. Options include viewing your estimated time of arrival and distance to destination, current speed and distance to destination, altitude and heading, latitude and longitude, the next crossroads, the next major road, or the name of the current road. This menu disappears automatically after a few seconds if it's not used.

You won't see more than six tappable icons on-screen at once.

There's a limit to the amount you can cram into a small touch-screen and retain usability, so you'll never see more than six tappable icons at a time. The trade-off is that you may have to negotiate two or three screens to reach the one you need.

CoPilot Live 7 helps with destination entry by allowing you to choose between QWERTY and A-Z on-screen keyboards (as well as the AZERTY layout used in France and other European countries). The software uses predictive searching to narrow down the options as you go. With a full postcode to enter, you just type this, choose your road from a drop-down list, and then enter a house number. You can also go to the centre of a postcode or select the house number by choosing its location on a map if you aren't quite sure exactly where you need to end up.

Starting with a town, the predictive searching narrows down the options to a scrollable list that matches your entered text, whereupon you can enter a street name and finally a building number. It's all remarkably user friendly compared to some implementations, although we'd have liked the pick-lists to be larger than two rows (perhaps appearing as a transparent layer over the tappable keyboard with an active tappable area to the left or right?). If you really want to, you can use latitude and longitude to enter a destination.

CoPilot Live 7 offers TMC (Traffic Message Channel) over GPRS for a fee of 34.99 a year in the UK. Sadly we weren't able to fully test this as it consistently crashed even our most recent review sample.

As with other sat-nav systems, you can make settings for routing, such as choosing the quickest or shortest route, avoiding motorways and/or toll roads and/or congestion charge zones and such like. You can save settings as profiles, and then switch between these as required.

The new cycling mode proved a mixed bag. The mapping data is not aware of cycle lanes or shared pavements, special cycle routes across complex junctions or roundabouts, or cycle route across parks or other 'non-road' areas. It functions more on the basis of removing vehicle restrictions than on offering a truly cyclist-friendly navigation option. That we are still waiting to see, and it will require a considerable amount of data gathering on the part of map provider NAVTEQ.

Conclusion
The redesigned maps and revamped user interface in CoPilot Live 7 are worthy advances. The program also seems to calculate routes and detours faster than the previous version. This means that ALK has managed to update an already impressive product without simply adding unnecessary features, which is to be commended.