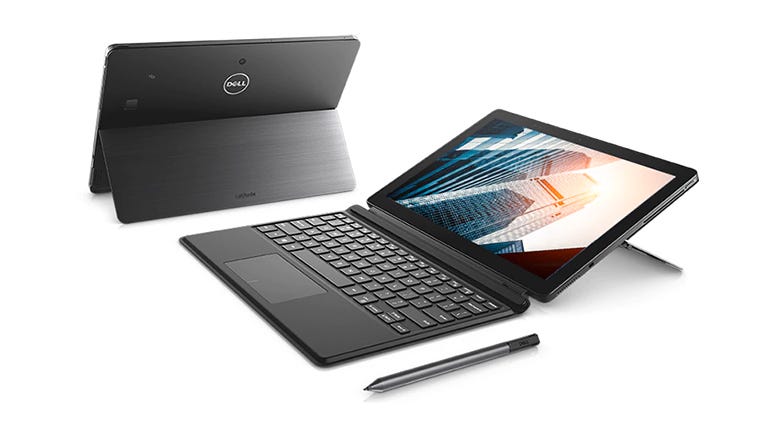 The Dell Latitude 5285 2-in-1 belongs to the growing army of Surface Pro clones, and is designed for business users who want a small, light two-piece Windows 10 system that's very capable and will travel well.

Given that the 2-in-1 mode of working requires both the tablet and a keyboard, it's irritating that Dell follows Microsoft to the point of selling these items separately. We'd be interested to know how many buyers go for a tablet-only purchase.

Assuming you've bought both components, you'll find that the 12.3-inch Latitude 5285 2-in-1 is neatly designed, with a robust docking system. The keyboard and tablet hitch together by magnets alone, but they're strong: at no time during the week-long test period did the two sections come apart unless I physically forced them to.

The keyboard section has a rough material backing that's visually distinctive and helps with grip when you're carrying the 2-in-1 system around. However, it could be prone to staining -- I managed to avoid spilling coffee on my desk during testing, but can imagine the mess such an accident would make of that material. The keyboard itself has lightly faux-leather finish which is soft to the touch, but again might be prone to damage -- I can imagine it getting roughed up by sharp objects, for example.

The upshot is that before too long the keyboard section could look as though it has been in the wars.

There are no such problems with the aluminium-clad tablet, which has a kickstand that's also very sturdy. The kickstand can be called into play in the usual way by pulling it out, or you can depress a couple of buttons that sit on the outer edge, where the tablet and keyboard join, causing the stand to pop out automatically.

The kickstand will hold the tablet at a range of angles up to 150 degrees -- to lay the tablet flat, of course, all you need to do is to put the kickstand away.

In use the keyboard is a little soft and spongy for my taste, although there's plenty of travel in the keys and a quiet but satisfying click as they're depressed.

The keyboard can be positioned either flat on the desk or at an angle, anchored in place by another strong magnet. In that angled position there is quite a lot of flex: I'm a pretty light-touch typist, yet even I found this very noticeable. Overall I typed at about 80 percent of full touch typing speed. The touchpad is efficient and responsive.

The 12.3-inch screen has a resolution of 1,920 by 1,280 pixels, delivering a relatively modest 188 pixels per inch (ppi). The 340-nit display is bright and sharp, and very responsive to touch, but sits in a rather wide bezel. This is necessary to prevent accidental screen taps when you're working in tablet mode, but also reduces the size of the screen that can be accommodated in the chassis.

There's an optional Active Pen, adding a further £85.79 (inc. VAT) to the cost, which adheres to the right side of the tablet using magnets. The pen is easily dislodged when the tablet is in a bag or a case, and so might be best carried separately in transit.

Having already mentioned the Dell XPS 13 2-in-1 as an alternative product, it's worth comparing dimensions and screen attributes.

The Latitude 5285 2-in-1 is a professional-grade laptop, and as such runs Windows 10 Pro. Security options include fingerprint reader (which sits on the back of the tablet next to the NFC touch point) and smartcard reader -- either contacted or NFC.

For connectivity there's a pair of USB-C ports, both of which support DisplayPort and charging, plus a full-size USB 3 port. The tablet also has a 3.5mm combo audio jack, a webcam on the top long edge (in landscape mode) plus MicroSD and SIM slots at the back, underneath the kickstand. The audio subsystem delivers decent sound quality -- both loud and bassy.

Dell says the four-cell 42Wh battery will last up to (a very precise) 12 hours 29 minutes. My anecdotal real-world testing suggests it should deliver all-day computing under workloads including writing, browsing over wi-fi and some media streaming. In one session under this regime, with the screen at about two-thirds brightness, I depleted the battery from a full charge to 65 percent in four hours.

There's plenty to like with the Dell Latitude 5285 2-in-1. The kickstand is sturdy, and the buttons that make it pop out automatically are neat and effective. The touchscreen is responsive, and battery life seems adequate for all-day usage. There are lots of configuration options too, and the ability to add mobile broadband into the mix will be welcome.

But the flexible keyboard is a concern, and the fact that it has to be bought separately from the tablet, increasing the overall price, seems unnecessary. Why not just bundle it?