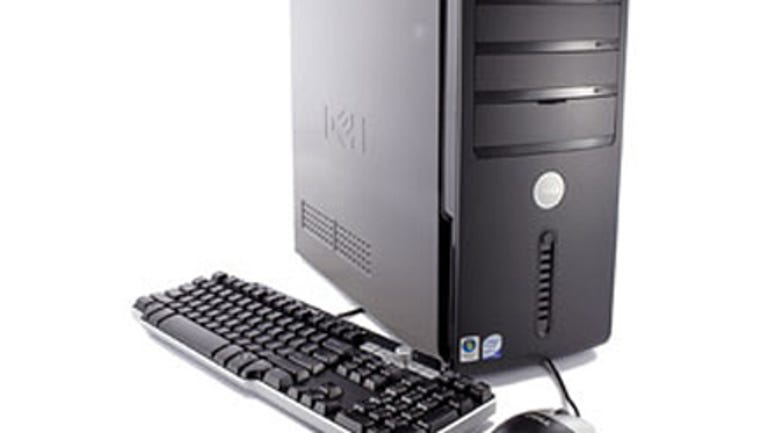 Dell claims its Vostro 410 is an energy efficient, high performance PC for small businesses. While Dell's efficiency claims seem to be hot air, the 410 is a sleek, zippy and good value PC.

Business desktops these days are tending towards a small sleek affair, designed to run office apps and more often than not prop up a monitor in a call centre or cubicle. Dell's Vostro range offers smaller desktops, but the Vostro 410 isn't one of them, being the big brother of the series.

How big? Well, our review unit had four hard drives, two DVD drives and still space for two more internal 3.5-inch drives and one 5.25-inch should you wish it. Along with the 512MB Nvidia GeForce 8800GT and the 802.11g PCI wireless card, there were two spare PCI and two PCIe 1x slots — so there is a pile of room for expansion in this desktop. Physically, it's 41.5cm high, 18.5cm wide and 43cm deep.

At first we couldn't find any ports on the front of the 410, just two glowing blue lights for power and HDD access, and face plates used to conceal the DVD drives which flip open when you press the eject button. However, pressing down on what looks like a drive slot reveals a comprehensive card reader, along with four USB ports and 3.5mm audio in/out jacks.

There are four more USB ports on the back of the system along with a gigabit Ethernet connection and six more audio jacks.

Overall it's a sleek design. The GeForce 8800GT has two DVI ports should you need to run multiple monitors, but as a legacy of a configurable product line there's also integrated Intel graphics on-board, offering an extra D-sub port. This is totally inactive until you boot the machine with the port already hooked up to a monitor, at which point if you still have the GeForce plugged in, the system advises you to switch over to the dedicated card and restart.

One annoying feature of the 410 we were sent is the inclusion of the Bluetooth wireless keyboard and mouse. Not only do you have to find batteries for wireless devices, you have to replace them when they run out. To add insult to injury, our wireless Bluetooth keyboard died mid keystroke, and despite changing the batteries we were unable to get it to reconnect to the system without rebooting. We don't recommend you pick this option if you plan to buy a Vostro 410 — plus you'll save yourself money by going with a standard USB mouse and keyboard.

The side panels on the case of the 410 are easy to remove (although doing so may void your warranty, depending on the agreement you hold) and the internal cables on our review unit were neatly arranged. The two large internal fans were also quiet after the initial blast given at boot time.

Features
You can expect a lot from the Vostro 410 in terms of raw performance — our review unit in particular came with an Intel Quad-Core Q6600 2.4GHz CPU (with 8MB of cache and a 1,066MHz front side bus). This is an oldie but a goody, and Dell allows you to customise the Vostro right up to the latest and greatest Q9550 at 2.83GHz. Whether or not your business can take advantage of more than a single core is a matter left for your tech department, although in most circumstances more than two are likely to be a waste.

Similarly the GeForce 8800GT will be overkill for most businesses, as will the lower level Radeon HD 3650 offered on the 410. Still, they do offer dual-DVI-out so you can run two monitors, and are both good value cards that open up a decent level of gaming and 3D application performance, as well as video acceleration to boot.

Our system came with Windows Vista Ultimate 32-bit with 2GB of RAM. Given that 32-bit Windows will only support just over 3GB of RAM, optimum performance for money would come from 3GB of RAM and a faster processor.

The 410 we received gave a Windows Vista Experience score of 5.4, which is quite a solid result. High commendation went to the processor and graphics with a score of 5.9. The RAM and HDD scored 5.4.

This means there isn't a lot the 410 can't handle; you should be able to do quick multitasking along with video and graphics applications without trouble. Those looking for better performance should look to a faster processor.

One thing to watch out for in the 410 is the factory pre-defined boot device order in the BIOS. Our 410 came with the external device set as the first boot option — which means that if you leave a USB stick in the machine, the system will simply demand you insert a valid system disk and won't boot. While this can be easily fixed by changing the boot order, it might stump less savvy users, and give more savvy users a moment of panic before they realise their HDD hasn't died.

The 410 we received came with four Western Digital 160GB SATA II drives, despite Dell's website saying you can only purchase three. Our system drive consisted of two 160GB drives in RAID 1 (which Dell calls "DataSafe") meaning that everything written to one drive is written to the other, or "mirrored" so if one drive physically fails, you still have a backup. On top of those two drives, Dell's website offers an extra 160GB drive on top of this, so who can tell where our fourth came from. The 410 also came with Norton Ghost, and we like that Dell designed the Vostro with ease of data protection in mind.

Pre-installed software was kept surprisingly light on the 410, with Roxio Easy Media Creator 9, Norton Ghost and the "Dell Support Centre", along with the requisite search engine deal. Yep, Google Desktop and Toolbar are pre-installed. While we were pleased to see the Google desktop feeding us global CNET news via Google News, we still consider it crapware.

The Dell Support Centre provides a range of shortcuts to online Dell resources, including drivers, Dell support, system information and manuals. While this software provides some useful shortcuts, many of them direct you to buy Dell services or hardware.

Energy Efficiency
Dell claims users of the Vostro 410 can "experience up to 47 [per cent] savings in annual energy costs". We were keen to test this, as this is a considerable saving.

Eventually, we came across this on Dell's website: "factory enabled Energy Smart software settings put your system into a low-energy sleep state after 15 minutes of inactivity." While it's not a bad idea to put your PC to sleep after 15 minutes of inactivity, it's not exactly a revolution in energy efficient technology (and as far as we recall it's actually the default Windows setting, unlike Lenovo, which has built an energy efficient PC at the cost of performance).

We can assume then that Dell's figure is based on a PC that is left on for a considerable amount of time, given it's the maximum saving that could be achieved from such a setting. If you find the sleep settings annoying you can disable them.

Verdict
While Dell's energy efficiency claims seem to be hot air, small businesses looking for a workhorse PC won't be disappointed by the 410. Its solid value for money, strong performance, and high customisability make it an excellent small office PC.