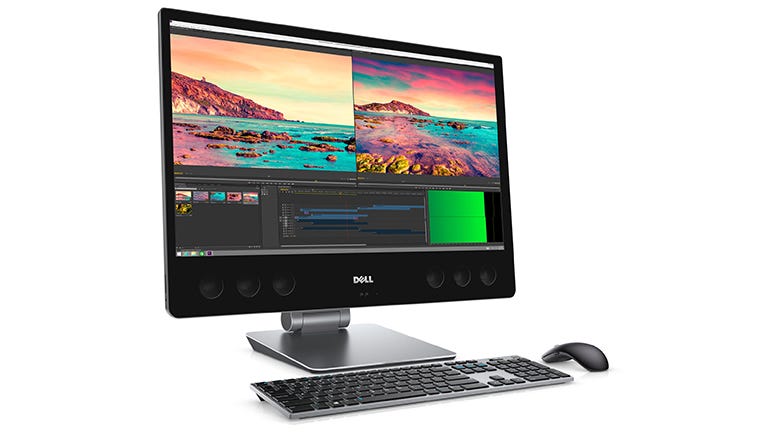 Dell's all-in-one Optiplex range is a good option if you're looking for an affordable desktop PC for office use, but there isn't a much breadth of features and performance on offer.Models we've reviewed in the past have been limited to 24-inch displays, with modestly-performing integrated graphics and hard drives that can't compete with high-end AIO systems such as Apple's iMac or HP's impressive Z1 Workstation G3.

That didn't change with the recent updates to the Optiplex range, and it's actually the company's XPS 27 range that's setting the pace for Dell's AIO products at the moment. Earlier versions of the XPS 27 were primarily aimed at home users, but -- in the US at least -- Dell's website lists the XPS 27 under the 'for work' category, and the performance on offer is certainly impressive enough to tackle a variety of professional-level graphics and multimedia applications.

The most obvious difference between the XPS 27 and the Optiplex is, of course, the larger 27-inch display, with the 2017 edition now stepping up to full 4K resolution (3,840 x 2,160 pixels and 163.2ppi) across the entire range. The screen is a delight-- bright and sharp, and with good contrast levels that make colours look vibrant and strong. Dell also states that the IPS display supports 100 percent of the Adobe RGB colour space, making it suitable for a range of graphics and design applications. The Apple iMac may still have an edge for video-editing work, however, thanks to its higher 5K resolution and support for the DCI-P3 colour space used in the film industry.

The 2017 model has been updated in other ways too. Clearly responding to Microsoft's Surface Studio, the XPS 27 includes a new articulating stand that allows you to tilt the screen right back and lower it onto the desk like a digital drawing-board. The screen on our review unit was touch-sensitive too, which could be useful for on-screen graphics and illustration work, or for a point-of-sale display.

The internal audio system has also been completely overhauled, now boasting no less than six separate speakers -- four woofers and two tweeters -- along with a pair of passive radiators to enhance bass output. Dell even aims a jab straight at the Apple iMac, claiming that the XPS 27 is "three times louder, 50% clearer, and with better bass". It's certainly good to hear a desktop system that can actually handle the bass line on Queen's Another One Bites The Dust, for example, and the XPS 27 will work well for presentations in the office as well as entertainment at home.

The XPS 27 also includes a 'quad array' of far-field microphones, and the bundled Waves audio software allows you to create voice profiles, such as 'noisy office' or 'private call' for webcam and softphone calls, as well as including a 10-band graphic equalizer for the speakers.

These features do add to the system's size and weight, though. In fact, at 17.3kg, the XPS 27 is almost twice the weight of Apple's iMac (9.54kg). But that really doesn't matter too much when you're dealing with a desktop PC that doesn't need to travel anywhere. That's a fact that Apple has never seemed to appreciate, and many users will happily trade the slimline profile of the iMac for the ability to adjust the height of the screen without having to sit the PC on top of a telephone directory. The XPS 27 is more upgradeable too, as you can remove the entire back panel to access the memory slots, as well as two spare drive bays.

The XPS 27 even beats Apple at its own game by including a pair of Thunderbolt 3 ports, while the iMac -- which is strongly rumoured to be receiving its own update soon -- is still using Thunderbolt 2. Other connectivity features include five USB 3.0 ports, HDMI-out, DisplayPort, Gigabit Ethernet and a 3.5mm audio socket. However, it's a shame that this update has lost the HDMI-in that was available on previous models.

Dell doesn't provide much in the way of build-to-order options, although UK users do get one configuration that isn't available in the US, with 32GB of RAM and a 1TB SSD. These upgrades bring the total price to £2,999 (inc. VAT, or £2,499.17 ex. VAT).

The iMac does have the advantage of a higher-resolution 5K display, but in terms of sheer bang-for-buck, the XPS 27 is clearly the stronger performer. It's ahead on raw processor performance for multi-processor-aware apps, with the XPS 27 achieving single-core and multi-core Geekbench 4 scores of 4,755 and 14,741 respectively, compared to 4,897 and 13,387 for the iMac. However, its real strength is graphics performance, with a score of 113.6fps when running the Cinebench R15 OpenGL benchmark, compared to 94.5fps for the iMac. It even outdoes HP's Xeon-powered Z1 Workstation G3, which managed 106.4fps.

It seems that, like Apple's iMac, the XPS 27 has now evolved from an attractively designed home PC into a professional-level graphics workstation. And while it might not have the elegant design of the iMac, but it's more than a match in terms of price and performance, with superior ergonomics and upgradeability that will appeal to creative users -- and their IT managers too.