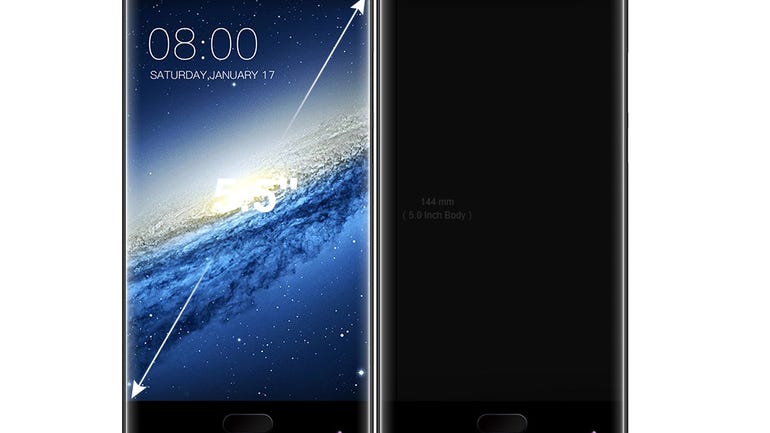 I was not looking forward to looking at the Doogee Mix phone. I reviewed the Doogee Shoot 2 and was underwhelmed by its performance and features.

The Mix, on the other hand, is completely different, right from the get go.

Doogee has managed to squeeze a full 5.5-inch Samsung Super AMOLED display screen with Gorilla Glass 5 from Corning into a bezel-less body, which is the same size as a 5-inch smartphone.

This gives a massive amount of screen real estate compared to other 5-inch phones I have tried.

It has 6GB of LPDDR4x RAM and has up to 128GB of internal storage on some models.

The standard phone is 4GB or 6GB RAM with 64GB storage.

The 3380mAh battery supports 5V 2A quick charging technology and will charge the battery to over half way after 30 minutes on charge.

There is a float gesture icon, which enables you to lock the screen and go into game mode, float video, music, or read mode.

For security, the phone has a fingerprint unlock feature in addition to the PIN.

Usefully, the fingerprint is recognised whichever way round you place it on the sensor.

The camera on the Doogee Mix is impressive. It has a 16MP and an 8MP 'assistant camera' to create a sense of depth to photos. It takes both video and panoramas.

There is the option to blur images, or you can use the camera in manual mode to change the ISO settings and increase the contrast and the light.

It has a DSLR bokeh effect to make an aesthetically pleasing, softened background. It also has a front-facing camera.

Interestingly, the front camera is at the bottom of the body, next to the fingerprint sensor, to maximize the display real estate.

You need to turn the phone upside down to get the camera at the top of the device and take better selfies.

There are selfie enhancement options such as face slimming and whitening, which work really well.

Another feature I love is the Doogee 'Smart Box' control.

This is a hidden, floating turntable display of apps used and options to lock the screen, access settings and float music, as well as other items in the toolbox.

It is accessed by swiping up from the bottom right hand corner of the screen.

This is great for single-handed use, if you are right handed.

Doogee, can we have the option to access this from the bottom left corner of the screen, too?

Not all of us are right handed!

Doogee also said there is the option to split the screen and perform tasks such as watching videos and using messaging. However, I could not find this feature to test this out.

The company does need to hire a native English speaker to tidy up the English on the UI.

Some of the English text -- especially in settings area -- does not scan well or make any sense in English.

Doogee has also provided a hard plastic case, screen protector, and screen cleaner cloth in the box -- a really great add-on that meant I could use the phone straight away without any risk of damaging the screen.

It also had another unusual package.

Doogee must have an off-the-wall sense of humour in its marketing team.

The package looks and feels like there is a condom inside.

However, when opening the package, the manufacturer has provided a really useful grip ring.

Stick it to the back of the phone using the sticky pad and slide your finger inside the metal ring.

You can then use your phone one-handed, with no risk of the phone slipping out of your hands.

It is a fabulous accessory that impressed me the most during my recent trip to Japan.

The packaging, however, certainly needs a more corporate style of branding.

All in all, I was impressed by the build quality and performance of this phone.

There are a few UI changes that need to be made.

Doogee needs to improve the English text readability in the UI. However, the Android 7.0 features show that the Doogee Mix is firmly positioning itself for the enterprise market.

This phone is going to do well once it gets the visibility and the adoption it deserves.

With a few tweaks, this will be a perfect device to capture market share for the brand.