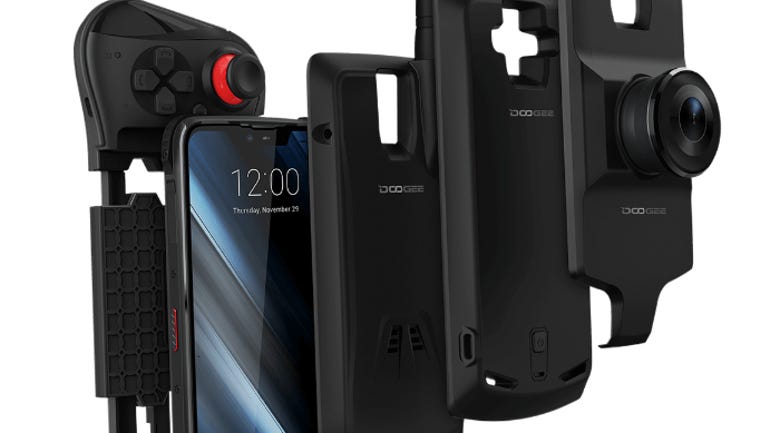 My, oh my, the latest phone from Doogee, the S90,  is huge. But this behemoth of a phone has several optional hardware modules which attach to the S90 magnetically, so you can customise the phone and get the device you really want to use.

The basic body of the S90 follows Doogee's other rugged styles. Its titanium alloy body has slightly sharp edges which feel uncomfortable in smaller hands. The body corners are soft compound rubber bumpers in case you drop the device.

The rugged S90 is rated at IP68 / IP69K which means that in addition to being dust proof, the phone will survive immersion in five feet deep water for up to two weeks.

Inside the box there is a USB type-C cable, an OTG cable, a headphone jack adapter which slots into the USB-C port, and a battery module.

This additional 5,000mAh battery attaches to the back of the phone magnetically, connects to the contact pins and increases the battery capacity to 10,050mAh.

Other optional modules to easily be attached to the phone.  Currently available is a night vision camera, and a digital walkie-talkie with 400-480MHz range. Doogee also plans to produce a speaker, 5G, projector, gamepad with joystick, and printer module

Inside the S90 there is a MediaTek Helio P60 octa-core processor and a Mali G72 MP3 graphics processor running at up to 800MHz.

It has 6Gb RAM and 128GB ROM storage expandable to 256Gb with a Micro SD card. The Android 8.1 OS has the same UI as earlier Doogee models.

I love the fact that the phone has NFC and wireless charging if you run out of 10,050mAh of battery.

Facial recognition is fast and will recognise me whether I wear my reading glasses or not.  It is not as accurate as the facial recognition function on the Xiaomi Mi 8 Lite I looked at in February, but it works in a variety of light levels and environments.

As in previous Doogee models like the S80 and the S70 phones, there is a really useful ToolBag set of icons like a compass, gradient checker, and picture hanging tool.

One of the phone's issues is that if one of the modules is connected to the phone, then you will get significant errors when using the compass due to the beefy magnet in the phone.  Also, if the backup battery is connected then OTG will no longer work.

There is also a customisable red-edged button on the left hand side of the phone. This can be configured to send an SOS, switch to game mode, start sound recording, switch on the flashlight, take a screenshot, or open the water camera.

If you enable the SOS function, pressing the custom button for five seconds will activate a call for help. It will send a customised text message, including your longitude and latitude as well as the town or area you are in.

You can also add up to three contacts who will be alerted when the SOS button is pressed. This feature is really useful for anyone who treks, goes into the wild, or works alone. You never know when you might need help.

I was really impressed with the night vision camera module. This module has a proper Sony 131 degree super wide angle lens which rapidly adjusts the aperture to let as much light as possible into the lens. Doogee says that the night vision gives a 12x photosensitive boost to images. 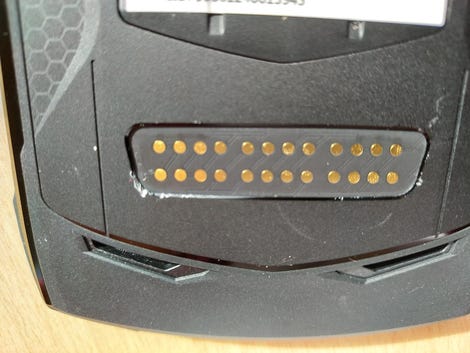 I noticed that the edge of the contacts became scuffed. I accidently dropped the phone once and the extra battery pinged off which must have scratched the contact edge as it disconnected.

If you are precious about keeping your device pristine, then this might bother you. If so, you will need to be careful. This is a rugged phone, so I think it should show signs of surviving any impact.

Aside from this niggle – and the fact the phone will be too big, and scratchy if you have small hands – I love this phone. I love the extra modules, the flexibility they offer, and I really like the night camera module, and the idea of a speaker module in future.

The Doogee S90 – with its optional magnetic modules can become every phone you have ever wanted – with durability thrown in for good measure.

Join Discussion for: Hands on with the Doogee S90: A superb ultra-customisable...