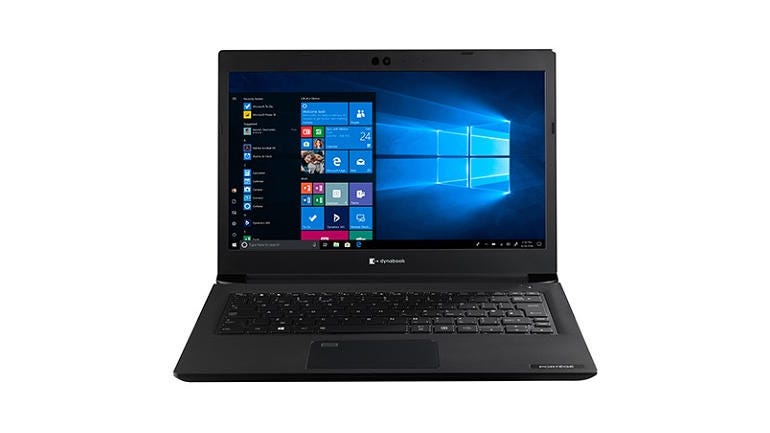 We have reviewed two Dynabook laptops since Toshiba's PC business was rebranded at the beginning of 2019: the Tecra A50 and the Portégé X30. Now we're looking at another 13.3-inch model in the Portégé range -- the A30.

Like the X30, this line has been going for a few years -- the E in the latest lineup indicates a new refresh, if a rather conservative one. This will be seen by some as a good thing -- corporate buyers will know roughly what to expect, for example, making new purchases a relatively safe bet. However, there are some design issues here that could do with a more serious makeover.

The Portégé A30-E is a small-format, lightweight laptop that's designed for working on the move. It has several useful features, including an Ethernet port, a MicroSD card reader and SmartCard slot.

Like other Portégé laptops, the chassis is relatively flimsy: there's a lot of flex in the lid, and I wouldn't want to carry this laptop anywhere without a good-quality protective sleeve. The keyboard surround has a linear patterning that looks rather attractive, but after just a couple of days' use I found it became smeared with fingerprints and collected dust. It wasn't very easy to clean.

Heavy-handed typists will also note that the keyboard is quite flexible. Although MIL-STD-810 testing gives some confidence that this laptop is durable, I do wonder how well it would survive a drop down a flight of stairs, for example.

The Portégé A30-E is compact and lightweight, with a desktop footprint of 316mm by 227mm and starting at 1.2kg. It's a little thick at 19.9mm, but does taper towards the front. The thickness is primarily in the base, which, as mentioned, is deep enough to accommodate a full-size FJ-45 Ethernet connector.

Dynabook could have shaved a few millimetres off the footprint by going for narrower screen bezels. As things stand, the side bezels are around 10mm, with the top and bottom at around 20mm. The overall effect is rather dated. At least the top bezel has room for a webcam with Windows Hello support, although it would have been good to see a privacy cover here.

The 13.3-inch screen has a matte finish, which will appeal to those who find reflective screens distracting, or need to work outdoors. Maximum brightness is 470 nits, which should be enough for outdoor work, and I found it was fine to use in my office at the 50% level suggested for working on battery power. The FHD (1,920 x 1,080 pixel) resolution delivers enough detail to have two documents open side by side, although of course the small screen size does make this something of a challenge. Dynabook evidently feels that the move away from Toshiba has yet to fully register with customers, as the older brand name appears on the desktop wallpaper alongside the new.

If you need a laptop from which to deliver presentations with video content, you might want to look for a screen with more vibrant colours. Sound quality is also below par for flashy presentations.

The stereo speakers output through two grilles on the underside of the chassis, at the front. They are elevated from the desk, but nonetheless send the bulk of their sound downwards rather than up and out. Top volume is loud enough, but audio quality is very poor -- tinny and shrill, with barely any bass tones. A great shame.

The keyboard has a light touch, and is fine for fast touch-typing, but as noted earlier, there is a fair bit of flex here and heavy-handed typists will notice this. The typing sound is quietly thunky, which is fine for working in a quiet space. The keys are large, with a wide double-height Enter key that's easy to find.

There is no AccuPoint stick here, as seen on some other Portégé models. My review sample -- like all of the available preconfigured variants -- lacked a touch screen, so the touchpad is the only means of cursor movement. I found it responsive enough, and the embedded buttons were effective too. The fingerprint reader is integrated with the touchpad.

I was sent the top-end off-the-shelf model to review, the Portégé A30-E-14Q. Here's how it compares to the three other preconfigured A30-E variants:

The array of ports and connectors should be enough for mobile workers to manage their everyday tasks. On the right side of the chassis there is a SmartCard reader, a pair of USB 3.1 ports and a full size RJ-45 Ethernet port. There is also a small white LED that remains lit when the laptop is in use, and flashes orange if you close the lid without shutting down.

On the left edge is the round-pin power connector, a USB-C port with DisplayPort, a full size HDMI port, a 3.5mm headset jack and a MicroSD card reader.

Under my usual battery testing regime, working with the screen set at the recommended 50% brightness into a writing app with music streaming and some video watching, the battery depleted by 66% over one five-hour period. This suggests that Dynabook's  claimed 8 hours 45 minutes for my Core i7 version of this laptop is achievable.

Two of the other three models (the Portégé A30-E-14N and Portégé A30-E-143) run on a Core i5 processor and have a suggested battery life of 14 hours 15 minutes. Without one to test I can't make a judgement on whether that is achievable.

The Portégé A30-E has a 'bare bones' feel about it. There is no AccuPoint, no lens cover for the camera, lacklustre speakers and a somewhat flimsy chassis. The general design is workaday, with relatively broad screen bezels, the lid is rather too flexible, and there is flex in the keyboard too. All-day battery life is certainly possible, but this may not be enough for Dynabook's newest laptop to keep itself at the top of business buyers' lists, especially if they look around at what else they might get for the money.