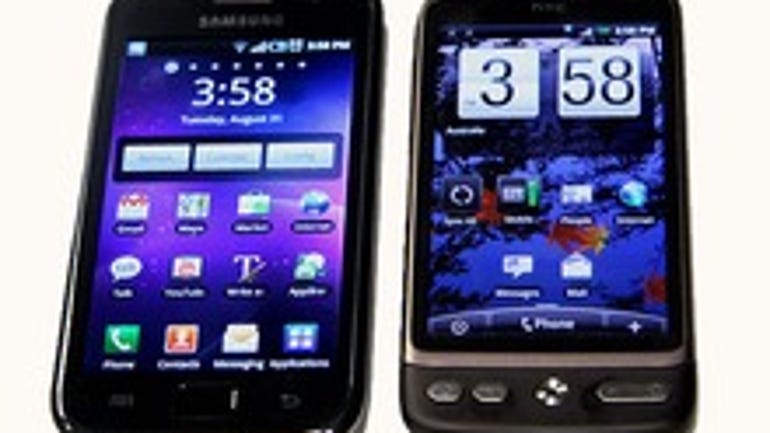 E-TEN’s handhelds tend to pack in the features both in terms of hardware and software, and there's no doubt that the company tries hard to add value to its devices. With the Glofiish X500+ a key part of the added value comes in three features we've notseen in combination before: GPS, Windows Mobile 6 Professional and a VGA-resolution display. Add in the other extras, and this is a pretty special handheld.

Design
The Glofiish X500+ cannot be described as sleek: it's rather tall at 113mm, although its width (59.5mm) and thickness (15.5mm) are on a par with small-format handhelds such as Orange’s SPV M700. At 146g there's about 50 percent more weight to carry than you’d have with a typical mobile phone. But these premiums may be worth paying given the amount that's going on inside this device.

The screen occupies the central area of the fascia, with shortcut buttons at both the top and the bottom. Beneath the screen are Call and End buttons, plus two softmenu buttons and an offset rectangular navigation key. Above the screen are two further buttons: one takes you to the Today screen, while the other fires up the integrated GPS receiver. Status lights are also located here, as is the speaker.

The touch-screen display measures 2.8in. from corner to corner. This is the same size as the Orange SPV M700's screen, although the extra height of the Glofiish X500+ gives the illusion that the display is slightly smaller. The screen delivers a full VGA (480 by 640 pixel) resolution: both Windows Mobile 5 and Windows Mobile 6 are capable of supporting VGA screens, but devices offering it are rare.

The only three that spring to mind are T-Mobile’s recent oversized two-piece Ameo Orange’s SPV M5000, which we reviewed towards the tail end of 2005 (and variants of that device from other operators), and Fujitsu Siemens’ Pocket LOOX 720, an unconnected handheld we looked at back in September 2004.

Several buttons and connectors are ranged around the edge of the Glofiish X500+. On the left are volume buttons and a button that on a short press starts the voice control software and on a longer press allows you to make a voice recording. A headset jack is also here.

The right edge houses the on/off switch and a camera control button. On teh bottom is a microSD card slot and mini-USB connector for power and PC connection. The stylus, a lightweight extending type, lives in a housing at the bottom right of the device, at the back.

The Glofiish X500+ comes with an AC adapter, a USB cable for PC connection, a stereo headset, a spare stylus, a wallet-style protective case, a screen protector and aprinted 'getting-started' guide.

Features
The Glofiish X500+ is a quad-band GSM device with GPRS/EDGE support plus integrated Bluetooth (2.0) and Wi-Fi (802.11b/g) connectivity.

As a Windows Mobile 6 Professional, handheld the Glofiish X500+ can take advantage of the full range of enterprise data-sharing and synchronisation capabilities offered by Microsoft's Exchange Server 2007. The device itself also includes a significant number of enhancements over Windows Mobile 5. For more detail, read our review of Windows Mobile 6.

E-TEN provides 128MB of ROM and 64MB of RAM. After a hard reset, our review sample had a shade under 30MB of free storage space. You can augment this with microSD cards; the slot, as already noted, is easily accessible on the bottom edge of the device.

The chances are, though, that you will need this slot for your navigation software, and extra storage space will be limited to whatever is not occupied by software and map data. If you need more space, you'll have to do some card swapping.

The SiRFstar III GPS receiver can be used for one task even if no third-party navigation software is present. An application called Location SMS (which we have seen before on E-TEN handhelds) can be used to send your current latitude and longitude within an SMS message. There are several pre-defined text segments that can be edited, or you can write your own SMS message from scratch.

Another preinstalled application that E-TEN believes will suit the business community is a business card scanner. This can be used in conjunction with the integrated 2-megapixel camera to capture information from business cards and import it into Contacts.

The theory is sound, and there's a definite appeal to the idea of being able to deal with business cards soon after a meeting, perhaps while travelling, rather than having to wait until you're back in the office. However, during testing we found the software to be rather unreliable. In some cases it captured data perfectly well, but in others we found ourselves having to edit almost every field; in these cases it would have been just as quick to enter information directly into Contacts using the Glofiish X500+’s soft keyboard.

The main camera is also, of course, suitable for shooting stills and video. It has autofocus and a macro mode, and E-TEN includes some utilities for editing images. The device also includes an FM radio. The antenna is housed in the provided stereo headset, so you have to use this if you want to listen to the radio. The 2.5mm connector means that you’ll need a converter if you want to listen to music played by Windows Media Player through a headset with a 3.5mm jack.

Other applications include a backup/restore utility and an alternative Today screen called M-Desk that provides a tabbed, icon-based route into applications on the device. Meanwhile Birthday Reminder helps you keep track of anniversaries independently of Calendar. It will issue reminders a set number of days before each event.

Performance & battery life
E-TEN claims the Glofiish X500+ will deliver 5-6 hours of talk, 12-14 hours of Pocket PC usage and 5-7 hours of GPS operation. Our usual battery life test, in which we set the device to play music continuously from a full battery charge with the screen forced to stay on, delivered an above-average 8 hours and 28 minutes of music.

The Glofiish X500+'s  high-resolution screen delivers very clear text, making it a pleasure to browse the web and read documents on this device.

Conclusion
The Glofiish X500+ isn't the most attractive of handhelds, but it packs in a huge range of features. Some of the software extras may have limited appeal to business users, but the core Windows Mobile 6 Professional bundle has plenty to offer mobile professionals.