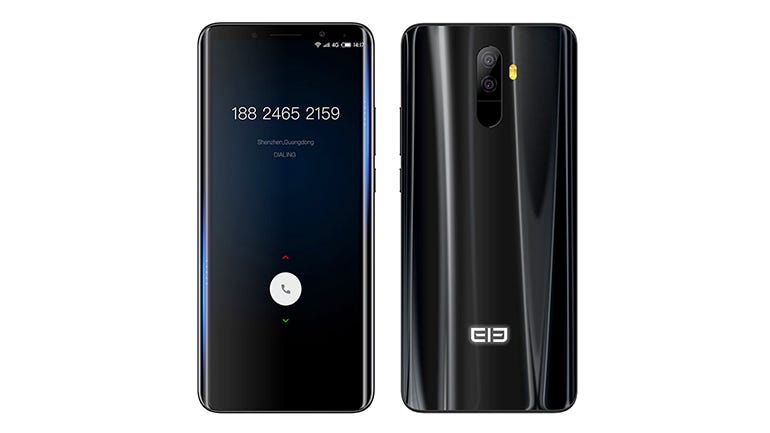 The Elephone U Pro is a blatant Samsung Galaxy S8/S9 copy from a little-known Chinese manufacturer. It can be yours for around £325 from the usual Chinese importers; our review unit was supplied by GearBest.

Stylistically Elephone has hit a six -- or if you are reading this in the US, a home run. The rounded corners and curved screen are straight from the Samsung playbook -- granted it's a blatant rip-off, but if Kia made a car that looked like a Jaguar people would still buy it.

Build quality matches the looks. The frame is a metal alloy affair and the screen is covered in a sheet of Gorilla Glass 5. The volume and power buttons on the right are reassuringly solid. Usefully, a double-tap of the latter in standby launches the camera. Super-slim bezels, a Type-C USB connector and a funky translucent back complete what's a very attractive, if derivative, package.

Don't be fooled by the twin speaker grills at the bottom: Only one of them actually houses a speaker, which has the capacity to generate an impressive amount of volume, although it does distort a bit when turned up to the maximum.

Wireless connectivity is taken care of via dual-band 802.11n wi-fi, Bluetooth 5.0, an FM radio and all the 4G LTE bands you could wish for. For those of you who still make those quaint phone calls, the U Pro's noise cancellation worked well and call quality was generally good.

The U Pro isn't all style but no substance. Running the show is a Qualcomm Snapdragon 660 chipset built around an octa-core 2.2GHz CPU with 6GB of RAM. The mere fact that Elephone has entered into the various licence agreements that Qualcomm insists upon is an indication that it has ambitions beyond being just another member of the MediaTek brigade.

Storage hasn't been skimped on either, with 128GB built-in and the option to house either a second SIM or a MicroSD card next to the primary SIM. It's worth saying here that Samsung only offers 4GB/64GB on the entry-level S9. Granted the U Pro isn't as powerful as the S9, but it can still return AnTuTu scores of around 120,000 and PCMark scores of 5,400 which are more than good enough for me.

The combination of the efficient Snapdragon 660 chipset and a 3,350mAh battery means the U Pro can push through the best part of two days on a charge. It also supports wireless charging.

The display is the showpiece though. The 5.99-inch 2,160-by-1,080 (18:9) BOE-sourced AMOLED panel is a cracker. Bright, colourful and sharp as a tack, it could easily grace a phone costing twice as much. I know proper flagships boast 2,960-by-1,440 displays, but to the naked eye the difference is almost indiscernible.

Another plus point is the close-to-stock implementation of Android 8.0. It makes for a fluid and weirdness-free user interface -- something I'm all in favour of.

Elephone has added a few touches of its own such as a hidden app bar that can be swiped out from either edge of the screen, gesture controls and options to change the content and style of the navigation bar. All these can be turned off if regarded as more of a hindrance than a help.

When it comes to cameras, the U Pro seems to have most bases covered with dual 13MP cameras on the back and an 8MP unit on the front. According to Elephone one of the rear lenses captures RGB colour information while the second is a monochrome sensor for capturing brightness and detail. This is all in the cause of the fake bokeh effects (sharp subject, blurred background) that seem to be the rage at the moment.

The rear camera assembly can capture 2160p video at 30fps, the front 1080p at the same frame rate. Sadly these technical specifications flatter to deceive.

Performance of the main camera is nothing to write home about: it's technically accomplished on paper and comes loaded with filters, effects and manual overrides and boasts software coding by imaging specialist ArcSoft, but even in good light images are rather dull and colourless. And the lower the ambient light the worse things get. In poor light the results can be downright abysmal. Third-party camera apps did nothing to improve matters. As for the ersatz bokeh effects, sometimes these work, sometimes the results are rather questionable. At least the selfie-snapper on the front works well.

Other downsides? Well, despite the Qualcomm chipset, the U Pro is still not 'certified' by Google so the NFC implementation won't support Google Pay and the Netflix app from the Play Store wouldn't launch (although the generic app from the Netflix site worked just fine).

On a couple of occasions my review unit rebooted itself while streaming music over a Bluetooth connection. I've no idea why. You may come across other similar bugs, although these were the only ones I found.

The fingerprint scanner doesn't work quite as reliably as on better-known devices. Yes the phone always unlocked, but sometimes only after two or three attempts. I ended up reverting to using a PIN code for security. Apparently a Face Unlock feature will arrive at some point via OTA.

Lastly -- and this is by no means an issue unique to Elephone -- the U Pro lacks a 3.5mm audio jack, although you do get a Type-C audio adapter in the box. And it has no waterproofing whatsoever.

Is the Elephone U Pro worth a punt? I would say a qualified 'yes'. The fantastic 6-inch screen, large battery, voluminous and expandable storage, and good looks certainly make this handset a desirable bit of kit. On the other hand there are one or two rough edges and the main camera performance, in particular, is rather poor. And don't forget you can pick up a Moto G6 Plus here in the UK for around £260 which, if not quite as powerful or as funky, could be a safer bet.

Phone apps aren't secretly listening to your calls: But what they do is still 'alarming'
Researchers find that apps aren't using a phone's mic but they are watching what you do on the screen.

Who's reading your Gmail? Not us, says Google, and we vet 3rd-party apps that do
Google says it doesn't get paid for giving third-party apps access to Gmail and checks them thoroughly.

Android P: New features, release date, and everything you need to know
Google's latest mobile operating system is here -- and we have all the details currently available.

Rising smartphone prices prompt buyers to keep phones longer, buy refurbished devices (TechRepublic)
As the price of flagship smartphones climbs past $1,000, consumers are keeping their phones for longer periods of time and buy more refurbished devices, according to a new report from IDC.