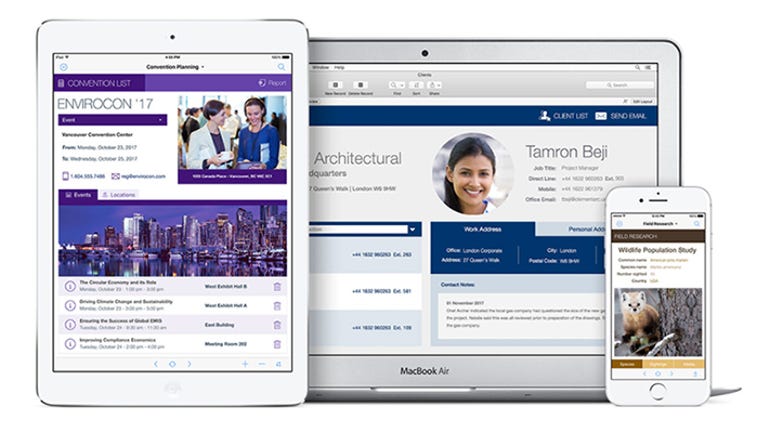 FileMaker Pro, and the FileMaker Server component that makes databases available over a network, has a new version for Windows and Mac with a handful of improvements and new features that fill in some previously annoying gaps -- especially for integrating with online services.

FileMaker is as much a database app development tool as a database engine, and you can create complex layouts with triggers, conditions and scripts for multiple screen sizes and device types, nesting one object inside another to get exactly the on-screen arrangement you wanted. Managing those layouts is easier with the new Layout Objects palette in layout mode; this searchable navigation list makes it easier to navigate layouts with a lot of nested elements. Working with group of objects is easier in this version too; previously, if you wanted to make changes to an object inside a group you had to ungroup those objects first, which would delete any actions that applied to the whole group. Once you'd made your changes, you had to group the objects and recreate the actions and hope that you didn't need to change anything again. Now you can make changes without having to ungroup objects first.

FileMaker lets you arrange objects in layers, which gives you a lot of options for layout. Now you can hide objects on layers above, or above and below the object you want to work with from the Layout Objects list, making it easier to edit the right object without having to move things out of the way.

When you're designing layouts for FileMaker Go, the iOS tool that turns a FileMaker database into a mobile app, this release lets you write scripts that let you control animations and transitions in your layout. It also lets you have more control over signatures in your app. Previously, if you used the iOS signature capture API this took over the whole screen; now you can show the signature field as an embedded box on your layout or as an overlay window, to fit in better with your design.

FileMaker Go apps already supported iBeacons, but you couldn't automatically look for and respond to new beacons as a user walked around; you either had to run a script or have the user click a button periodically. Now you can add a step to your script that listens for new beacons coming into range. This new region monitoring also supports geofencing, either at beacon or GPS scale, so if you build an app for a specific location like a store or warehouse, it won't keep listening for beacons when the device is elsewhere.

FileMaker WebDirect is the browser-based equivalent of Go, for using FileMaker apps on non-iOS devices; previously neither could handle PDFs embedded into records, but those are now displayed correctly.

You can also have more FileMaker WebDirect users using a database at the same time. It's often thought of as a solution for small departments with ten or twenty users, but now it's more like 500.

Last year FileMaker added a cloud version hosted on AWS instead of relying on FileMaker-specific hosting services, which made it easier for smaller businesses to expose their database apps to mobile devices, and is also useful for enterprises looking for a devtest environment. Although the cloud version won't get updated to the FileMaker 15 engine until later this year, when it does you'll be able to handle rather more than 500 users per app.

Perhaps the biggest new feature for app developers is that FileMaker finally lets you connect to REST APIs (before the options were only ODBC, XDBC, JavaScript objects and a PHP API). Now you can parse standard JSON data objects from just about any API, using a set of cURL primitives and the automation engine in the FileMaker script workspace.

The FileMaker team has worked specifically with Tableau to create a Web Data Connector to make it easy to bring in charts and other data visualisations from your Tableau system. Instead of using Swagger to help developers discover APIs from within FileMaker, web connectors for FileMaker rely on services building FileMaker-specific versions of discovery and management tools, but many developers will likely already know the APIs they want to to use.

Signing into the apps you create with FileMaker has worked against Active Directory and Apple's Open Directory for a long time. Now you can use Oauth identity providers -- Azure Active Directory, Amazon and Google initially, with other providers likely in future.

There are new security options to protect data, including encryption at rest and in motion, with a set of functions to encrypt and decrypt text and container data using AES and to retrieve binary hash values or keys Hash Message Authentication Codes (HMAC). An icon in the corner of the screen shows whether the connection is secure (a green padlock if the SSL certificate can be verified, an orange warning if not). Instead of relying on users to check, you can use that connection information in scripts, for example blocking action buttons if they do something for which you want the user to be on a secure connection.

Windows users will be glad to see that FileMaker 16 finally has multiple document windows that open as separate windows you can switch between or see side by side. Mac users have had this for a long time and it's nice to see the Windows version act more like real Windows software.

Years before anyone came up with the term 'citizen developer', FileMaker allowed you to create business database applications, and in recent years it's added features to let you turn databases into mobile apps. The interface is starting to look a little long in the tooth (especially on Windows) but it's still a good combination of approachability for power users and capability for professional developers. This release has a solid mix of developer productivity improvements, new mobile tools and better integration with other online services. The ability to sign in to apps you build in FileMaker with Azure AD is a major bonus, making FileMaker a useful tool far beyond the Apple market.