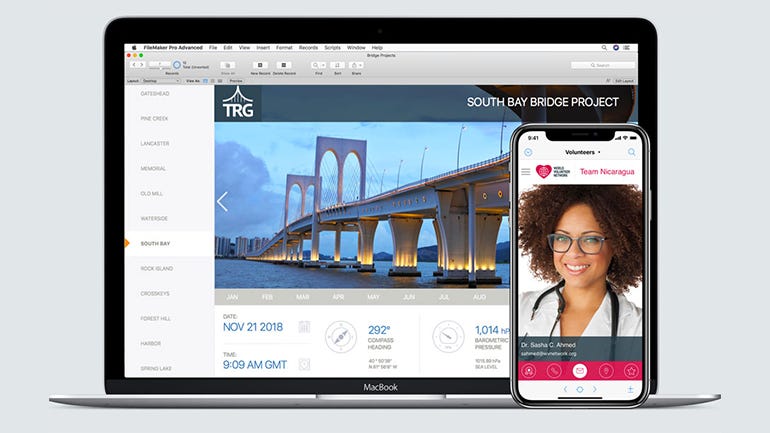 There are plenty of 'low code' tools aimed at people who aren't professional developers but who need to create apps that are essentially databases with mobile interfaces for collecting and viewing data, filling out forms and connecting to plug-and-play services to add more features. FileMaker has become a particularly accessible way of doing this (primarily for iOS, but with a slightly lagging set of options for Android and web), and the latest release, FileMaker 17, is aimed very much at this audience.

Together with FileMaker Go for iOS and FileMaker WebDirect for running web apps, these components make up the FileMaker Platform. Licences are now based on the number of users, although you can buy licences by the number of connections if you have a lot of mobile and web users.

Thankfully, simplification doesn't mean taking away features; it means improving the UI, adding more options for mobile development and making it easier to get started. FileMaker has always come with starter apps, but as the platform became more powerful, these apps got a little too complicated to provide a good learning experience. In this release they're back to being both useful and easy to understand; you can create a blank app with a single table and layout, convert a spreadsheet to a database, or open one or six blank starter apps or 16 sample apps (ranging from a task-management list to an address book to a simple event-management system). The latter are basic but functional apps that include scripts as well as the fields, layouts and relational database setup, but they're also easy enough for beginners to understand and customise.

Whether you start with a blank table, a starter app or an existing FileMaker app, the new Add-on Tables feature is a nice way to add standard components for common data types like notes fields, addresses, attachments and action items. You add them like any other portal field, inserting an Add-on Table and then picking which type of table you want. The table is created at the right size for the fields, and is added into the relationship graph for the database to connect to existing tables, so it works straight away. This is a handy time saver, but it has the potential to become a much bigger gallery than the eleven initial examples, and to work with the increasingly standardised data formats for business objects produced by services like Dynamics and Salesforce (invoices and company details, for example).

FileMaker 17 finally makes it easy to add master-detail layouts to your database where you can see a list of records plus the fields for the current record. This is a very common view, especially for mobile apps, that used to be far too complicated to set up. But when you drag to lay a portal out on the canvas you can just choose to show records from the current table, with a scrolling list for navigation. If you're adding this to an existing layout you still have to grab all of the items already laid out to move them out of the way by hand to make space; the new group selection option makes that easier, but it would be nice to see a 'make space' tool that would move fields, labels and other objects for you.

There are also some very welcome improvements to the layout tools. The palette inspector that gives you quick access to properties, styles and settings for objects used to float over the layout canvas; it now docks on the right-hand side so you never have to move it out of the way.

Adding a FileMaker Go layout to a database turns it into an app you can use on iOS, and the version 17 release adds drag and drop, plus auto-complete as users type and keyboard shortcuts. FileMaker already supports iPad hardware like the Pencil as well as the camera and the GPS, so you can create a FileMaker app that can scan barcodes, capture signatures, record locations, and embed photos and videos. The existing iBeacon support is now more powerful; you can create custom notifications that will appear as the user approaches a geofence, prompting them to start using the app.

For more sophisticated developers, there's a new GetSensorData function that can capture the full set of sensor data from iOS devices using the gyroscope, accelerometer and Hall effect sensor. You can use everything from the battery status to step count, air pressure, speed and compass heading -- useful if you're using the app to do a survey, or giving users navigation directions in an app.

There are a number of improvements for admins, including a new admin console for FileMaker Server. But the bigger news is the way you can now use FileMaker apps as web services without complicated PHP or XML programming, as long as you have a FileMaker Server licence (or use FileMaker Cloud). The REST API introduced in FileMaker 16 for using a FileMaker database as a data source that you can both read and update is now out of preview and feature-complete.

The biggest feature that was missing in the preview of the Data API was scripting, but that's now supported using automation on the server; it can also now insert data into the container fields that FileMaker uses to store binary objects like embedded video. The licence covers unlimited data transfer to a FileMaker database, and 2GB of data per user per month from the server (shared among all users); you can buy more outbound data in 2GB blocks if you're serving a lot of images or video in your apps.

It's still early days (and there are niggles like dates seemingly only returning in US formats), but the Data API could move FileMaker from being an isolated platform where you only keep the data that you use inside the apps you build in FileMaker, and closer to being a data store that you can integrate and orchestrate alongside other databases and applications such as Power BI, Tableau or a CMS, like WordPress (there's already a data connector for Tableau, but as it uses standard JSON other connectors won't be hard to build). That does still require JSON programming, but also means that other low-code platforms like Salesforce Lightning or Microsoft PowerApps could add FileMaker as a data source to give less-advanced developers a way of connecting to it alongside other services.

Annual releases of FileMaker are helping to keep this long-lived tool useful and up to date with new features, and more comprehensive modernisation continues to keep it relevant. On the other hand, since FileMaker runs on both Mac and Windows, it would be nice to see the Windows installer updated so that it didn't insist on installing Apple Bonjour, multiple .NET frameworks and shortcuts to a quick-access toolbar that hasn't been in Windows since Windows 7; the installation experience still makes FileMaker feel very long in the tooth.

Comparison chart: Enterprise collaboration tools (Tech Pro Research)
Online collaboration has become a critical driver in business success--but which tool is the best fit for your organization's needs? This side-by-side comparison chart will give you a snapshot view of what the major contenders have to offer.