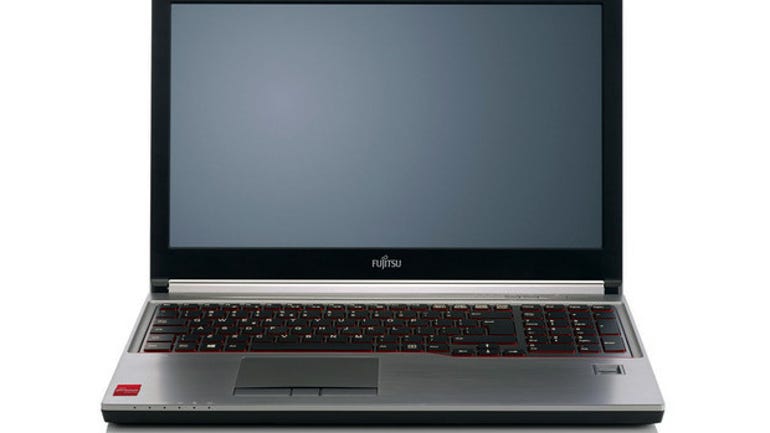 Fujitsu's elegant 15.6-inch Celsius H730 mobile workstation was announced at the end of last year, but has relatively recently become available with the company's innovative PalmSecure palm-vein authentication system, which was present on our review unit.

Equipped with a high-end Core i7 processor, 8GB of RAM, Nvdia Quadro graphics, a 256GB SSD, and a modular drive bay, this is a flexible high-performance notebook that's also potentially very secure. That's good news for power users — such as designers, engineers, scientists and financial analysts — who routinely work with sensitive data.

As far as looks as concerned, the Celsius H730 echoes the LifeBook E-Line systems that debuted in 2013, featuring a smart light-grey livery with red accents along the front of the lid, between the keyboard and the brushed-aluminium wrist-rest, and on the body of the island-style keys. The only jarring note is the inevitable collection of stickers (Intel, nVidia, Fujitsu and Bluetooth Smart Ready) peppering the right side of the wrist-rest.

This is a well-specified 15.6-inch notebook, so it packs significant bulk and weight, measuring 38cm wide by 25.7cm deep by 2.48-3.19cm thick and weighing 2.75kg. Having said that, the well-executed design makes it look and feel relatively slim and elegant.

The screen is a key component for a mobile workstation aimed at demanding power users, and the matte-coated full-HD (1,920 by 1,080 pixels, 141ppi) LED-backlit unit delivers decent brightness, contrast and viewing angles. Many users will attach a second monitor via the DisplayPort connector on the left-hand side, which can support up to 2,560 by 1,600 pixels. There's no touchscreen option for the Celsius H730, which comes with the more keyboard-mouse-oriented Windows 7 Professional — although Windows 8.1 Pro is optionally available if you really must have Modern apps and the Start screen.

The keyboard, which is not backlit, is an island-style unit with 104 keys, including a separate numeric keypad and a row of half-height function keys above the number row (with Home, End, PgUp and PgDn at the right-hand end), plus single-function inverted-T cursor keys between the QWERTY keys and the numeric keypad. If you like a very responsive keyboard with a lot of key travel, you may find this one a little passive, but we found it easy enough to type on at speed. The large three-button multitouch touchpad is comfortable to use, too.

There's a trio of buttons between the keyboard and the screen, including Fujitsu's characteristic 'eco' button that puts the system into a strict power-saving mode — disabling the optical drive (if present), wi-fi, Bluetooth, and Ethernet, dimming the screen and throttling CPU performance. The other two buttons are for power on/off and wireless on/off.

The left-hand side carries, from back to front, the power input, an RJ-45 Ethernet port, the aforementioned DisplayPort, three USB 3.0 ports, an SD card reader, a smartcard reader plus microphone and headset jacks. The right-hand side has a USB 2.0 port and a modular bay housing, in our review system, an optical drive. This can optionally accommodate a second battery or a Blu-ray writer, but there's no sign of Fujitsu's intriguing Bay Projector that we saw on the Lifebook E743. The underside of the Celsuis H730 has a docking connector for the optional port replicator.

Our Celsius H730 review unit ran on Intel's 2.7/3.7GHz quad-core Core i7-4800MQ processor with 8GB of DDR3 RAM, expandable to 32GB via 4 SODIMM slots. There is a long list of Core i5 and Core i7 processor options if this particular model doesn't fit the bill.

As you'd expect from a mobile workstation, there's plenty of choice when it comes to the graphics subsystem. Nvidia's Optimus technology allows the system to automatically switch between the processor's integrated HD Graphics 4600 and a discrete 2GB Nvidia Quadro K1100M with 384 CUDA cores. This is the mid-range discrete GPU option, sitting between the K510M (192 CUDA cores) and the K2100M (576 CUDA cores).

PalmSecure
A key feature on our review unit was its PalmSecure palm-vein authentication system, which uses a near-infrared scanner to capture the unique vein pattern in the user's palm and match it to a previously enrolled signature. There are several advantages to this biometric technology over conventional fingerprint scanning: it's contactless and hygienic (you hover your palm a few inches above the scanner during recognition); it's extremely difficult, if not impossible, to fake (unlike some fingerprint scanners); and the device only works when blood (more specifically, deoxygenated haemoglobin) is actively flowing through the veins.

We had no trouble setting up and using PalmSecure, which is enabled via Fujitsu's Workplace Protect security software — where you can also set up authentication via smartcard and face recognition, create a password safe for your various login details, and configure an encrypted container for your most sensitive data.

On booting the PalmSecure-enabled system, there's a few seconds' delay during which Windows requests that you "Please wait, while checking the status of the necessary services...", before the PalmSecure dialogue pops up. You also need to hold your palm steadily over the 2cm-square scanner in the correct orientation (you're prompted which way to move if you're doing it wrong). Even so, it's more convenient than remembering and typing in a password — and, of course, much more secure.

The Celsius H730's Windows Experience Index (WEI) under Windows 7 Professional is 7.0 out of 7.9. The WEI corresponds to the lowest-scoring subsystem, which in this case is a tie between the two graphics scores:

That's not to say that the Nvidia Quadro K1100M's 2D and 3D performance is in any way shabby — rather, it points up the excellence of the processor (7.6), memory (7.7) and primary hard disk (a perfect 7.9) component cores.

We also ran the demanding Cinebench R15 benchmark, which puts the Celsius H730's CPU and GPU (OpenGL) performance into perspective:

Although battery life may not be foremost in the minds of prospective Celsius H730 buyers, given its size and weight, Fujitsu claims an impressive nine hours for the six-cell primary battery, rising to 14 hours if you add the optional modular bay battery. If you're planning to use this mobile workstation on battery power for any length of time, we advise getting the modular option, because our estimates (based on power consumption measurements rather than rundown tests) suggest that the primary battery's nine-hour rating is on the optimistic side.

If you're seeking a smart-looking mobile workstation with plenty of CPU, GPU, storage and connectivity options, Fujitsu's Celsius H730 is a worthy contender. It's not cheap, but given the spec you shouldn't expect it to be. And since you're likely to be working with sensitive data on a machine like this, the PalmSecure palm-vein authentication looks like a valuable addition.