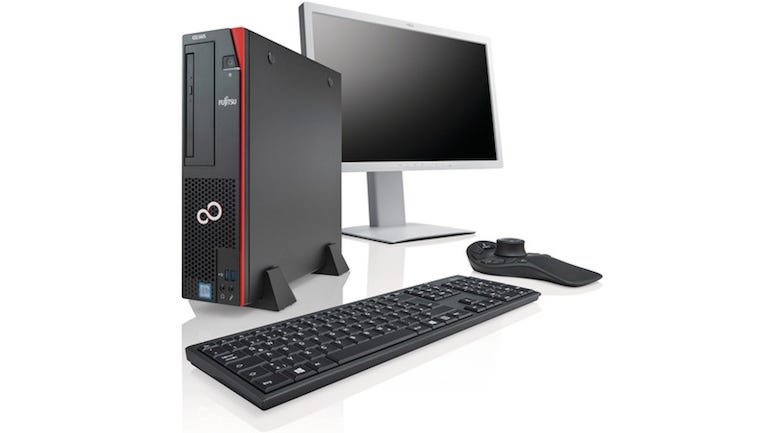 Professional workstations tend to be big and noisy, because they need to accommodate specialist graphics cards and lots of hard disk storage. With its newest Celsius models, however, Fujitsu is looking to buck that trend by squeezing very capable entry-level workstations into a much smaller space, and doing so without making too many compromises in terms of features and performance.

Two versions of the new Celsius workstation are available: the £890 (ex. VAT) small-form-factor Celsius J550 reviewed here, and a larger mini-tower, the Celsius W550. Built in Germany to a very high standard, the two systems are identical in terms of motherboard, processor and memory choices -- the W550 simply provides room to add extra storage. The mini-tower also offers more flexibility when it comes to GPU cards with a 500W power supply available as an option for those wanting to max out the options inside the bigger chassis.

For our review, however, we concentrated on the Celsius J550, a single-socket workstation designed around Intel's latest 6th-generation (Skylake) processors that's small and quiet enough to sit unobtrusively next to a monitor.

Power on this model is handled by a single 180W supply, and a great deal of attention has been paid to airflow to optimise cooling inside the very limited chassis volume. With just 10 litres of space to play with this is very important, so there are fans either side of the processor heatsink and on many of the optional GPU adapters as well as in the PSU. The casing can still get quite warm, but ours was never noticeably hot and proved very quiet, emitting little fan noise even when pushed hard.

Setup and maintenance are straightforward, the top of the case lifting off for ease of access with lots of Fujitsu's trademark bright green plastic tabs to point you in the right direction and clever design features to help cram as much inside as possible. The compartment holding the optical drive and SD-card reader, for example, can be swung up to gain access both to the disk located underneath and an M.2 SSD connector on the motherboard.

Our review unit was fitted with a quad-core Intel Core i7-6700 processor, clocked at 3.4GHz, but customers can specify a range of Core i3/i5 alternatives or a CPU from the Xeon E3-1200 v5 family. We had 8GB of DDR4 RAM, although with four DIMM slots to play with this can be expanded to a more than adequate 64GB if required, with dual-channel capabilities built in.

Choosing the right processor for your particular applications can be tricky, especially when it comes to the graphics side of the equation. Core processors, for example, have an integrated Intel HD Graphics 530 GPU, capable of driving up to three monitors via one DVI-D and two DisplayPort interfaces on the Fujitsu motherboard.

Capable as Intel's much-enhanced GPU is, the HD Graphics 530 is no match for even a basic plug-in adapter like the Nvidia Quadro K620 fitted to the review workstation. When tested for OpenGL performance with the Cinebench R15 benchmark, for example, the integrated HD Graphics 530 managed just 43fps compared to 78fps for the Quadro K620.

The Quadro is a much better fit with 2D/3D workstation applications, and most customers will opt for one of these or one of the AMD FirePro alternatives. Moreover, Fujitsu has designed a clever riser card to enable the J550 chassis to accommodate full-height GPU boards. Power requirements still limit the choice that can be fitted, but you can still go as high as Nvidia's mid-range Quadro K2200 with 4GB of video memory and 640 processing cores.

It's also worth noting that, where a plug-in GPU is used with an Intel Core processor, the integrated HD Graphics 530 controller can either be disabled or used in tandem, allowing additional monitors to be connected at no extra cost.

Some of the Xeon E3-1200 v5 processors also have this integrated graphics option, but some don't and you really do need to consider carefully the combination of CPU and GPU required before making any other configuration decisions.

In terms of connectivity you'll find most of what's needed built in, with a Gigabit network interface as standard along with eight USB 3.0 interfaces -- two at the front and six at the back. Compromises have been made elsewhere though, and with space very much at a premium inside the Celsius J550 storage options are somewhat limited.

The review workstation had a slimline DVD writer installed, with a useful multi-format flash card reader in the bay underneath. It also had a conventional 1TB SATA hard disk for the operating system and data storage, which might have been an acceptable configuration a couple of years ago but these days most buyers will be looking for an SSD -- at least as far as the boot disk is concerned. With that in mind, we'd expect most buyers to opt for either a SATA SSD or an M.2 module (PCIe and SATA are both supported) to fit in the Fujitsu motherboard slot, to further boost performance.

Large capacity (6TB) magnetic drives are also available, but if storage is important the larger Celsius W660 is, arguably, a better option and still relatively compact. Or, perhaps, you could consider using network storage for volume archiving and local flash for performance when working on particular projects.

What is it good for?

So is there really a market for this kind of entry-level workstation? Fujitsu certainly thinks there is -- as does Dell, which recently launched similar products.

Of course, there are plenty of buyers who need the performance of a high-end workstation to get the most out of their applications. But for the majority running 2D/3D modelling and other less demanding programs, that's overkill in terms of both specs and cost.

A small single-socket workstation like the £890 (ex. VAT) Celsius J550 may have its limitations, but it's more than capable of handling a wide range of CAD/CAM, video editing and other applications that would struggle when hosted on a conventional PC. Consider, too, the surge in self-service data analytics and visualisation products (such as Tableau and TIBCO Spotfire) which could, similarly, be made a lot more effective simply by running them on a workstation rather than an ordinary desktop PC or notebook.