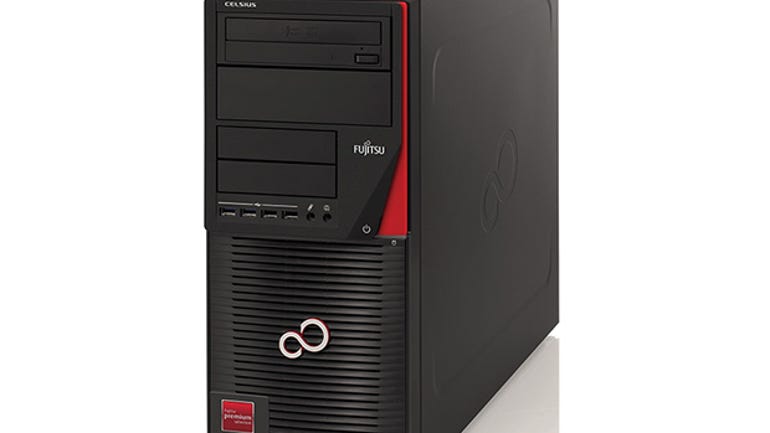 Think of a professional workstation and you're likely to conjure up images of a big black box crammed full of multicore processors, expensive graphics cards and masses of storage. But that's not always the case. Workstations can come in various shapes, sizes and formats with Fujitsu's Xeon E3-1271 v3, an unremarkable but capable little system aimed squarely at buyers with limited requirements and a budget to match.</p><p> More than just a PC</p><p> At first glance you could be forgiven for thinking the Celsius W530 little more than a mini-tower PC, housed in a nondescript floor-standing chassis with a single power supply and removable side panel for access. Furthermore, the processor socket on the motherboard inside can take an Intel Core i7 just like a high-end desktop, although our review system came instead with a quad-core <a href=" http:="" ark.intel.com="" products="" 80908="" intel-xeon-processor-e3-1271-v3-8m-cache-3_60-ghz"="">Xeon E3-1271 v3, the 'v3' at the end indicating that it's based on Intel's 22nm Haswell architecture, which was slowly added to the Xeon E3-1200 family throughout 2013/14.

A very capable processor with Hyper-Threading support and a clock speed of 3.6GHz (4GHz in Turbo Boost mode), the Xeon E3 is a sturdy yet affordable workhorse that can be accompanied by up to 32GB of memory, spread across four DIMM slots. Our review unit had just 8GB, which is enough to get started. It's easy to add more -- although, disappointingly, you can only specify DDR3 here: faster, more energy efficient, DDR4 RAM is currently only available on systems based on the latest Xeon E5 processor technology. Still, it's a decent combination that's well up to the task of running CAD/CAM and digital media applications alongside Microsoft Office and other productivity tools.

Fujitsu has also opted to fit a fast 128GB SSD boot disk on this model, with a 1TB magnetic SATA drive for data storage. Plus there's room to add a couple more disks if needed and plenty of USB ports for external device attachment, four of which are USB 3.0. A Gigabit Ethernet port provides the necessary network attachment, and there's a DVD writer. Completing the workstation spec, there's a useful multi-format SD card reader.

OK it's not quite complete, there's a graphics card too as, unlike the Core i7, the Xeon E3 processor employed here doesn't have an integrated video controller. However, that's all to the good as Fujitsu has opted to pair the Xeon E3 with a Quadro K2200 from Nvidia, which turns out to be exactly what's needed to lift the Celsius W530 from fast desktop PC into the workstation realm.

Although far from the quickest member of the Quadro family, the single-slot K2200 is well specified with 4GB of dedicated video memory and a fast processor delivering 640 CUDA cores. That's good enough for most of the applications likely to be run on the W530, and the K2200 can also drive up to three monitors with two DisplayPort sockets plus a DVI-I connector on the back.

Fujitsu didn't have a suitable monitor to send us, so we took the opportunity to pair the Celsius workstation with an LG 34UM95, billed as "the world's first 34in UltraWide QHD (Quad HD) monitor". This too turned out to be a really good match and exactly the kind of screen that buyers of the W530 should be looking at (literally).

On first unboxing, the LG monitor looked a little weird, but teamed to the Nvidia K2200 we were immediately presented with a QHD desktop which, with a resolution of 3440 by 1440 pixels, proved to be a very usable space. Indeed it's the equivalent of a couple of standard full-HD monitors side by side, but without the hassle and cabling required for two separate screens.

We connected using a DisplayPort lead that gave excellent results, although the monitor also has a couple of HDMI connectors and two Thunderbolt ports for Mac users. You can even attach two computers to the one display and have them use half the screen each. There are built-in speakers, plus a neat little joystick to adjust the display settings.

Selling for around £570 (ex. VAT), the LG 34UM95 seems expensive, but not when compared to the cost of buying two smaller screens. As well as the large desktop, it features a bright and very precise display that's just what's needed on a workstation. We found it a delight to use and a wrench to let go once we'd finished testing.

Talking of which the Quadro-equipped W530 acquitted itself well in the Cinebench R15 benchmark, racking up an OpenGL score of 121.7fps (frames per second). Admittedly that's not as fast as some workstations we've tested, such as Dell's Precision T7810 with its Quadro K5200, but it's more than sufficient for the type of applications the Celsius W530 is likely to be faced with.

Other things we liked about the Celsius W530 were the lack of fan noise from the desk-side unit, and also the supplied USB keyboard and mouse, which were a step above the entry-level peripherals more usually included. We would have preferred a wireless setup, but that's an easy and affordable option to add later.

Note also that the price includes Windows Professional, Fujitsu providing a Windows 8.1 license but routinely downgrading to Windows 7 for delivery. You also get a load of trial applications, which can be annoying but are easily removed.

Overall the Celsius W730 proved more than capable of handling a variety of common CAD/CAM and digital content creation applications. Animation professionals and game designers may prefer something more capable and costly, but if you're looking for an affordable workstation that can double up as a desktop PC when needed, the Celsius W530 is an excellent choice.