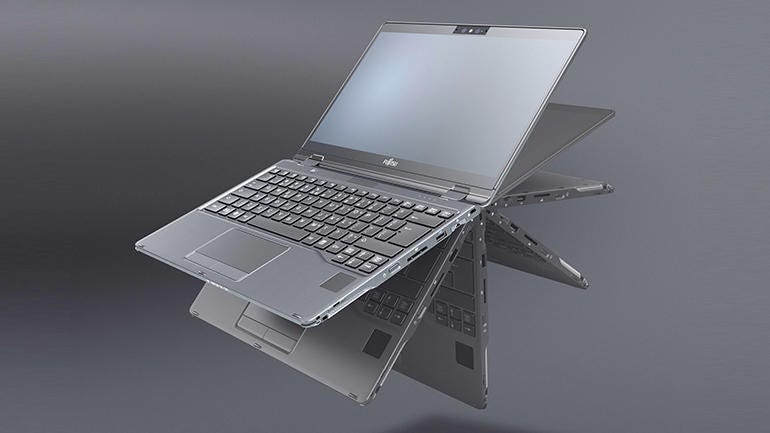 Fujitsu has an extensive range of Tablet Lifebook laptops, and the U939X is a 13.3-inch 360-degree convertible model. It's small and light, but packs in a lot of high-end features, including a stylus that sits in a housing on the base and Fujitsu's PalmSecure biometric authentication. Indeed, according to Fujitsu the U939X is "the world's lightest business convertible in its class".

The U939X measure a compact 309mm wide by 214.8mm deep by 16.9mm thick, into which Fujitsu has squeezed in an Ethernet port, a housing for a rechargeable stylus and a touchscreen. With a starting weight of "approximately 1kg" depending on configuration, it slipped easily into my smallest backpack, and I didn't notice the weight at all.

You might want to consider a protective sleeve for this laptop, though, as I found it easy to flex both the wrist rest and the screen. Although Fujitsu says the Tablet Lifebook U939X is MIL-STD-810G compliant, I'd want to carry it around in a sturdy sleeve just to be on the safe side -- after all, you never know when your backpack is going to hit the ground with a 'thunk'.

The Tablet Lifebook U939X is available in two colour versions. I was sent the black option, which will probably sit easiest in an office environment. There is also a red version with a crimson lid, base and hinges. This variant will definitely stand out in a crowd.

The hinge mechanism is sturdy enough to hold the lid in any orientation from standard laptop mode through tent and presentation (screen-outwards) orientations. It's disappointing that the keys don't lock down in full tablet mode. Such a light laptop lends itself to being held in one hand for tablet use, and the keys are vulnerable to heavy pressure under these conditions.

The keyboard is very light touch with a little resistance on the downstroke and a good spring back up. It's a little clicky, but not obtrusively so. The Enter key is wide and double height, making for a large target, and the cursor keys, while not quite full size, are generous. A keyboard backlight with two intensities is toggled via the Fn key-spacebar combination.

Above the Fn key row to the left is a small button that acts as a shortcut to Microsoft's Windows Ink. This can be configured for long and short press functions in the Fujitsu Function Manager app, which can also be used to make a few other settings, such as setting the fan in quiet or 'normal' mode, toggling the touchscreen, and viewing detailed battery status information.

There is a camera in the centre of the area above the Fn key row, a 5MP unit designed for use as a rear-facing camera when working in tablet mode. There's also an HD webcam with Windows Hello support in the customary above-screen location.

There's a bank of four status LEDs above the Fn key row to the right, with a further set on the front edge of the laptop, visible when the lid is closed.

The wrist rest houses a smallish touchpad with separate physical buttons, and a Fujitsu PalmSecure biometric sensor that reads palm vein patterns rather than the more usual fingerprints.

The screen is a 13.3-inch FHD (1,920 x 1,080 pixel) touchscreen with a matte, anti-glare finish. The short bezels are quite narrow, and Fujitsu has done what it can to minimise the chassis size. Indeed, when working in tablet mode, those thin short-edge bezels might become a bit irritating if they allow accidental screen touches.

The stylus lives in a housing on the front right of the chassis and charges when docked. It's relatively thin, and some people might find it a little fiddly to grip, but long enough to use like a pen. The on-device housing makes it less likely to be lost, and more likely to be ready for use when needed.

Fujitsu provides plenty of connectivity. It doesn't match Dynabook (the newly rebranded Toshiba) in its continued support for VGA (most recently seen in the Tecra A50), but it does run to a standard Ethernet port, which is fitted into a space on the right edge of the Tablet Lifebook U939X that's just 10mm high via a clever pop-out mechanism. This mechanism feels a little flimsy, but many will prefer it over having to carry a dongle or dock.

Fujitsu also finds room on this edge for a full sized SD card reader, a USB 3.0 port, the on/off switch and a SIM caddy for the optional LTE mobile broadband. This edge also houses the stylus dock (or 'garage', as Fujitsu likes to call it). There's a little lanyard loop for tethering the stylus.

On the left edge is a round-pin power input, a pair of USB-C slots, both with Thunderbolt 3 support. There is also a full-size HDMI port, a second USB 3.0 port and a 3.5mm headset jack. Towards the front is a SmartCard reader.

The speaker grilles are towards the front of each side -- a good location given that this laptop can be used in a range of orientations. Sound output could be better, though. Top volume is too quiet to reach across a table of more than four or five people, and bass tones are poor. This is disappointing on a laptop with so many other impressive features.

Fujitsu claims 15 hours of life from the Lifebook U939X's battery. I used it for my everyday computing workload (writing into web apps with multiple Chrome windows open, often via two browser instances, streaming music frequently and video occasionally) with screen brightness at the recommended 40% level (which was fine for my work environment). In a typical five-hour work session the battery depleted to 55%.

Obviously more compute-heavy workloads and/or higher screen brightness will deplete the battery quicker. Still, most knowledge workers should get through a typical working day using this laptop away from a source of mains power.

Fujitsu's Tablet Lifebook U939X is a lovely little convertible laptop. Its compact size and light weight make it very portable, and the chargeable stylus in its own housing is a big plus. The array of ports and connectors is very impressive, and Fujitsu has even provided two webcams. Downsides? Flexibility in the screen and wrist-rest, and disappointing speakers.

Fujitsu Stylistic Q738, First Take: A 2-in-1 detachable for the mobile professional

Installing five flavours of Linux on my new laptop