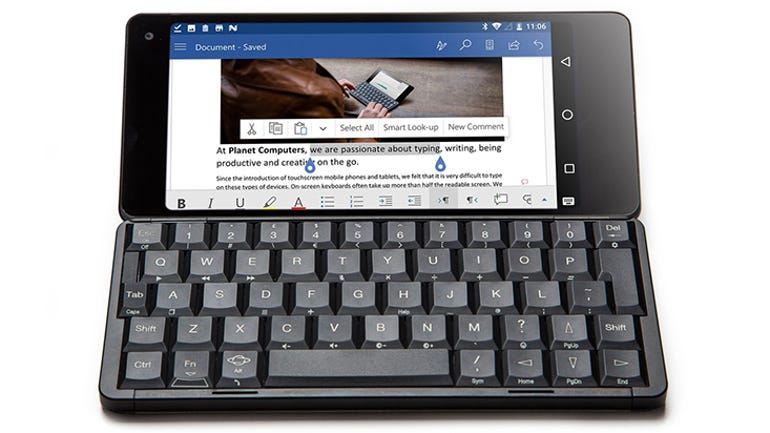 The Gemini PDA is intriguing -- part blast from the past in its clear homage to the Psion Series 5 that launched 21 years ago in 1997, and part harbinger of a future that sees smartphones as true productivity devices.

After all, when Android (and iOS), can be used to access all manner of cloud-based productivity systems, and when it's simple to attach an external keyboard to a phone, why not simply build one in?

The trick is to marry all the productivity features with the ability to make and take voice calls -- and here, sadly, things could be better. Still, voice calls comprise only a small part of the smartphone use case these days. And laptops can incorporate SIM cards, so why not extend the metaphor to keyboard-equipped handsets? A few years ago there were plenty of personal digital assistant (PDA) or handheld PC devices around, but they've disappeared. Gemini brings the concept back -- with a bang.

When I first examined the Gemini PDA late last year, it was a pre-production device. Having received one of the first production units, I've now had the chance to use it for a short period. It's an impressive device that deserves to succeed.

The price is £599 (inc. VAT). Yes, you can get a fully fledged laptop for that money, but it's price-competitive with many high-end mobile phones, which lack the benefit of a keyboard and the combination of Android plus dual-boot Linux.

My review unit was one of the first thousand off the production line and did not have the dual boot system installed. If the system is present, it's a simple matter of holding down the right side button when switching on to select either Android (version 7.1) or Linux. (And for early adopters like me, it's easy enough to install the dual-boot OS.)

The clamshell design of the original Psion Series 5 has been retained, although this time around the hardware is thinner, not least because it no longer needs a pair of AA batteries to power it. You'll need to be brave using the provided tool to remove the top plate in order to insert SIM and MicroSD cards. The Gemini uses a Micro-SIM, not a Nano-SIM, so you may need an adapter.

The Gemini is designed to be used primarily in landscape mode, and a small panel on the lid pops out to act as a stand that holds the 5.99-inch screen at the right angle for typing. (Sadly, the rather pleasing engineering of the Series 5's slide-out keyboard is not replicated here.) The 18:9 aspect ratio really suits this format, and the screen resolution of 2,160 by 1,080 pixels (403ppi) meant I could easily read everything I typed.

I am really sold on the keyboard. It might only be 162mm wide, but the keys are large enough for me to touch type at around 75 percent of my normal speed. The keys feel a little light for my taste, but the action is superb. The makers of the Gemini did a really smart thing in involving Martin Riddiford -- who designed the Psion Series 5 keyboard -- in this project: quite simply, nobody has come up with a better tiny form-factor keyboard since. The addition of plenty of shortcuts -- marked on the keys and as Fn key combinations -- should help you to work at a good speed.

I'll be interested to see how well the keyboard stands up to everyday use over an extended period. My old Series 5 might have a battered case (see above), but its keyboard still functions perfectly.

This isn't a device for photographers. There's just one camera -- a front-facing 5-megapixel unit whose main function is video calling. There's no NFC, while security is somewhat compromised as there's no fingerprint scanner. But there are two USB-C slots, both of which can be used for charging as well as for connecting a multitude of external kit, including a monitor via an HDMI adapter.

The Gemini runs a 10-core MediaTek Helio X20 chipset with 4GB of RAM. It performed fine under various test regimes, including carrying the device around for a few days to do everyday productivity using cloud apps, video streaming, a bit of light gaming and making a few video calls. There's 64GB of internal storage, of which 58.24GB was available on my review unit (there will be less free capacity with Linux dual-boot installed). With MicroSD support and the ability to attach external devices via USB-C, storage shouldn't be an issue.

See: From Linux to Cloud, why Red Hat matters for every enterprise

Android has been tweaked a little. There is a notes app that's basic but serviceable for those times when you can't get onto web tools and want to be productive. And in the spirit of the old Psion EPOC operating system, there's an App Bar onto which ten app shortcuts can be pinned. It might sound unnecessary given Android's home screen system, but it's actually a neat little touch.

I'm really not sure about using the Gemini for voice calls. It's not easy to see who is calling because the screen is hidden inside the clam. There are five alert lights hidden under a thin break in the outer shell, and these can be configured to let you know who's calling. But I doubt I could remember all the different patterns I'd need to set up to get this to work effectively. If you take a call with the clam closed, though, the earpiece and speaker are interchangeable -- it doesn't matter which way up you hold the Gemini, it functions fine.

Aside from problems with taking voice calls, there are a couple of other usability points to make in comparison with standard handsets. The screen is designed to be used in landscape rather than portrait mode: it can rotate, but the keyboard can't be swivelled right to the back, so using the screen in portrait mode is a bit awkward. That rules out a key use case for me -- ebook reading. Also, despite being compact for a keyboarded device, Gemini is still large and heavy for a phone (171.4mm wide by 79.25mm deep by 15.1mm thick, 308g).

I haven't been using the Gemini PDA for long enough to get a really strong impression of battery life. The 4,220mAh battery did manage to keep my review unit going all day during the testing period, though. I imagine, given the Gemini's limitations as a phone, that I'd probably carry a separate handset in addition to it, and so the battery would likely last a few days.

The Gemini PDA is an impressive device that's reminiscent enough of the old Psion Series 5 to pull its hardware strengths into 2018, while taking advantage of both Android and Linux to deliver a competent computing environment. It deserves to make waves and I, for one, wish it every success.

Google Tasks launches for Android and iOS: Basic list manager with potential for more
Like many Google products, we have the ability to create task list in Google Keep, Google Calendar, Gmail, and more. Google finally launched a product called Tasks and maybe it will serve as that central repository.

Google I/O 2018: What to expect and how to watch
Google's annual developer conference is just a couple short weeks from now.

New gadgets make the whole world your keyboard
As smartphones and headsets offer power to spare but little space to work on the go, a range of input options are allowing the entry of text and drawings on any nearby surface.