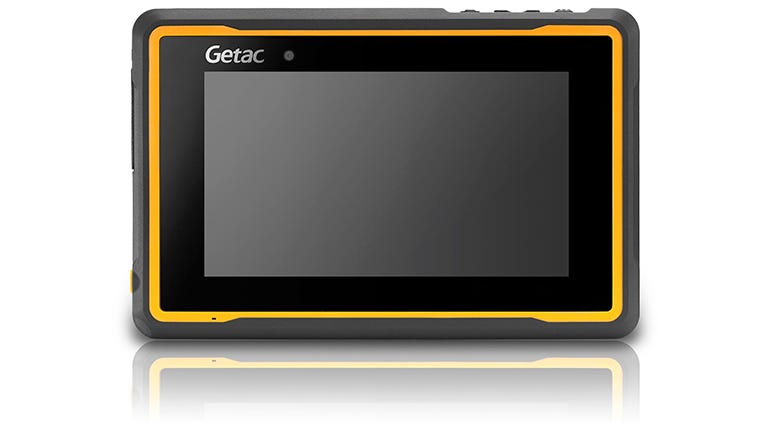 The Getac ZX70's seven-inch screen sits in a bezel measuring 20mm on the short edges and 15mm on the long edges. Then there's a further orange-coloured frame that adds 4mm around the edges, topped off by an outer rubberised protective layer that wraps over onto the device's front, forms its four edges, and stretches round to the back.

The result is a bulky and hefty seven-inch tablet weighing 780g and measuring 218mm by 142mm by 27mm. That's not a complaint, but a statement of fact -- ruggedness requires extra bulk and heft. The result is that the Getac ZX70 has an IP67 rating for dust and water resistance, and meets MIL-STD 810G (whose certifications include the ability to survive drops of up to six feet onto a hard surface).

The orange livery extends into the surrounds of each of the tablet's ports and connectors, and also forms a large chunk of the backplate. This gives the Getac ZX70 a suitably 'hard hat' look, and makes it pretty easy to locate.

The Getac ZX70 runs on Android 6, so it's not at the cutting edge of Google's mobile OS. But for this target market, proven reliability is more important than brand new features.

Computing power comes via Intel's 1.44GHz Atom x5-Z8350 processor and 2GB of RAM, with options for either 32GB or 64GB of internal storage. The latter can be expanded via a MicroSD card slot that sits next to the SIM slot under a protective side panel that can only be accessed by removing a screw.

Several options help to equip the Getac ZX70 for different use cases, including an RFID reader, an RFID/NFC combo reader, a barcode reader, 4G WWAN, and GPS. Standard features include a front-facing HD webcam and an eight-megapixel rear camera, a full-size USB 2.0 port, and a Micro-USB port on the bottom edge alongside a docking connector.

The 1,280-by-720-pixel matte touchscreen delivers an extremely bright 580 nits, making it easily viewable outdoors in bright sunlight. It's designed to be used with finger, glove or the stylus that sits on an extending wire tethered to a loop in the chassis. A stylus holder clips into one of two loops on the back of the casing. When it's not used for the stylus, the loop, along with a partner loop opposite it, can tether a hand-strap.

The Getac ZX70 is equipped with a sizeable 8,400mAh battery that should easily deliver all-day computing when you're in the field.

Like other rugged tablets, the Getac ZX70 is not an everyday piece of equipment, and its specialist focus is reflected in the price, which starts at £725 (ex. VAT) for the base model.

Its key specifications are:

Still, its flexible upgrade options and rugged build make this little tablet appropriate for a range of field service and other vertical markets requiring solid performance and good reliability.