Google Home review: A promising step toward the future 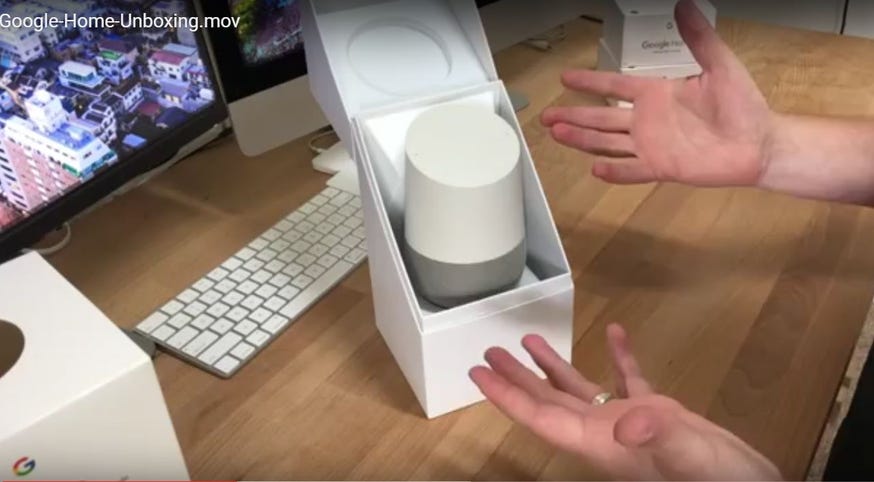 When Amazon announced a tall, cylindrical speaker designed to listen for commands ranging from adding items to a shopping list to asking trivia questions, I scoffed at the idea.

I didn't understand the value of an always-listening device. In some aspects, I'm yet to figure it out.

Eventually, I put an Amazon Echo in my house, and for the first month, my family and I used it all the time. From playing music during dinner to asking random questions and playing Harry Potter trivia games. But, as time has passed, its primary use is now reserved for setting timers along with my kids putting random condiments in my Amazon shopping cart as a prank.

When Google announced its version of the Echo, Google Home, I was immediately interested. The thought of a personal assistant in the form of a speaker on my desk being the same personal assistant I interact with on my phone is intriguing, and something Amazon can't come close to offering with Alexa.

Google Assistant on Home is far from perfect. It can't answer every query, and it has a hard time keeping context within a string of commands. There's lots of work to do, or as Google executives prefer to say: "It's early days."

And yet, Home feels very much like it's from the future.

There's not a whole lot to Google Home. Standing 5.62-inches tall and 3.79-inches round, the bottom third of Home is covered with a decorative speaker grill. Google sells additional bases, which are made of metal or fabric in various colors starting at $20.

The top of Home has a ring of indicator lights that turn on when it's listening for a command, and the back of the device has a mute button along with a power indicator light.

Home's design reminds me more of something I would expect a home fragrance company like Scentsy to offer. It tends to blend into your surroundings, or at least it does a better job than the Amazon Echo (Echo Dot notwithstanding).

Setting up Home is done through a companion app on an iOS or Android device, taking me under 15 minutes to complete. Think of the Home app as the control center for Home and any other Chromecast devices you own.

An Assistant across multiple devices

Right now, you can access Google Assistant across several devices. Android and iOS users can use the chat app Allo to interact via text with Assistant. Google Pixel owners can use voice or text. And, of course, there's voice access with Google Home.

The experience of Assistant on the Pixel and Assistant on Google Home is very similar. To activate Assistant, you use the wake phrase of "OK Google" followed by a command.

For example, "OK Google, play some music" will begin playing music using your preferred music service. Or "OK Google, tell me about my day" will run through the weather forecast, commute time, any items on your agenda, and then play a news podcast of your choosing.

The biggest selling point of Google Home is that it's not a standalone product, but instead it's an extension of Google products across multiple platforms.

You don't have to learn the semantic nuances of interacting with yet another personal assistant, as is the case with Alexa. With Google Assistant, you can interact with it using the same commands and queries, regardless if it's through Google Home, your Pixel phone, or an iPhone.

There are some limitations, including the inability to use Google Assistant on the Pixel to begin playing a YouTube video on a nearby Chromecast. For the most part, however, the experiences and capabilities line up with what you'd expect from a portable device like your phone -- and one that is stationary in your home.

Using Assistant on a Pixel and Home when the two devices are in the same room is a non-issue. When using the wake phrase, both devices naturally begin to listen. On a Pixel, that means the screen lights up and the Assistant interface is displayed. For Google Home, the indicator lights are activated.

However, as you continue with the interaction, Assistant on Pixel realizes a nearby Home device is responding and your phone stops listening. A brief message is displayed on the phone, stating "Answering on another device".

One of the issues I encounter using Siri on my iPhone and Apple Watch is that both devices listen for and respond to voice commands without ceding power to whichever one makes more sense to use based on the command.

Right now, OK Google is the lone phrase you can use to get Google Home's attention. It's frustrating repeating a rather lengthy phrase over and over when interacting with Home. Just imagine repeating these phrases during the course of a few short minutes. It becomes a mouthful.

Google's use of this phrase originated from Google Glass, and it made sense at the time. Glass was a device surrounded by privacy concerns from day one, and having a concise wake phrase made it clear to everyone nearby when a user was interacting with the camera-equipped headset.

Interacting with Google Home is something you are doing in the privacy of your own home. As such, having the option to customize -- or at the very least shorten -- the wake command is something Google needs to consider.

Naturally, whenever there's a connected device sitting with a microphone that's always on and listening, privacy concerns are sure to follow.

As is the case with similar devices, Google Home is only listening for its wake command. Only after hearing it, does the device begin transmitting what is said to Google's servers to decipher whatever action it needs to take.

You can view all of your personal recordings in the My Activity section of the Home app or by visiting a dedicated webpage that details your use.

Through the site, you can listen to recorded commands and delete recordings you don't want Google to have.

Additionally, a button on the back of Home will disable the microphone. You can still interact with Home by touching the top of the device until it lights up. With the microphone disabled, you turn Home into a device that only listens after physical interaction, in turn losing out on the convenience of giving commands from across the room.

A week after welcoming Home into my home, I'm really impressed with Google's approach.

The microphones are sensitive enough to pick up my kids whispering "OK Google" from two rooms away, and the speaker is loud enough to fill my office with music in place of my Sonos speaker.

I've used Home nonstop since it arrived, doing things like streaming music and setting timers. It seems basic, but those two tasks are very repetitive, and something that no longer takes the same amount of my attention away from what I'm currently doing.

Google Home is more than a pathway to music and timers; it can interact with devices within my home as well. After linking Home to my Nest account, I can now adjust the thermostat with my voice just as you can when using the Echo.

If you own a Chromecast streaming device, Home automatically recognizes it and allows you to play content on your TV using nothing more than your voice. For example, "OK Google play Vice News on TV" will begin streaming the latest YouTube videos in the Vice News YouTube channel with little effort on my part. Even more impressive is the lack of a delay between the time the command is registered and when the video starts playing.

I cannot wait until Google adds support for more services, such as Netflix or HBO Go. There's something fun, if not magical, about giving a voice command and a few seconds later watching your TV turn on and begin playing a show.

As useful as Google Home is for certain tasks, it falls flat for others. Asking Home for the start time of World Series Game 7 returns the expected result, but a follow-up command of "Add it to my calendar" fails with the response "Sorry, I can't add events to your calendar yet." A Google representative tells me adding the ability to create events on a calendar and send messages is something the company will eventually add but stopped short of providing any sort of timeframe.

Asking "Who wears number nine for the Colorado Avalanche" gets the response "I'm not sure how to help with that yet, but I'm learning more every day." The same query with Siri returns Matt Duchene, as it should.

That's just a couple examples of something Google Home, and by extension Google Assistant, should be able to handle but can't.

Should you buy one?

Ah, yes, the $129 question. Is Google Home something you should buy? As is usually the case, it depends.

Seamlessly interacting with Assistant across multiple devices and through various mediums is a critical feature that can't be overlooked.

For someone who is heavily invested in Google services, I see no reason not to recommend it. Google Assistant leverages the data you already provide to the company and creates one of the more robust personal assistant experiences currently available.

For those who don't use Google services like Gmail or Calendar, Google Home can still provide you with access to Google's knowledge graph for quick searches, and it's a capable speaker all in one.