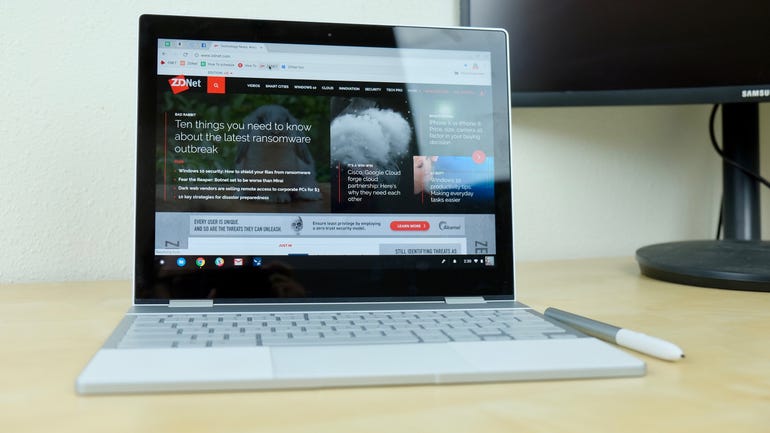 The Pixelbook is one of the latest entries into the Pixel line. The Pixelbook runs Chrome OS, is powered by an Intel Core i5 (or i7) processor, and up to 16GB of memory, and up to 512GB of storage. On the spec sheet, at least, it's a full-fledged computer -- operating system not included.

For the past two weeks or so, I've been using a Pixelbook with an Intel Core i5, 8GB of memory and 256GB of storage. Google also sent me a Pixelbook Pen, for jotting and drawing on the touchscreen.

I've always been a fan of Chrome OS, but have stopped short of replacing my laptop or iPad Pro with a Chromebook. Between predominantly low-end hardware, Apple's tight integration across its entire product line, and my reluctance to relearn the quirks of an entire OS, I never fully committed to the platform.

But after my time with the Pixelbook, I've found myself reconsidering. It's amazing what quality hardware and stellar performance can do. 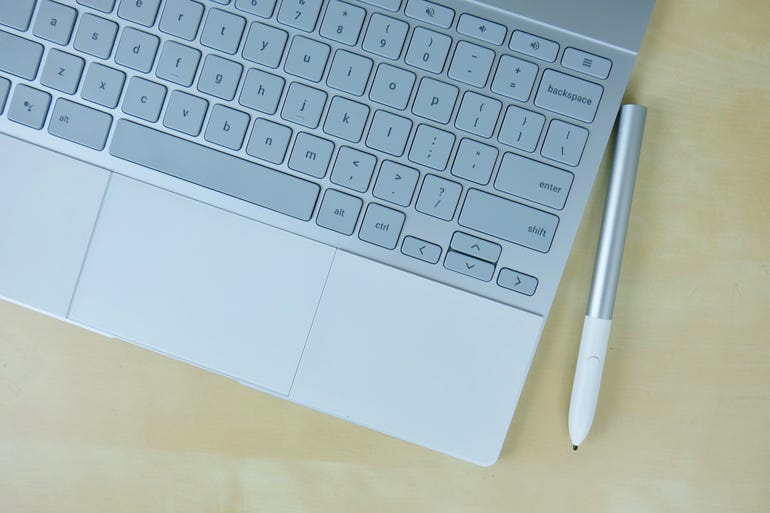 The design of the Pixelbook is somewhat muted. A combination of metal, rubber, and glass combine for the makeup of materials. The silver and white color scheme is familiar, borrowing from the basic look of the silver Pixel XL.

On the right side is a single USB-C port for sync and charging. On the left side is where a power button, volume rocker, and another USB-C port are found.

The hinges are sturdy and rotate so that the screen sits flat on the bottom of the Pixelbook for use as a tablet. The cutouts for the hinges double as the location of the speakers, so even if you're using the Pixelbook on your lap or pressed into your body, you won't muffle the sound. The speaker location also means when you're not using the Pixelbook in the standard laptop orientation, you can still hear.

The keyboard reminds me of Apple's butterfly mechanism on the current MacBook Pro line, only better. The keys have a subtle tactile feel to them and pop back into place almost instantly.

A large, black bezel surrounds the 12.3-inch 2400x1600 Quad HD LCD touch display, with a small camera cutout at the top of the screen. 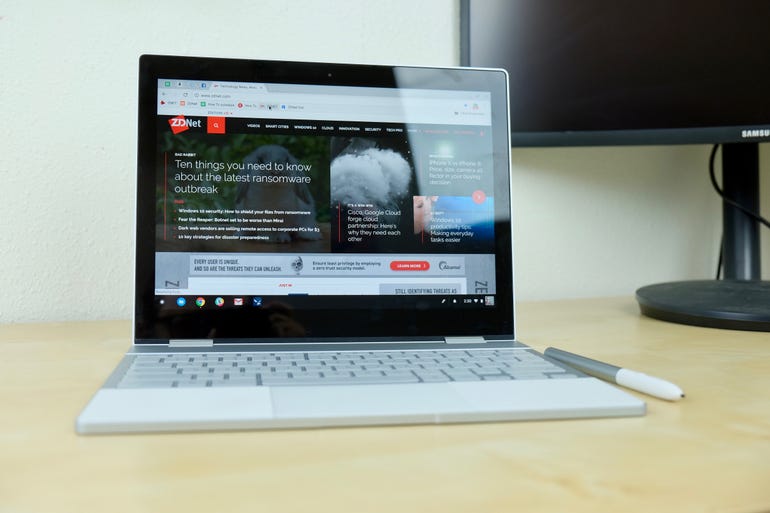 Chrome OS started as what amounted to a browser window, with tabs replacing windows. Eventually, Chrome extensions and apps added to its functionality. Google more recently added the Play Store and access to its catalog of Android apps to the platform.

This slow expansion of functionality has both hurt and helped Chrome OS as a whole. Instead of pushing forward in one area, and getting it wrong, Google has slowly figured out what the best use for this platform is. What once felt like an OS destined to be nothing more than a glorified web browser, now has the groundwork to begin competing with the likes of Apple's iOS thanks to the Android apps.

During my review period, I used the Android version of Adobe Lightroom for some photo editing, along with a few other apps optimized to work with Chrome OS. While I think there's still some work to be done in order for the navigation and overall experience of Android optimized apps, the added functionality is something Chrome OS has been desperately missing.

Starting with the Pixelbook, users now have access to Google Assistant. Users can summon the digital assistant with the traditional wake phrase of "OK Google." Currently, the phrase will only work when the Pixelbook is unlocked and the screen is lit up. Google is working on adding the ability to summon Assistant when the device is sleeping.

Alternatively, a new dedicated Assistant button sits to the left of the Alt key on the left side of the keyboard. Once Assistant is listening you can type or speak commands to request information, set reminders, or compose a new email.

The combination of a lightweight OS and powerful processors, an abundance of memory, and enough storage for most leads to smooth performance. At no time did I feel like the Pixelbook was underpowered or have issues with sluggish performance. Battery life is the only thing I would love to see improved, with the battery not quite enough to last through an entire day of work. It's close, though. 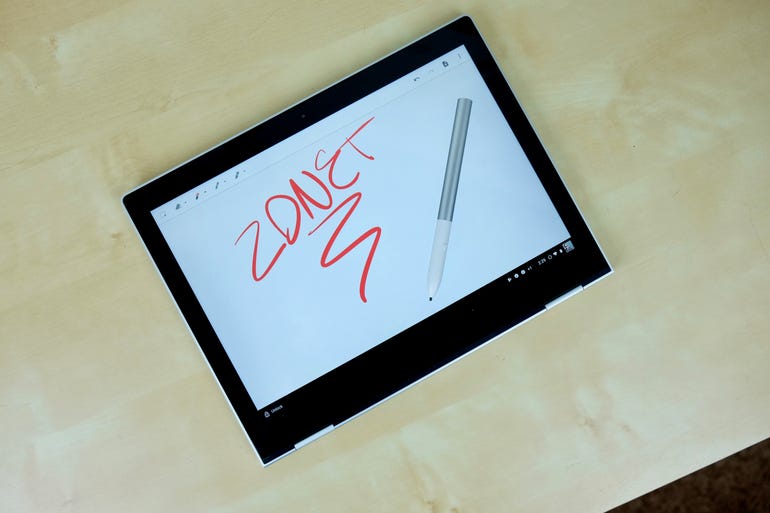 I'm horrible at drawing, and my handwriting is hard for even me to read, so I didn't use the Pixelbook's Pen for an extended amount of time during my testing.

The Pen itself is the size of a typical pen and is powered by a single AAA battery. There's no need to pair the pen with the Pixelbook. Whenever the pen is nearby, a pen icon is shown in the app shelf. Put the pen to the screen, and write, or draw, or mark a webpage with notes.

When in use, pressing a button on the side will activate Google Assistant, and will search anything you highlight with the pen. This is useful for translating text, or if you're unsure what a word means.

Click or tap on the pen icon in the shelf to bring up options for screenshots, a magnifying glass, or use the pen as a laser pointer.

In my testing, the Pixelbook Pen worked just as well as any current stylus available. Be it for the iPad Pro or the Galaxy Note 8.

There's no question about it, the Pixelbook is expensive. Really, expensive. Starting at $999 for a device that runs Chrome OS, a mix of the company's Chrome browser and Android, it's not uncommon to hear someone state it's hard to justify paying four figures for a Chromebook. Especially when you consider the number of Chromebooks available right now for a third of the Pixelbook's starting price.

Yet, I think Google's pushing the high end of its Chromebook platform in the right direction. The Pixelbook is a quality device made of premium materials that provide a premium experience.

It's rare to hear anyone call Apple's iPad Pro lineup too expensive, citing the fact that it runs a mobile phone OS as one reason. An iPad Pro with 256GB of storage, Apple Pencil, and the keyboard comes out to just over $1,307.

Add up the Pixelbook, Pixelbook Pen and the case Google sent me for this review, and it comes out to around $1,387.

The difference is that Apple sets its own prices and is the only one pumping out iOS tablets. Google's approach is obviously different, working with partners to create robust experiences on budget-friendly hardware. 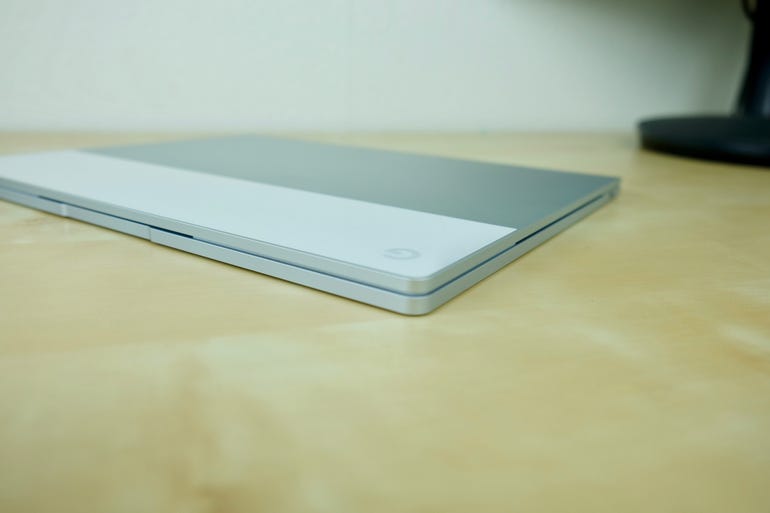 As someone who used to primarily work from an iPad, about halfway through the Pixelbook review process, it occurred to me: The Pixelbook is more of a computer than the iPad Pro is. Yes, Apple has many more apps, and better quality apps at that, than Chrome OS right now.

But looking at the total package, and the fact there are fewer required workarounds and less of a learning curve for the user (file management is a big one, despite the iOS 11 Files app, as is multiple windows open at the same time), the Pixelbook instils confidence in the user as a computer that he or she can work on.

I've spent countless hours researching and implementing workarounds for tasks on the iPad, just to make it work for me. In reality, I was working for it. At times Chrome OS requires the same effort, but with less frequency and intensity.

The pricing of the Pixelbook is sure to scare off many users, but when you view it on the same level of Apple's iPad, it becomes a little easier to justify.