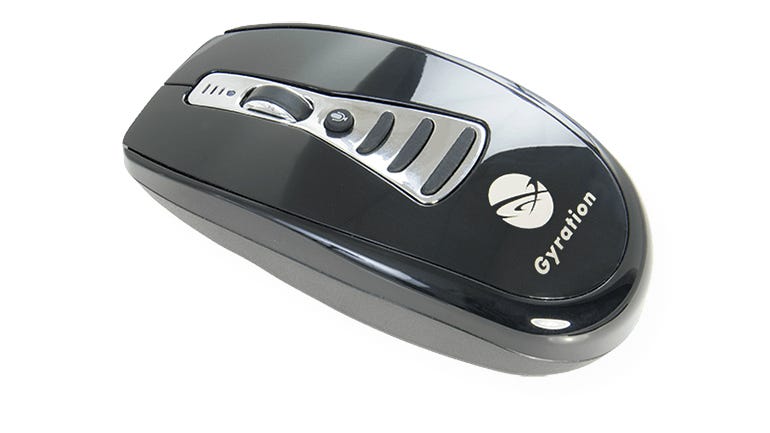 Gyration has a longstanding reputation for making mice that can be used both on the desktop and off. Ideal for people who do a lot of presenting in front of an audience, these devices allow you to stand well away from a laptop or presentation screen, controlling things from afar.

This latest addition to Gyration's stable, the $99 Air Mouse Voice, adds spoken commands into the mix of wand-like sweeps and swoops, to give a further range of controls.

The Air Mouse Voice can be used up to 21 meters from a laptop thanks to its use of Bluetooth LE 4.0. A dongle would have provided slightly greater range, but Gyration told me it preferred Bluetooth because of its fuss-free setup and the fact that a dongle is just one more component to mislay.

The mouse works in standard desktop mode, and incorporates a pretty straightforward design for that use case, with a wheel and pair of buttons that fall comfortably under the fingers, and a domed profile that ensures a snug fit in the palm.

Pick up the mouse and depress what Gyration calls a 'trigger' button on its underside, and the cursor can be controlled in mid-air, allowing you to access key desktop features while standing and moving around. The mouse buttons and scroll wheel work in this mode too.

To get the best out of the Air Mouse Voice, though, you'll need to download the MotionTools software. This is the control centre for the Air Mouse Voice's wider range of features, including its three additional 'Media' buttons and voice control.

The Media buttons each provide access to functions that are organised in the MotionTools software into four groups called 'contexts' -- General, Internet, Media player and Presentation. You can configure each of these mouse buttons to perform a particular function within those four contexts, and you can rename the contexts to accommodate other needs requiring a different group of functions.

So, for example, a button could put a stamp on-screen (marking a presentation slide, for example), allow a sort of virtual laser pointer to move around the screen to draw attention to different areas (for example in a slide), draw on-screen, or act as a highlighter.

Each context can also accommodate four 'in the air' gesture controls -- left, right, up and down sweeps -- that can also be attached to particular 'contexts', either duplicating or adding to the button functions.

So, that's a total of up to seven different controls, via button and gesture, per 'context'. Switching between the four contexts provides access to a new range of controls.

Added to that, the software can accommodate a number of different profiles, each one with four contexts available. The upshot is, there are multiple different combinations of controls available for a range of scenarios.

A fourth button on the Air Mouse Voice is marked with a speaker icon. This activates the voice-control functionality -- 27 predefined commands that can be spoken into the tiny mic that sits just above the mouse's wheel. You can use spoken commands to open apps, perform some basic text functions (cut, copy, paste), control volume, use the aforementioned stamp tool and more.

Overall, these tools work well, and definitely add a new dimension to using a mouse. But there are issues.

Voice control is good as far as it goes, but you can't define personalised commands. Even the button-based gestures only allow for one custom command -- an application launch based on the user identifying the location of an executable file. The ability to add more commands would greatly enhance this mouse's potential.

Also, the MotionTools software has a rather old-fashioned look about it, so an overhaul to give it a more professional UI might be a good idea. Finally, on a more general note, the Air Mouse Voice could be more solidly built -- it's plastic throughout, and feels a bit flimsy. I wonder how long it will survive being thrown into a laptop bag?