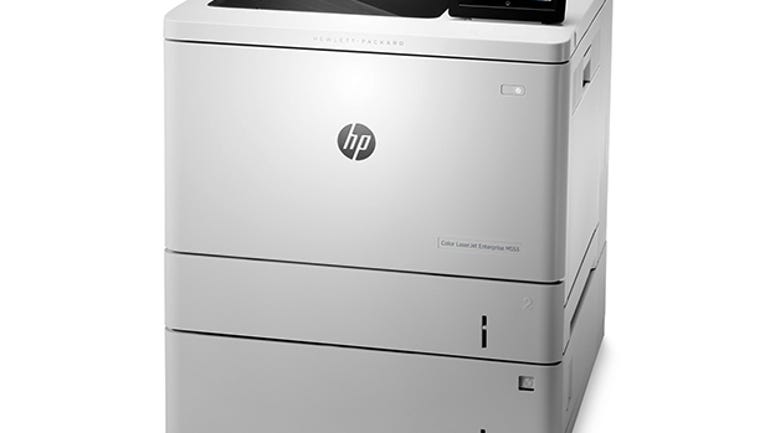 A lot has been written about the wisdom, or otherwise, of HP's planned corporate split, putting enterprise hardware and services together under one brand while creating a separate company for PCs and printers. The deed itself has yet to be done, but changes are under way and one consequence appears to be a renewed focus on core markets, especially printing.

Despite growing competition, HP continues to dominate the printer market with around 40 percent share overall. In recent years, however, the company could be accused of resting on its laurels and following the pack rather than leading -- especially when it comes to business lasers. This is a trend HP clearly wants to reverse with a new series of Color LaserJets featuring a consumable technology called JetIntelligence, designed to make this still-expensive colour printing component a little more affordable.

HP has gone back to the drawing board with the consumables used by the new Colour LaserJets and has invented ColorSphere 3 toner, which comprises particles with a durable outer shell around a low-melting-point inner core. Toner can be fused at much lower temperatures, allowing the printers to run a lot cooler, which makes them up to 53 percent more energy efficient compared to previous models, according to HP.

Page yields are also improved, by a claimed 33 percent, with the JetIntelligence technology tracking cartridge wear and usage to both further deliver on that claim and provide more accurate information on toner levels.

Colour LaserJets featuring JetIntelligence toner technology are available for both small business and enterprise use, each with its own consumables and requiring the usual four cartridges (Cyan, Yellow, Magenta and Black). SME buyers can choose between a standalone printer (the Colour LaserJet Pro M252) and an MFP (Colour LaserJet Pro MFP M277), but for our evaluation we looked at the LaserJet Enterprise M553x, a much more capable colour laser aimed at workgroups printing up to 6,000 pages per month.

Standard and high-yield cartridges are both available, our review unit shipping with the former, which are rated at 6,000 pages for black and 5,000 for colour. High-yield replacements, however, are much better value, the black cartridge delivering a claimed 12,500 pages and the colours coming in at 9,500 each.

Recommended price for a full set is an eye-watering £804 (ex. VAT), which seems expensive when the printer itself can be had for around £650 (ex. VAT). Given the higher yield, however, the cost per page is much less than with previous models. Moreover, we found genuine consumables on sale for just over £660 (ex. VAT) per set, which comes to around 7-8p per page, putting the M553x on a par with a high-end printer/copier on a managed print contract.

There are other benefits too, including an internal toner seal that eliminates the need to pull out that messy plastic sealing strip before fitting a new cartridge. A small enhancement, perhaps, but it makes maintenance a lot cleaner and allows the printer to be delivered with toner in situ, ready for immediate action.

JetIntelligence consumables also enable the new Colour LaserJets to deliver outstanding-quality documents, print them very rapidly, and continue to do so page after page after page.

Capable of delivering quality colour output at 1,200 by 1,200 dots per inch (dpi), the laser engine in the M553x is rated at 40ppm for US Letter size prints, dropping to around 36-38 ppm for A4 in our tests. It also comes with a duplexer and can print double sided with no loss of speed. We found that the LaserJet M553x was consistently able to deliver the first page in 9-10 seconds during our tests, all of which were run over a Gigabit Ethernet network connection.

More than the sum of the consumables

Of course there's more to a printer than its engine and consumables, no matter how fast or innovative and here, too, the LaserJet M553x, has a lot to commend it.

To start with, HP has gone for an elegant and compact, if somewhat boxy, design with rounded edges and few of the flimsy and easily damaged plastic artefacts found on some printers. It's big (it has to be) but not excessively so, and the catch tray for printed documents is in clear reach on the top of the printer with a flip-up 4.3-inch colour control panel alongside for local management.

Very little management is needed, although UK users do also have access to a useful service called HP Private Print where documents can be queued in the cloud then released by the user from the printer panel. This helps save waste when users forget to pick up their prints as well as insuring confidentiality, as users have to be present at the printer for documents to be produced. Authentication can be via PIN or ID card.

You get two paper drawers, one on top of the other, with a 550-sheet drawer directly beneath the main print engine and a 2,550 high-capacity drawer at the bottom. A 100-sheet multi-purpose feeder for labels, card and so on completes the standard paper-handling complement, with fourth and fifth 550-sheet drawers optionally available for those with heavy-duty requirements.

Connectivity options start with a USB 2.0 port for direct local attachment, which on this kind of laser is unlikely to be used. Instead the M553x will, typically, be connected to the LAN via its built-in Gigabit Ethernet port. Wi-Fi Direct printing is another standard feature, along with NFC printing from suitably equipped mobiles that can simply be tapped against the logo moulded into the casing next to the colour control screen. Bluetooth isn't available, but there is support for Apple AirPrint, Google's Cloud Print 2.0 and HP's own ePrint technology.

Maximum duty cycle is a massive 80,000 pages per month, although a more modest 2,000-6,000 is the recommended monthly volume. And to deliver all that there's a 1.2GHz processor with 1GB of RAM, upgradeable to 2GB if needed, along with the usual PCL and PostScript language support plus native PDF printing.

The LaserJet M553x is relatively noisy when printing, although not excessively so, but is power-frugal thanks to its new consumable technology. And it's virtually silent most of the time, quickly snapping out of energy-saving sleep mode when called upon to print.

This is a very capable and usable printer which, thanks to its speed and high-quality output, tends to encourage users to commit documents to paper. Its only real drawback is the high price of replacing the consumables when they run out. That said, in terms of cost per page, it's a step in the right direction and shows HP's venerable print division addressing a long-standing customer concern.