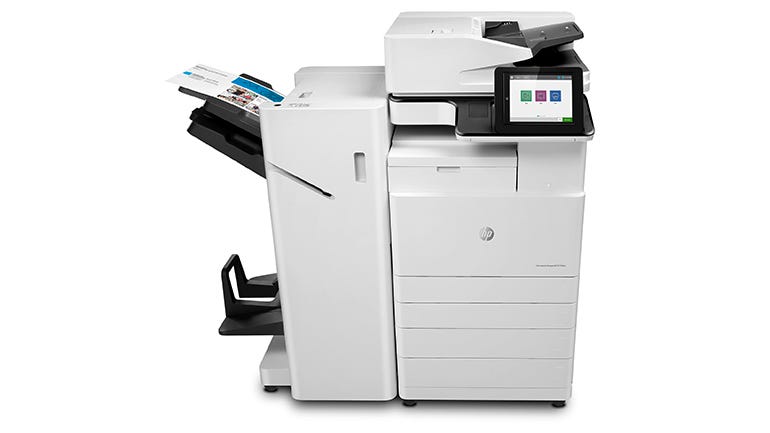 There are three reasons for sitting up and taking notice of HP Inc's new Colour LaserJet Managed MFP E77830 -- not least a completely new A3 laser engine developed in the wake of the $1billion acquisition of Samsung's printer business last year. Added to that, the device is part of a push to reassert HP's brand across both consumer and business printer markets, with the E77830 helping to fill a long-standing gap when it comes to large-format LaserJets. And last, but by no means least, it's stuffed full of new security features designed to give HP's business printers the same kind of protection against hackers and malware attacks as other networked devices.

Let's start with that new A3 laser engine, which the first to emerge from the Samsung deal and, on this model, capable of churning out thirty A4 pages per minute in colour or black and white. That, of course, reduces to 15ppm in the larger A3 format, but is impressive throughput nonetheless. Moreover, with a maximum duty cycle of 300,000 pages/month, the new engine is capable of handling some pretty heavy-duty print workloads day in, day out, with a recommended monthly volume of 30,000 pages.

The MFP E77830 is a lot more than just a workgroup printer: a fast 1200dpi flatbed scanner complete with an automatic document feeder (ADF) effectively turns it into a large-format copier -- hence 'MFP' (Multi Function Printer) in the name. Able to scan up to 120 colour pages per minute, this is plenty quick enough to keep up with the print engine, delivering a top copy speed of 30ppm for A4 documents, whether copying in colour or black and white.

Depending on the model specified, the ADF can hold up to 250 original A3 documents. As well as copying documents, you can of course scan and save to a variety of destinations, including network folders, email, SharePoint and Office 365 as well as plug-in USB drives. You can even scan to fax (and receive faxes if still using that technology), plus it's all driven from a tablet-sized, touchscreen with the latest Android-like user interface now common across HP's high-end enterprise LaserJet family. This we found very easy to operate with lots of features to not only scan and copy documents but crop, edit and fix issues on the fly rather than having to edit back at the desktop.

A lot of work has clearly gone into integrating the Samsung laser engine into the new printer, which is every inch a LaserJet and incredibly well engineered. Neither does it want for paper-handling features, with duplex printing provided as standard together with a fold-out 100-sheet multipurpose paper feeder to one side and two 520-sheet drawers underneath. In addition, the model we looked at had a further 2,000-sheet feeder at the bottom of the stack with optional stapler, finisher and hole-punch attachments also available.

The electronics are all HP, with a 1GHz processor supported by 6GB of RAM providing the computing power and hosting the usual mix of PCL and Postscript emulations plus native PDF printing.

Networking is catered for by a Gigabit Ethernet port on a removable side panel that includes a clutch of USB ports; if you want wi-fi, optional add-ons are available -- although on this kind of enterprise MFP, wireless connectivity is a far from common requirement.

Security is a growing concern and, according to HP, network printers are often overlooked when it comes to security policy, despite being just as vulnerable as any other network device. (Need convincing? Watch this HP video starring Christian Slater to see how easy it might be for hackers to exploit printer vulnerabilities and access your network.)

With such vulnerabilities in mind, HP is now equipping not just the MFP E77830 but others in its enterprise printer family with an array of defences built on three core technologies. The first is HP SureStart which, as with similarly protected HP laptops, checks the BIOS every time the MFP is powered on and reloads a protected 'gold' copy if any unexpected changes are found. There's also a whitelisting feature to ensure the printer only ever loads authentic HP firmware, while continuous monitoring provides real-time intrusion detection, automatically ceasing operation and rebooting the MFP in the event of a suspected attack.

Beyond this new level of built-in protection the MFP E77830 also supports secure printing with print jobs held on an encrypted hard disk until released following user authentication, either at the console or using an optional ID card reader attachment. All of which enables HP to claim that it has the world's most secure printers, with HP JetAdvantage Security Manager enabling these and other security features to be centrally applied and monitored using simple policy-based controls.

But enough with the technology: the sharp-eyed will also have noticed the word 'Managed' in the new MFP's name, which means that, unlike most other LaserJets, you don't buy it outright or have to manage and keep it stocked with consumables yourself. Instead it's leased and maintained on a managed print service (MPS) contract either from HP or, more likely, through a reseller -- just like other MFP products from rivals such as Canon, Ricoh and Xerox.

The actual price you pay to run an MFP E77830 will vary depending on the contract terms, usage and number of devices but, according to HP, you can expect an overall 'per click' rate of around 2.5p to 3p per A4 page and double that for A3. For that you'll get bright, clear and very usable colour documents that will be more than adequate for most business applications. You can also rely on fast throughput, with a typical first page out in under 8 seconds in our tests, as well as consistent 30ppm throughput for long jobs.

Regular maintenance will typically come as standard as part of the deal, but consumables are an easy swap and don't need much attention: the black toner cartridge is rated for a whopping 34,000 pages while the colours (cyan, yellow and magenta) go for 32,000 pages each.

The Managed MFP E77830 will certainly help to fill the large-format gap in HP's LaserJet family, and will do so with some aplomb. There's no evident trace of Samsung heritage: it's a LaserJet through and through, delivering exactly what's expected of the marque while also adding a raft of valuable new security features.