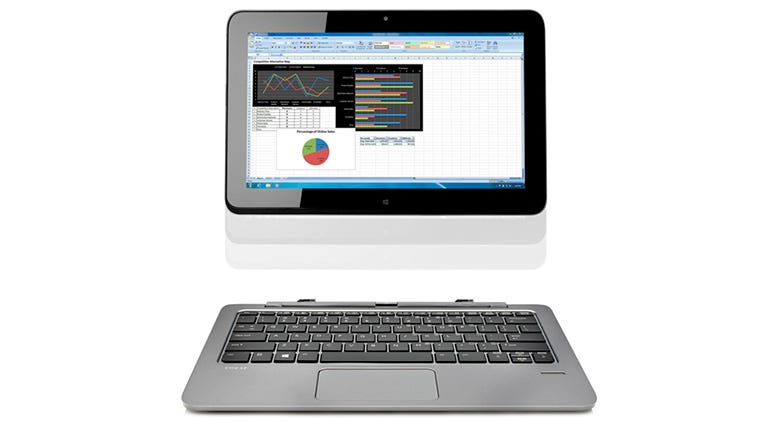 If you're seeking a compact convertible Windows tablet for business use, there's plenty choice -- including Lenovo's ThinkPad Helix 2 and Toshiba's Portégé Z20t. You might also consider ASUS's Transformer Book series, including the Transformer Book T300 Chi that we recently reviewed.

Build quality is superb. The underside of the detachable Power Keyboard is made from slip-resistant rubber, with tough metal protecting the top side. The same metal is used for the tablet's back, making for a very robust device. The tablet's tapered sides and top belie its thickness: at 10.7mm thick, it's bulkier than you'd expect a standalone 11.6-inch tablet to be; it's heavy too, at 780g.

The bottom edge of the tablet is flat because it needs to sit securely in its keyboard dock. The dock relies on a pair of hinges that lock into place on the tablet when you push it down; the hinges are unlocked using a release button allowing you to lift the tablet away. It's a secure system, and had no worries about the docked system coming apart while rattling around in our travel bag.

The hinge allows you to tilt the tablet back as far as you would expect the screen on a normal laptop to go -- that is, just past 90 degrees. You can't push it further to access the 'tent' mode that some swivel-screen laptops now offer.

The tablet and the keyboard are the same weight (780g), so there's less danger of the clamshell unit toppling backwards when you prod at the screen with a finger than with other tablet-heavy configurations. When docked, the device measures 29.8cm by 20.61cm by 2.08cm and weighs 1.56kg.

The 11.6cm touchscreen on our review unit had a full-HD resolution of 1,920 by 1,080 pixels, while cheaper models make do with 1,366 by 768. The IPS panel is sharp and bright with superb viewing angles. We had no complaints when using it for tasks ranging from web browsing and video viewing to email handling and document creation.

The touchscreen responds well to finger presses and sweeps, and HP also provides a stylus that could prove useful. Irritatingly, the stylus housing is on the bottom edge of the tablet so that when working in laptop mode you have to lift the whole device up to access it.

It's also worth noting that the screen is relatively small for laptop working and may not be suitable if much of your time is spent on document creation and editing. The display is also very reflective, which might put off some potential buyers.

HP has done a great job with the keyboard. The QWERTY and number keys are well sized and spaced, and have a springy and responsive feel. We had no trouble touch typing at speed and welcome the fact that the keyboard is backlit. There are two levels of backlighting, which are easily configured via a Fn key.

HP's Forcepad trackpad is responsive as far as cursor movement is concerned, but we're not huge fans of its single, non-physical button system. The idea is that gestures cater for things like selecting text for cut, copy and paste operations, but we found it fiddly to use. If you're an expert user it probably does save time and effort, but we think it overcomplicates actions that are universally understood and implemented across multiple devices.

Our review sample of the Elite x2 1011 G1 ran Windows 8.1, with Windows 7 is also an option -- and of course you can upgrade to Windows 10. It came with a 256GB SSD, which is reasonably healthy by solid-state standards, but you may feel you need more storage for everyday computing. The tablet is powered by a 5th-generation (Broadwell) Intel Core M-5Y51 running at 1.1-2.6GHz with 8GB of RAM, and we had no complaints about its performance.

It's great to see 4G LTE support on the tablet. The SIM slot is under a cover, next to a Micro-SD card slot. There's a headset jack on the tablet too, as well as a 5-megapixel rear camera and 2-megapixel front-facing camera.

So far, this is all very positive -- but there are some significant drawbacks that are all the more annoying because of this system's premium price.

Ports and connectors are a major issue, because the majority are on the keyboard.

Here you'll find two full-size USB 3.0 ports, a DisplayPort, a headset jack and a smartcard reader. A docking connector caters for an RJ-45 Ethernet port if you purchase an optional adapter. There's also a fingerprint sensor on the wrist rest.

As far as we're concerned, it's counter-intuitive to have a detachable tablet that lacks its own USB port. There's also no reason that HP couldn't have put a Mini-DisplayPort or Mini-HDMI connector on the tablet -- and then duplicated these ports in full size on the keyboard. Frankly it's what we'd expect at this price.

The keyboard pretty much monopolises charging too. Although power can be administered to both the tablet and the keyboard, the former requires an adapter for the docking connector, while the keyboard has a jack for the AC adapter's round-pin connector.

This arrangement makes it tricky to leave the keyboard at home. And without USB charge facilities for the tablet you also need to factor in carrying the laptop-style charger -- either with its optional tablet converter or for use via the keyboard.

Our other niggle is with sound quality. Twin speakers deliver loud but terrible-quality output that's high on treble and very low on bass. If you want a convertible because you need to deliver presentations that rely on high-quality audio direct from the device, then this is not the device for you.

You'd expect HP to throw everything including the kitchen sink at a convertible as expensive as this one, and to do so in superlative fashion. So the presence of elements like a stylus, a fingerprint sensor, LTE support and a backlit keyboard are all welcome. The solid build is also a big plus.

Yet there are some fundamental problems. The poor quality of the internal speakers is merely irritating, but the lack of connectivity on the tablet is a fundamental mistake, as is the need to use a converter to charge the tablet's battery.