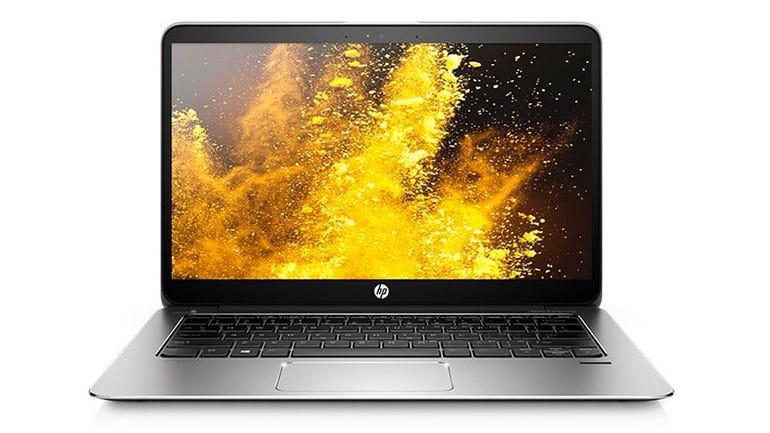 HP's latest premium business-class notebook is the 13.3-inch EliteBook 1030 G1, which sits in between the 12.5-inch EliteBook Folio G1 and the 14-inch EliteBook 1040 G3. It's designed to pack a decent-sized screen into a compact chassis and offer functionality suitable for business travellers -- including a claimed 13-hour battery life. At the time of writing, prices on HP's UK website range from £855 (ex. VAT) to £1,339 (ex. VAT).

HP has earned a good reputation for producing sturdy, functional small-format notebooks. Although it's neither as thin nor as light as the EliteBook Folio G1 (HP's thinnest and lightest ever), the fanless, passively cooled EliteBook 1030 does have some compelling vital statistics. It packs a 13.3-inch screen into a chassis with a footprint of just 31cm by 21cm, measuring 1.57cm thick. The laptop's 1.16kg weight is impressive too, although I can only imagine how HP must have wished it could have shaved off another 160g somewhere along the line.

The build is typically HP. Rounded edges and a tapering of the chassis to the front are familiar enough. I particularly like the slight overhang of the lid which, along with an almost imperceptible shaping in its centre, helps you open up the laptop. In fact, if I was careful, I could open the EliteBook 1030 one-handed, which is quite a rarity.

A solid machined aluminium chassis gives the innards a high level of protection. This extends across the lid and sides as well as the keyboard area. I had to apply quite a lot of pressure to bow the lid, which is good news for those who want to throw their laptop into a bag without worrying about a protective sleeve.

The base is black and rubberised, a finish that has two functions. It stops the laptop from slipping around on the desk, and makes it less likely to slip out of the hands when carried. The aluminium finish is much less grippy.

This is an old-fashioned style laptop whose screen doesn't tip back far past 90 degrees. So, while the grippy base might be useful when working in challenging circumstances like a train or airplane, there's no option to fold the laptop up tablet-style if space is really tight.

HP says the display is 'near edge-to-edge', which is a fair description. There's a 5mm bezel on the sides, with 13mm at the top and 18mm along the bottom.

The touch-enabled screen goes very bright, and we found it easy to work outdoors. It's reflective, though, which is pretty much par for the course these days.

The high screen resolution make this notebook well suited to delivering multimedia presentations, as well as for downtime entertainment. Stereo audio comes courtesy of Bang & Olufsen, and audio quality stays good even when volume is ratcheted up to its (loud) maximum level. I'd like more bass, but that's not unusual, and overall this laptop would definitely pass muster for delivering a presentation in a business meeting or participating in a videoconference.

The keyboard has HP's usual solid and responsive feel. There's a nice bounceback to the keys, which 'thunk' slightly rather than clicking. This will be a plus for those who work in quieter public places and find clicky keyboards annoying. The backlight comes on automatically when either keys or the ClickPad are touched, and can be cycled through two brightness levels or disabled via a Fn key.

The ClickPad itself can be disabled with a double tap in its top-left corner, at which location an orange light displays as a reminder that the pad is off. You turn it on again with another double tap. This is a lot more convenient than remembering which Fn key to press to toggle the pad, as is necessary with some laptops.

Mouse buttons are integrated into the flat pad, and HP has got the ergonomics of this system just about right. Click and drag feels comfortable, and the pad is sized so that it's possible to move the cursor fully across the screen in one sweep.

The four priced off-the-page configurations available have the following key specifications (our review sample was the £1,294 ex. VAT model):

Note that the two less expensive models don't benefit from a PCIe SSD interface. With its faster data transfer rates, PCIe is preferable to SATA for those who work with large numbers of files or with very large files. There's also a difference in the selection of TLC (Triple Level Cell) or MLC (Multi Level Cell) SSDs. TLC flash is less expensive and can have shorter lifespans.

That said, either MLC or TLC should provide years of life before failure, and in everyday use the average user is unlikely to notice a significant difference in performance.

The edges of the EliteBook 1030 carry an array of ports and connectors, including two USB 3.0 ports, one USB Type-C port, a full-size HDMI port and a headset connector. There's also a connector for an HP dock. My review sample also had a fingerprint sensor on the wrist rest.

HP claims up to 13 hours of life from the 4-cell, 40Wh battery. However, my anecdotal testing suggests that it may not be possible to work for a day away from mains power from a full battery charge even if usage is not particularly demanding. To give one example: running mainstream workloads (document creation/editing, email, web browsing) from 9am to noon with the screen set almost to full brightness depleted the battery from full to 62 percent, at which point the laptop reported just 2 hours 57 minutes of life remaining.

If you're seeking a large(ish), high-quality screen packed into thin and light notebook, HP's 13.3-inch EliteBook 1030 is a solid contender. Good sound, a very responsive keyboard and a screen that's usable both outdoors and inside are all plus points. Battery life that may fall short of a full day's work is the main drawback.