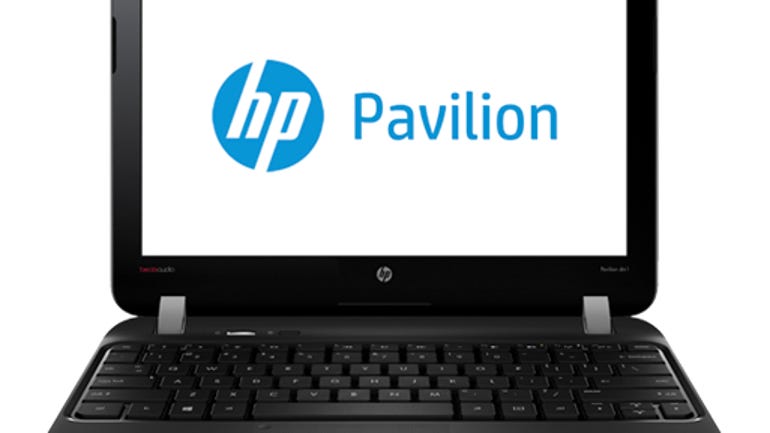 Well, this has been quite a learning experience, to say the very least. It has been unprintable, to say the very most. I have been watching for the next generation in the HP Pavilion dm1 line for some time now, as my current dm1-3105ez has become one of my favorite laptops — despite its detested Synaptic 'ClickPad' pointing device.

I had a dm1-4010 for a short time (long enough to see that it didn't have a ClickPad, and that it worked very nicely with Linux), but then I passed it along to a friend. The other difference between those two was that the 3105 had an AMD E-350 CPU, while the 4010 had an E-450, so I have been watching to see what the next generation would have.

The only problem was that it comes with Windows 8 preloaded, but I figured I'm going to have to bite the bullet and have a go at Windows 8 sooner or later, so why not. The good news was that I checked the specifications very carefully, and there was no mention of "UEFI" or "Secure Boot" or "Made for Windows 8", so at least I shouldn't have to fight with that yet.

There were some other nice points in the hardware configuration — for example, it has at least one USB 3.0 port, which is something else I have been watching and waiting for; this particular model has 4GB of memory and a 320GB SATA disk; wired Gigabit and wireless b/g/n networking — oh, and an HDMI port, which is also important to me.  The cost was very reasonable, list price 499 Swiss francs (about UK£335), but I have already seen it adverised at one of the major electronic chains here for 399 francs, and that was with a 720GB disk!

When I first opened the package, I was struck by how similar it is to my dm1-3105, with a few significant improvements.  First, instead of the ClickPad there is a normal TouchPad with discrete buttons (two separate buttons, not one on a rocker).  The surface of the touchpad is actually integrated with the palm rest, with a different texture, which seems a bit odd at first, but it took about one minute to forget about that and just use it. The wired network RJ45 connector is not hidden under a pain-in-the-rear plastic cover, which is a relief. Otherwise, the finish of the case is a sort of matte plastic rather than shiny metal/plastic, but I have no idea yet if that will make a significant difference in durability.

Then came the first bad news. I switched it on. Windows 8. Ugh. It's not as bad as I expected it to be, it's worse. I don't want to waste a lot of time on it here, so I will simply say that as far as I am concerned it is unusable, period.  It lasted about 36 hours on this new system before I simply wiped the disk and started over from scratch.

Then came the next bad news. This system does indeed have UEFI Secure Boot. Grrr. I don't know if it would have made a difference in my purchase decision if I had known this, but it might have, and in any case I would prefer to have been forewarned. Microsoft might think they can tighten the noose around user's necks by imposing this mis-feature, but I refuse to play along.

As it was, I went into BIOS setup (on HP this means press F10 during boot), found the Boot option settings, and changed Legacy Boot to Enabled.  That got it to the point where I could go to a boot selection menu (press F9 during boot), and then select a USB thumb drive with a Linux Live distribution to boot. I subsequently learned that there is still some limitation that I don't quite understand yet in the booting. I am able to install pretty much any distribution I want, but at the moment it only boots successfully from Fedora (either 17 or 18 Alpha/Beta). I'll go back and figure the rest of that out later, but for the moment I want to get this thing working, so booting the brand-new Fedora 18 Beta release is fine with me, and I can boot whatever other Linux distributions I want from the F18 Grub2 bootloader.

So, I was finally able to boot the brand spanking new Fedora 18 Beta release, from a Live USB stick. I was surprised to find that the Windows 8 configuration had set up the disk with a gpt (GUID Partition Table), but I'm quite pleased to get away from the antique MBR partition table and Primary/Extended partitions, so I left it that way. The Fedora installation was very simple, and without going into too much detail I will say that I really like the changes they have made to anaconda.  Installation took less than 10 minutes from booting the USB stick to rebooting the installed system.

Fedora seems to have handled all of the hardware with no problem; the two things I was concerned about were the Radeon HD7340 graphic controller (it is using the FOSS Radeon display driver) and the Ralink 3290 WiFi adapter (it is using the rt2800pci driver with rt3290.bin firmware). Everything else seems ok — sound, touchpad, keyboard, USB ports, HDMI, SD card slot and so on. I haven't come across anything that isn't working yet.

Once I had Fedora installed and configured, I decided to try a few other of my favorite Linux distributions. First up was openSuSE, which I have been using more than any of the others recently primarily because of digiKam). I have been trying the 12.3 pre-releases, so I had a Live USB stick handly. That booted with no problem (and amazingly fast), and also installed easily. Since I had already decided to let Fedora handle bootloading, I told openSuSE not to install a bootloader (this is done through the options in the final confirmation screen).

When the installation finished I booted the installed system, and as with Fedora 18, everything appears to work. By the way, the recent daily builds of openSuSE 12.3 picked up a lot of new artwork, and it looks really nice. By this time I was thinking this was really great, because usually when I surrender to an impulse and buy a brand-new just-released system, I have to struggle with drivers or configuration a bit (or sometimes a lot). So far it had been smooth sailing, and I am really liking the way this new system is working.

Next up was Linux Mint 14, my other favored distribution. The Live USB stick booted, and the installation process went smoothly. Obviously, none of these distributions was having any trouble at all with the gpt partition table. Installation completed normally, and I booted the installed system.

I finally ran into the first problem. Linux Mint doesn't have the necessary drivers and/or firmware for the Ralink 3290 WiFi adapter. This is almost certainly a question of the kernel version, as both Fedora 18 and openSuSE 12.3 are running 3.6.3 kernels, and Linux Mint 14 has 3.5.0 (as does Ubuntu 12.10). A quick web search brings up a lot of discussion about how to get the Ralink 3290 working with Linux Mint (and Ubuntu), so if you are determined to use either of those distributions, there are instructions available to get the wireless network going. For my purposes, I am happy with Fedora and/or openSuSE, so I am not going to worry about that right now. I'm sure the necessary support will be added, or they will simply update to the necessary kernel version, before long.

Last in the first round of Linux installations was Ubuntu 12.10. I personally wouldn't use this distribution, as I detest the Unity desktop, but I get asked about it a lot, and if this notebook turns out to be as good as it appears in these first few days, I am likely to want to get another one (or two, or more) to set up and pass along to friends, and in that case Ubuntu is often required. As with the previous distributions, the Live USB stick booted and the installer ran with no problem.

Since Linux Mint 14 is derived from Ubuntu 12.10, it was no surprise that the Ralink 3290 WiFi adapter didn't work on this distribution either. As I said above, there is plenty of discussion in the Ubuntu support area and forums about this, and tips on how to get the correct driver and firmware installed. Other than that, everything seems to work, just as it did with the other distributions.

One last thing before I wrap this up. How about some very simple speed comparisons? Here is the amount of time it takes from selecting the boot image to getting the login prompt, and from entering the login information to getting a usable desktop:

In summary, I am very pleased with this new notebook. Once I got the nasty Windows rubbish off of it, and enabled Legacy Boot in the BIOS so that I could boot the Linux Live media, it really works well. It seems noticeably faster than its precedessors (probably mostly down to the AMD E2 CPU), and not only is the blasted ClickPad gone, I also have the feeling that the keyboard is much more comfortable than the previous ones were. If this keeps up I am likely to take the SSD drive out of the Acer AO522 I have been using for a while, and put it into this system.