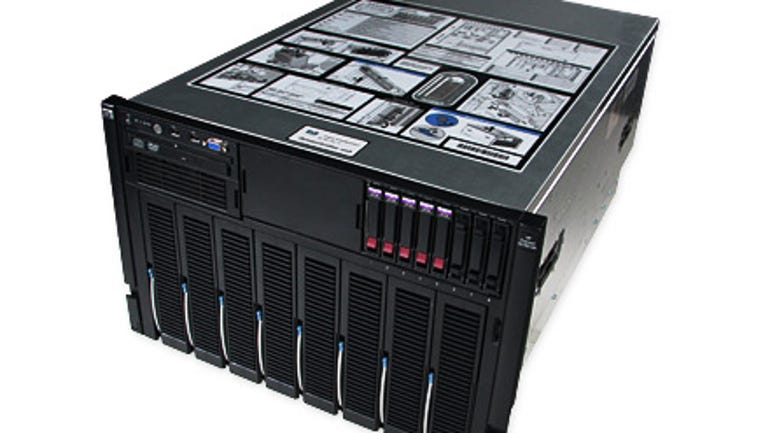 <p>Focusing on PC hardware, accessories and business products, Craig Simms is responsible for identifying new opportunities for the reviews channels on CNET Australia and ZDNet Australia, to better serve the readers. He has written about a vast range of technology since 2001, covering the gamut from print to online, hardware to software, consumer to enthusiast, the gaming world to workstations.

preview HP's Proliant DL785 is a behemoth server. Coming with two handles on either side, this 7RU machine definitely needs two people to move anywhere.

The extra height is accounted for by the fact that this is an eight-CPU machine. Each processor is contained within a removable "cell" underneath the machine and paired with DDR2-6400 RAM. Our review machine contained eight six-core Opteron 8439 SE processors at 2.8GHz, each paired with 32GB RAM for a total of 256GB available system memory and 48 cores of processing power. You can fit in up to 512GB RAM if you find that's not enough. All of this is pumped through Broadcomm's Serverworks HT-2100 (PDF) Northbridge and HT-1000 Southbridge chipsets.

While the cells are removable, don't get excited: they're not hot-swappable. Yank one, and the whole system will go down just as you'd expect any other server to.

Our review sample came with five 146GB 15K RPM SAS drives, with room for another 11 if need be. You can spot the CPU cells under the drives.
(Credit: CBS Interactive)

These cells dominate the front of the machine, leaving the storage, activity/warning lights and two USB ports situated at the top to pale in comparison. This is a machine intended for pure processing grunt, positioning itself for consolidation and virtualisation.

The back is relatively sparse, with just a VGA and serial port, two USB ports, twin gigabit Ethernet controllers (courtesy of the on-board, Broadcomm powered HP NC371i) and an RJ45 jack for iLO. HP handily includes a T-15 torx tool on the back too, since it tends to use these rather than your standard Philips head.

There are three 120mm high-powered removable fan units at the rear, which can be pulled out on a sled and replaced; another three are inside the machine itself. All of them contain dual fans, protecting against mechanical failure. Next to this are six hot-swappable 1200W power supplies, three of which are required to power the machine, the other three redundant in case of failure.

The mainboard is relatively sparse, allowing for expansion — most of the action is on the daughterboard and controller cards. (Credit: CBS Interactive)

Opening up inside reveals a spacious interior and a fairly uncomplicated mainboard, built purely for expansion. The motherboard features three PCI-E x16 and x8 slots, and five PCI-E x4 slots — everything else is pretty much confined to a daughterboard and the processor memory cells.

You can have an optional backplane installed which contains two HTx x16 slots, one PCI-E x16 slot and PCI-E x8 slot and five PCI-E x4 slots; however, this is not supported under VMware.

The daughterboard pictured above contains most of the chipsets. The embedded ATI ES1000 video chip offers resolutions up to 1280x1024 at 32-bit (an optional Nvidia Quadro FX5600 1.5GB card is available); you can also spot HP's iLO for remote admin and the dual Broadcomm chips powering the integrated dual-GbE, while to the right is the internal USB port. Although not pictured, the top right of the board features an LSI SAS1078 controller and 512MB RAM — the heart of the HP Smart Array P400 that manages the storage.

The CPU and RAM cells can be removed in a similar way to removable hard drive trays — simply pop the lever and pull. (Credit: CBS Interactive)

One of the Qlogic FC controllers (Credit: CBS Interactive)

The initial screen from HP's SmartStart boot DVD. You can run a number of configuration and testing tools from here, as well as install operating systems. (Credit: CBS Interactive)

HP includes a "SmartStart", Linux-based boot DVD, which allows you to configure the storage array, run hardware diagnostics and tests. You can also install operating systems from here, in both HP branded and non-branded forms. Apart from the OS installation, these tools are available under Windows too, accessible remotely or locally.

<p>Focusing on PC hardware, accessories and business products, Craig Simms is responsible for identifying new opportunities for the reviews channels on CNET Australia and ZDNet Australia, to better serve the readers. He has written about a vast range of technology since 2001, covering the gamut from print to online, hardware to software, consumer to enthusiast, the gaming world to workstations.